This study proposes an algorithm that controls an autonomous, multi-purpose, center-articulated hydrostatic transmission rover to navigate along crop rows. This multi-purpose rover (MPR) is being developed to harvest undefoliated cotton to expand the harvest window to up to 50 days. The rover would harvest cotton in teams by performing several passes as the bolls become ready to harvest. We propose that a small robot could make cotton production more profitable for farmers and more accessible to owners of smaller plots of land who cannot afford large tractors and harvesting equipment. The rover was localized with a low-cost Real-Time Kinematic Global Navigation Satellite System (RTK-GNSS), encoders, and Inertial Measurement Unit (IMU)s for heading. Robot Operating System (ROS)-based software was developed to harness the sensor information, localize the rover, and execute path following controls. To test the localization and modified pure-pursuit path-following controls, first, GNSS waypoints were obtained by manually steering the rover over the rows followed by the rover autonomously driving over the rows. The results showed that the robot achieved a mean absolute error (MAE) of 0.04 m, 0.06 m, and 0.09 m for the first, second and third passes of the experiment, respectively. The robot achieved an MAE of 0.06 m. When turning at the end of the row, the MAE from the RTK-GNSS-generated path was 0.24 m. The turning errors were acceptable for the open field at the end of the row. Errors while driving down the row did damage the plants by moving close to the plants’ stems, and these errors likely would not impede operations designed for the MPR. Therefore, the designed rover and control algorithms are good and can be used for cotton harvesting operations. View Full-Text
Keywords: robotics; GNSS; cotton robotics; autonomous navigation; RTK; ROS robotics; GNSS; cotton robotics; autonomous navigation; RTK; ROS
►▼ Show Figures 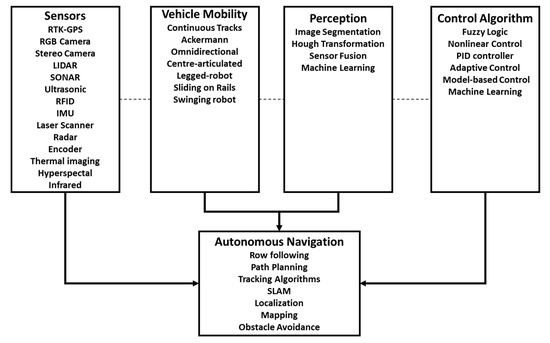