Investigation of the Effect of the Skull in Transcranial Photoacoustic Imaging: A Preliminary Ex Vivo Study

Although transcranial photoacoustic imaging (TCPAI) has been used in small animal brain imaging, in animals with thicker skull bones or in humans both light illumination and ultrasound propagation paths are affected. Hence, the PA image is largely degraded and in some cases completely distorted. This study aims to investigate and determine the maximum thickness of the skull through which photoacoustic imaging is feasible in terms of retaining the imaging target structure without incorporating any post processing. We identify the effect of the skull on both the illumination path and acoustic propagation path separately and combined. In the experimental phase, the distorting effect of ex vivo sheep skull bones with thicknesses in the range of 0.7~1.3 mm are explored. We believe that the findings in this study facilitate the clinical translation of TCPAI.
Keywords: transcranial; skull bone; aberration; photoacoustic; distortion; brain imaging transcranial; skull bone; aberration; photoacoustic; distortion; brain imaging

The PAI system used in this study composes of Phocus MOBILE, a 10 Hz Nd:YAG tunable laser (OPOTEK, Carlsbad, CA, USA) in the range 690 to 900 nm, that is controlled by an internal optical parametric oscillator (OPO). A silica fiber bundle consisting of 100 fibers with a total diameter of 1 cm has been used for light delivery. The average output energy at the fiber end was measured as ~20 mJ using an energy meter (QE12SP-H-MT-D0, Gentec-EO, Quebec, QC, Canada). The spot size was 8 mm on the skull piece, and the spot size on the target could not be measured since it was embedded in the phantom. Considering the numerical aperture of the optical fiber, the divergence of the light was ~30°.
Since the acoustic window near the temporal or occipital region is with a diameter of ~3 cm [67], phased array transducers are preferred. A phased array sensing surface has a smaller footprint area as compared to linear and curvilinear arrays. Moreover, a phased array provides a wider field of view and it has dynamic focusing capabilities, which increase the flexibility of scanning without or with a minimal mechanical movement of the array. We used a 64-element phased array P4-2 transducer probe (Philips Healthcare, Ville Platte, LA, USA) with a 2.5 MHz center frequency. The transducer was held in water inside an open top box using clamps. The clamps were attached to a two-axis mechanical stage for scanning. The probe was scanned in the y-axis to cover a distance of 2 cm with 48 total steps and a step size of 0.4 mm. The Vantage 128 imaging platform (Verasonics Inc., Kirkland, WA, USA) was used for the data acquisition and image processing.

There are structural differences between the sheep skull and human skull in terms of thickness, content, and architecture. Despite the differences, the structural components (diploe, outer, and inner table) in human and sheep skulls are similar. Here, we evaluate the effect of skull thickness on the reconstructed PA image; therefore, maintaining the skull thickness is important. To achieve similar thicknesses of the human skull at different ages, we have chosen the frontal skull bone of sheep head and mechanically configured the sheep skull to be flat and representative of human skull thicknesses. Three different skull thicknesses of 0.7, 1.0, and 1.3 mm were used. The skull samples were collected from ex vivo sheep heads. Using a Hole Dozer general purpose circular saw (Milwaukee Electric Tool, Brookfield, WI, USA), skull pieces with a diameter of 5 cm were cut. Later, 1.5 cm areas on the skull pieces were thinned down to the desired thickness using a drill bit. The thickness of each skull sample after preparation was measured using a H-2780 digital screw gauge (ULINE, Milton, ON, Canada) at 5 different points and averaged.

We embedded an imaging target in a brain tissue-like mimicking phantom with optical properties similar to those of the brain tissue. To determine the light attenuating characteristics of the brain tissue, slices of sheep brain with a thicknesses between 0.5 and 1.75 cm were prepared. The experimental setup is shown in Figure 2. The ex vivo brain tissue was held on a metal plate with a circular hole. An energy meter (QE8SP-B-BL-INT-D0, Gentec-EO Inc., Quebec City, QC, Canada) was coaxially aligned to the optical fiber bundle through the hole; the surface of the sensor was protected with an optically transparent thin film. The brain tissue-mimicking phantom was realized by mixing gelatin (to represent the acoustic properties) and sugar-free psyllium hydrophilic mucilloid fiber (Metamucil, P&G, Cincinnati, OH, USA) (to represent the tissue optical attenuation and echogenicity). First, 8% gelatin was dissolved in water, followed by 4% fiber in a transparent one-side-open cubic acrylic box (Lanscoery, Monterey Park, CA, USA) [68]. Tissue-mimicking phantoms with thicknesses of 1, 2, 3, 4, and 5 cm were prepared.
Next, we evaluated the effect of skull as a dispersive barrier in three paths: (i) light illumination, (ii) acoustic propagation, and (iii) both light illumination and acoustic propagation (see Figure 3a–c). The imaging target was a square loop of a 0.5 mm-thick copper rod covered with an insulating dark jacket, polyactic material (see Figure 4c), and held in the tissue-mimicking phantom mixture at a 20° angle versus the probe viewing plane at a 1 cm distance from the surface of the phantom. We initially tried to implement a 3D structure of blood vessels embedded within the gelatin phantom. Since the blood vessels were positioned in a three-dimensional coordinate, we could not inject blood evenly inside the blood vessels. This made the evaluation of the results difficult. We then used a thin plastic tube to represent the blood vessels. In addition to the fact that these tubes had additional absorption, the stationary blood within the tubes started forming sediment at the bottom of the tube. Therefore, we utilized a solid imaging target instead of the actual blood vasculature. According to the literature, the absorbance of polyactic material (with a normalized absorbance ~25% [69]) at the imaging wavelength of 690 nm is close to the absorbance of blood (with the normalized absorbance of ~20% [70]).
The ultrasound probe was horizontally scanned across the imaging target by manually rotating the x-axis knob of the x-y stage with a step size of 1 mm. Each 3D image was comprised of 50 2D B-scan images, which were later compiled into a 3D volume in Slicer 4.10 [71]. In the 3D slicer, the projection of the 3D volume was automatically adjusted to the default intensity range and, therefore, the intensity map had to be corrected. The process of correcting the intensity projection is as follows. Initially, we selected a B-scan frame for each configuration, where a specific portion of the square loop can be visualized without any post-processing; in this case, we have chosen the B-scan frames that correspond to the light green and orange dotted region of interests (ROIs), as shown in Figure 3. We then calculated the average intensity value of those specific frames and, later, applied them as a gain (intensity modifier) to the corresponding 3D volumes to project the corrected intensity map.

We evaluated the PA images quantitatively in terms of the average intensity attenuation (AIA), smoothness (S), and image distortion (ID). These parameters were evaluated for the entire region on the square loop imaging phantom. AIA is defined as the averaged intensity in the specified area; S (can be viewed as lack of roughness) is extracted from the line profile across the specified ROI with and without the skull PA images, and is defined as the correlation between the peak values of the corresponding normalized line profiles. ID is defined as sum of the square of the regression (SSR) of the rising and falling edges of the line profile in the US image. Additionally, the image distortion in the PA images was defined as the difference between the contour profile of the PA image with and without the presence of the skull.
The processing protocol was as follows. The imaging target orientation was such that the light blue ROIs (indicated in both Figure 3 and Figure 4c) were closest to the surface of the US probe (~4.5 cm) and the dark blue ROIs were the furthest away (~6 cm). We initially extracted several line profiles within the light green and orange ROIs (indicated in Figure 3 and Figure 4c) and averaged them. The averaged line profile represents the signal intensity decay as a function of the distance between the imaging target and the transducer probe (i.e., 4.5 to 6 cm). Next, we extracted several parallel line profiles within each of the light and dark blue ROIs. The average and standard deviations of the extracted values 4.5, 5, 5.5, and 6 cm were presented in tables and figures. It is of note that the transducer probe was scanned in one direction. As a result, the light green and orange ROIs are located along the lateral plane of the transducer surface, and hence the entire ROI can be visualized in a 2D image, whereas the light and dark blue ROIs are seen as moving dots (due to the location of the ROIs in the cross-sectional imaging plane). Therefore, the light green and orange ROIs are represented by large rectangular boxes, whereas the light and dark blue ROIs are represented by small rectangular boxes.

While photoacoustic imaging has shown great promise in the transcranial brain imaging of small animals, it is still underdeveloped for clinical us due to the presence of the skull. We studied the distorting effect of the skull when it is in the optical illumination path, acoustic detection path, and both simultaneously. We determined the maximum thickness of the skull through which PAI is feasible, such that the structure of the imaging target with no post processing is distinguishable; this thickness was ~0.7 mm. Utilizing sophisticated reconstruction algorithms as well as signal/image enhancement techniques [42,82,83,84,85,86], imaging through thicker skull tissues will be possible. Due to the complexity of creating flat cortical and trabecular layer tissues, we studied the combined effect of the skull layers on the acoustic distortion and optical attenuation. We concluded that the average intensity attenuation and distorting effect of the skull due to the blockage of the acoustic path is ~2.5% less and ~39.3% greater than those of the illumination path, respectively. These results can help in designing a more efficient photoacoustic imaging system suitable for transcranial brain imaging. 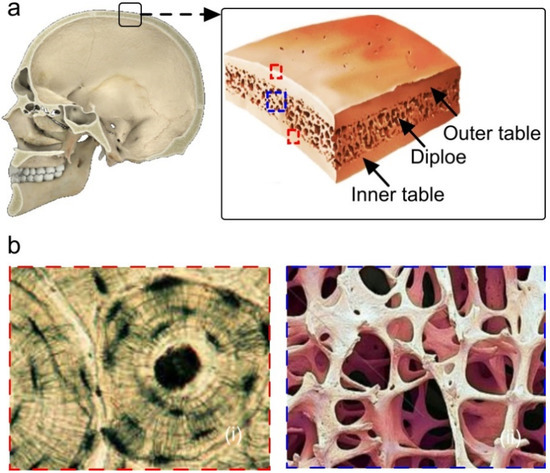 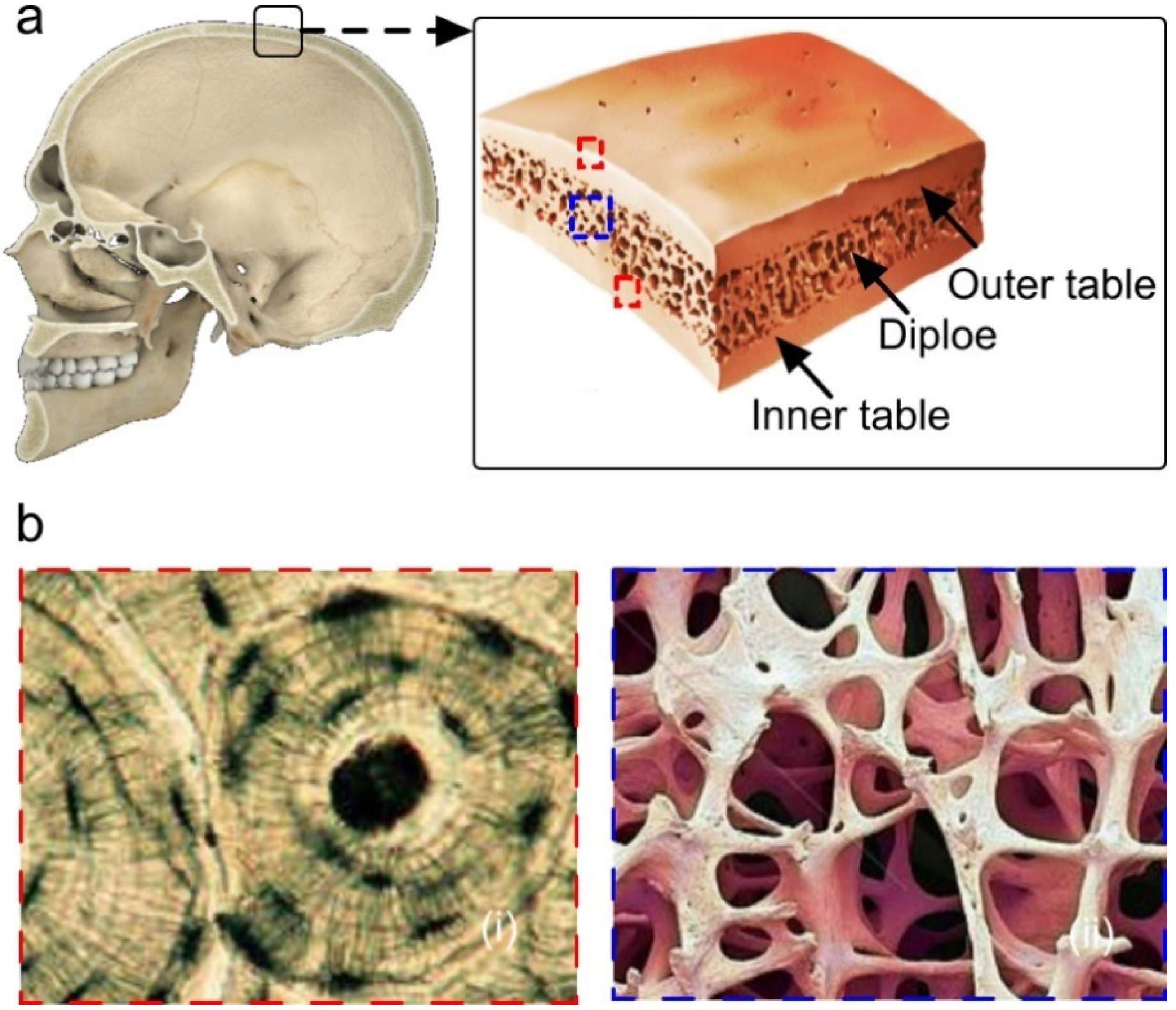 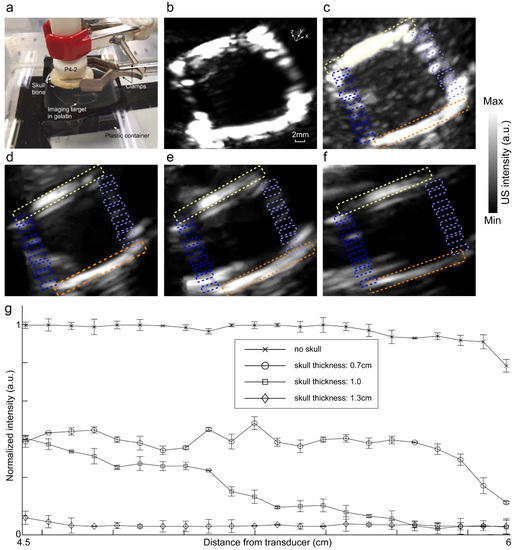 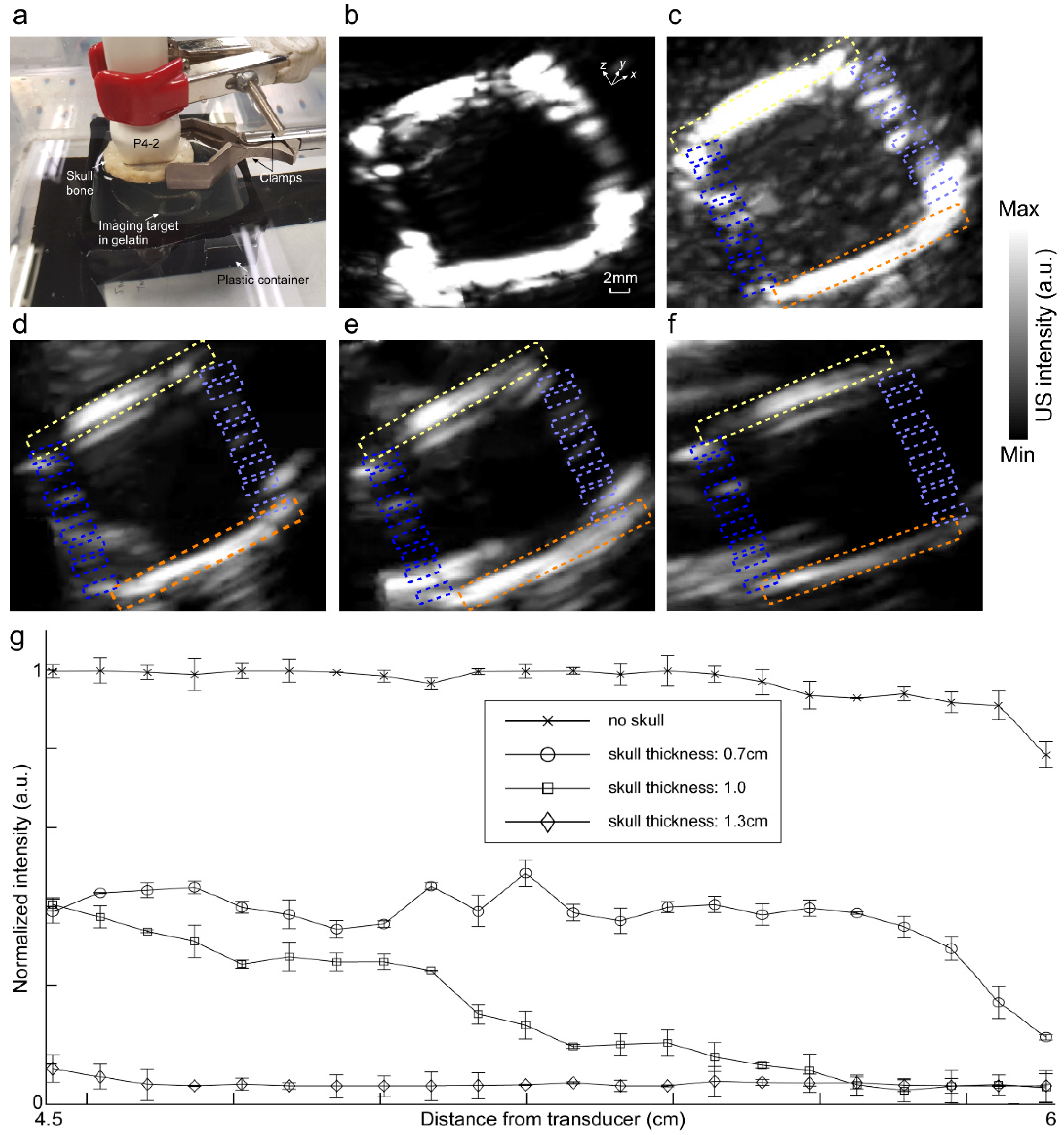 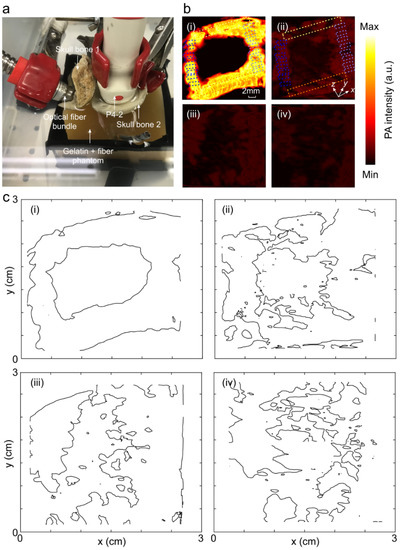 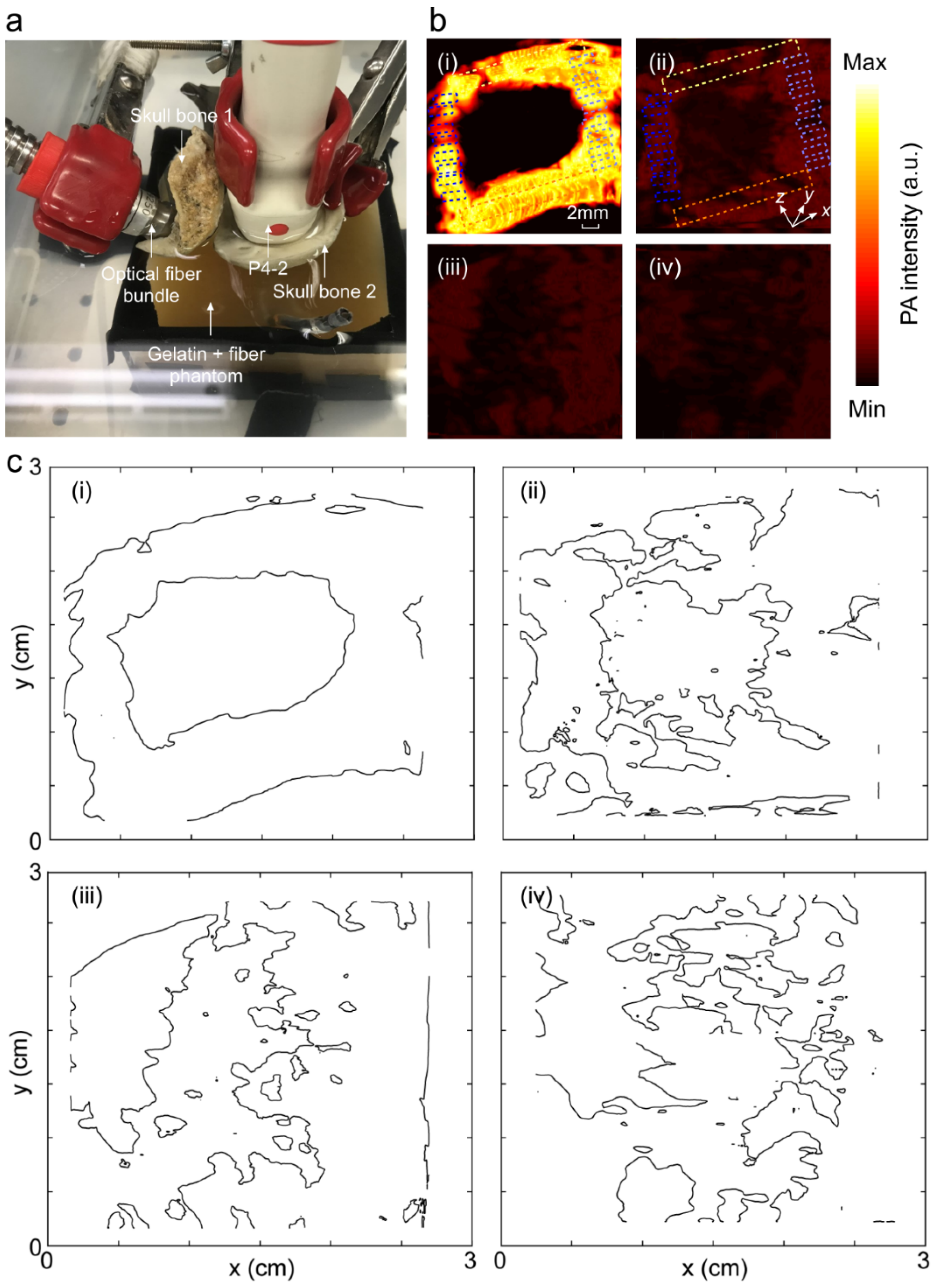