The Life of a New York City Noise Sensor Network

Noise pollution is one of the topmost quality of life issues for urban residents in the United States. Continued exposure to high levels of noise has proven effects on health, including acute effects such as sleep disruption, and long-term effects such as hypertension, heart disease, and hearing loss. To investigate and ultimately aid in the mitigation of urban noise, a network of 55 sensor nodes has been deployed across New York City for over two years, collecting sound pressure level (SPL) and audio data. This network has cumulatively amassed over 75 years of calibrated, high-resolution SPL measurements and 35 years of audio data. In addition, high frequency telemetry data have been collected that provides an indication of a sensors’ health. These telemetry data were analyzed over an 18-month period across 31 of the sensors. It has been used to develop a prototype model for pre-failure detection which has the ability to identify sensors in a prefail state 69.1% of the time. The entire network infrastructure is outlined, including the operation of the sensors, followed by an analysis of its data yield and the development of the fault detection approach and the future system integration plans for this. View Full-Text
Keywords: sensor; network; noise; environmental; monitoring; smart cities; IoT; internet of things sensor; network; noise; environmental; monitoring; smart cities; IoT; internet of things
►▼ Show Figures 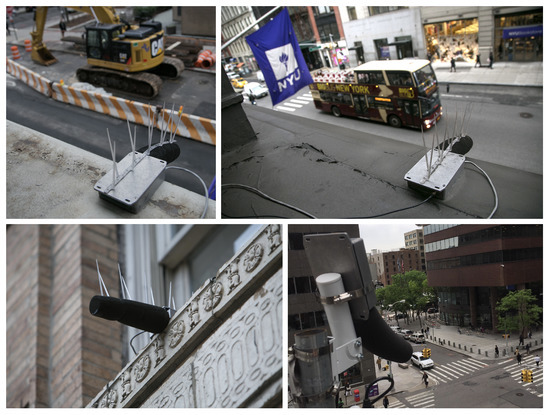