Dissecting and Interpreting a Three-Dimensional Ground-Penetrating Radar Dataset: An Example from Northern Australia

A robust 3-D GPR dataset provides interpreters with a variety of methods for extracting important information at buried archaeological sites. An iterative approach that uses reflection profile analysis, amplitude slice-mapping, and often both in conjunction is often necessary as neither method by itself is sufficient. In northern Australia, two constructed mounds contain a number of cultural and geological horizons and features, which can be imaged with GPR. The reflection profiles display the modified ground surface prior to mound construction and some initial construction layers. On the pre-mound surface, amplitude maps of reflective layers that were built-up on the ground surface indicate that they were constructed in an intentional manner. Those surfaces were later covered by sand to produce mounds used for human burial. Human internments in the mound can only be seen in reflection profiles, but once discovered, the profiles can be re-sliced to produce high definition amplitude images of these remains. No one method of analysis can provide an overall interpretation of these complex internal mound features. When the methods are varied, depending on the results of one method, a detailed and varied analysis of certain aspects of the mounds’ internal features are visible, leading to the generation of a number of hypotheses about how this area of northern Australia was used in the past. The 3-D data from GPR shows that this area was an important location on the landscape in the past, and was modified by the construction of a monumental mound, which was then used for human burials, and more recently, the construction of what was likely a ritual enclosure. View Full-Text
Keywords: ground-penetrating radar; reflection profile analysis; amplitude mapping; burial mounds; northern Australia ground-penetrating radar; reflection profile analysis; amplitude mapping; burial mounds; northern Australia
►▼ Show Figures 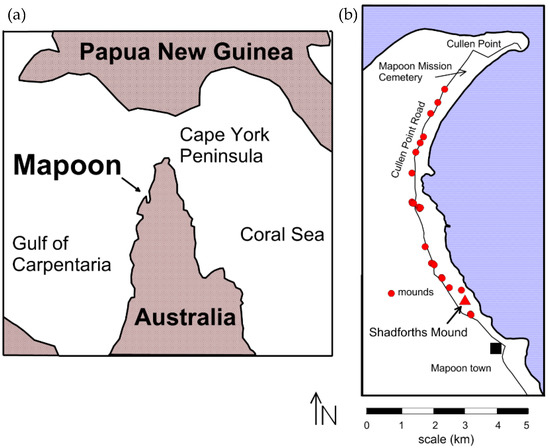