The Progress of Glucose Monitoring—A Review of Invasive to Minimally and Non-Invasive Techniques, Devices and Sensors
Previous Article in Special Issue

Worldwide consumption of coffee exceeds 11 billion tons/year. Used coffee grounds end up as landfill. However, the unique structural properties of its porous surface make coffee grounds popular for the adsorption of gaseous molecules. In the present work, we demonstrate the use of coffee grounds as a potential and cheap source for biochar carbon. The produced coffee ground biochar (CGB) was investigated as a sensing material for developing humidity sensors. CGB was fully characterized by using laser granulometry, X-ray diffraction (XRD), Raman spectroscopy, field emission-scanning electron microscopy (FESEM), X-ray photoelectron spectroscopy (XPS), thermogravimetric analysis (TGA) and the Brunnauer Emmett Teller (BET) technique in order to acquire a complete understanding of its structural and surface properties and composition. Subsequently humidity sensors were screen printed using an ink-containing CGB with polyvinyl butyral (PVB) acting as a temporary binder and ethylene glycol monobutyral ether, Emflow, as an organic vehicle so that the proper rheological characteristics were achieved. Screen-printed films were the heated at 300 °C in air. Humidity tests were performed under a flow of 1.7 L/min in the relative humidity range 0–100% at room temperature. The initial impedance of the film was 25.2 ± 0.15 MΩ which changes to 12.3 MΩ under 98% humidity exposure. A sensor response was observed above 20% relative humidity (RH). Both the response and recovery times were reasonably fast (less than 2 min). View Full-Text
Keywords: waste coffee ground; biochar; humidity sensor; pyrolysis; impedance waste coffee ground; biochar; humidity sensor; pyrolysis; impedance
►▼ Show Figures 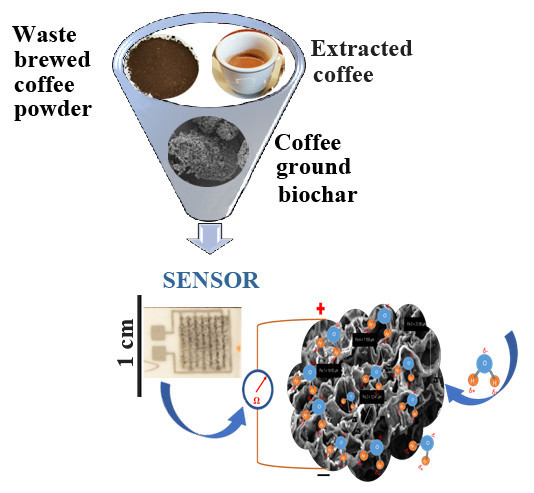