:
In substations, a localization system based on a wireless sensor network (WSN) is a challenge, because the propagation of the measured signal could be blocked by various devices. In other words, non-line-of-sight (NLOS) propagation, where the signal propagation path is occluded, will affect measurement accuracy. A novel localization method based on a two-step weighted least squares and a probability distribution function is proposed to reduce the influence of NLOS error on the localization result. In this method, the initial multi-group localization result is obtained by the two-step weight weighted least-squares method, and the probability distribution function of the target is constructed by using the initial localization results, which can effectively reduce the influence of the NLOS error on the localization result. The simulation and test results show that the proposed method can keep the coordinate error within 30 cm in the substation. Compared with the localization result of two-step weighted least-squares (TSWLS) method, the average localization error is reduced by more than 1 m. Compared with the other two similar algorithms, the localization accuracy is improved by more than 50%. The tested results show that the localization performance of the method is robustness in the NLOS environment of the substation. While ensuring stability, the proposed algorithm is less efficient than some existing ones. However, under the calculation conditions of ordinary computers, the average single-point calculation time is less than 0.1 s, which can meet the needs of applications in substations.
Keywords:
substation; wireless sensor network (WSN); moving target; non-line-of-sight (NLOS); probability distribution

To obtain a more effective localization algorithm, Equation (4) is transformed into a linear equation, and then the optimal estimation is obtained by the two-step weighted least-squares (TSWLS) [6] method as the initial localization result.
Simultaneously squaring the two sides of Formula (3), we can obtain:
Then substitute Equation (1) into Equation (5).
And we can express Equation (6) in the form of a vector:
Subtracting both sides of Equation (7) by r12, we can get:
Sort out the two sides of Equation (8), we can get:
Ignoring the quadratic term of the error term in Equation (9) and organize it into a matrix form:where
Equation (10) is linearized from a nonlinear equation to a linear equation. We can get the coordinates U of the target from φ. The least-squares (LS) method can be used to obtain the best estimate of φ :
Here Ψ is the weighting matrix of Equation (11), Ψ = E (ηηT) = c2BQB, where Q is a diagonal matrix with a diagonal element of 0.5σ2. It represents an error covariance matrix. Ψ is not known in practice as B contains the true distances between source and receivers. Further approximation is necessary to solve the problem. According to the fact that the difference between the two sides of the triangle is smaller than the third side, we know that ri−r2 is less than the distance between the two sensors. The distance between the sensors is fixed. When the distance of the localization target distance sensor is greater than 20 times the distance between the sensors, the difference between any two ri will be less than 5% of the corresponding ri, and it can be seen that each ri is equal, so we can assume that B ≈ r2I, I is an identity matrix. Equation (11) can be approximated as:
And then an estimated value of r1 can be obtained by using Equation (12). After that we can use r1 to calculate the estimated value of ri. From which matrix B can be obtained. Then matrix B can be substituted into Equation (11) to obtain the position estimation result.
When using (11) to estimate the position of the target, in a LOS condition, the root mean squared error (RMSE) of the localization result can be close to the Cramer–Rao bound [32], and the calculation is very simple. With the increase of the measured value, the two-step LS method can use the measurement data of the redundant base station to improve the localization accuracy. However, in the case of a large LOS measurement error or NLOS propagation, the localization accuracy of the two-step linear LS method cannot be guaranteed. Consequently, one must perform the initial solution of Equation (10). To achieve precise localization in the complex environment of substation, the results need to be further optimized based on the initial estimation. Here, a probability distribution function is introduced to further improve the position estimation.

2.5. Steps of the Localization Method

A novel localization method based on TSWLS and probability distribution function is adopted here. The specific flow chart of the proposed method is shown in Figure 1, which can be further elaborated as follows:
Step 1: A coordinate system is established in the substation, and the localization base station is arranged at the designated position. Obtaining the time difference between the signal emanated from the target to be located and each base station
Step 2: Screening the base station. When the number of base stations participating in the location of the target is greater than 9, the appropriate localization base station is selected by using the procedure described in Section 2.4. When the number of base stations is less than or equal to 9, all base stations are selected as the localization base station;
Step 3: Grouping of measured values. From the N (N > 4) localization base stations obtain N − 1 measurement values as described earlier. Formulate data combinations (O1, O2, …, Oj, …, OU) containing four measured values. Then calculate the reference point (xOj, yOj, zOj) of each data combination;
Step 4: Initial Localization. According to Equation (11) and Equation (12), the position estimates of the different data combinations are obtained. The solution of the equations can be expressed as (xpj, ypj, zpj), and the space vector group is established by Equation (13).
Step 5: Using the probability distribution function to process the initial localization result. The spatial probability distribution model is established by Equations (14)–(17), and the point where the error probability in space is the smallest is set as the coordinate of the target to be located.

To verify the localization performance of the proposed algorithm, this section carries out a simulation study on the 3 existing algorithms, namely the algorithm proposed in the paper, the TSWLS [6] algorithm, residual weighted (RWGH) [34] algorithm, and the residual test (RT) [17] algorithm. The two-step WLS algorithm uses the LS method to estimate the position of the target, and is generally used for localization under LOS conditions. The RWGH algorithm weights different results by the residual of the initial localization result to reduce the influence of the NLOS error. The RT algorithm compares the calculated residual with a set threshold to identify the NLOS base station in the environment. Then, by removing the measurement data obtained by the NLOS base station, the purpose of improving the accuracy of the algorithm is achieved.
The simulation results are compared and analyzed to verify the superiority of the proposed algorithm.

This research was funded by State Grid Corporation Headquarters Science and Technology Project, grant No. 546816180001. 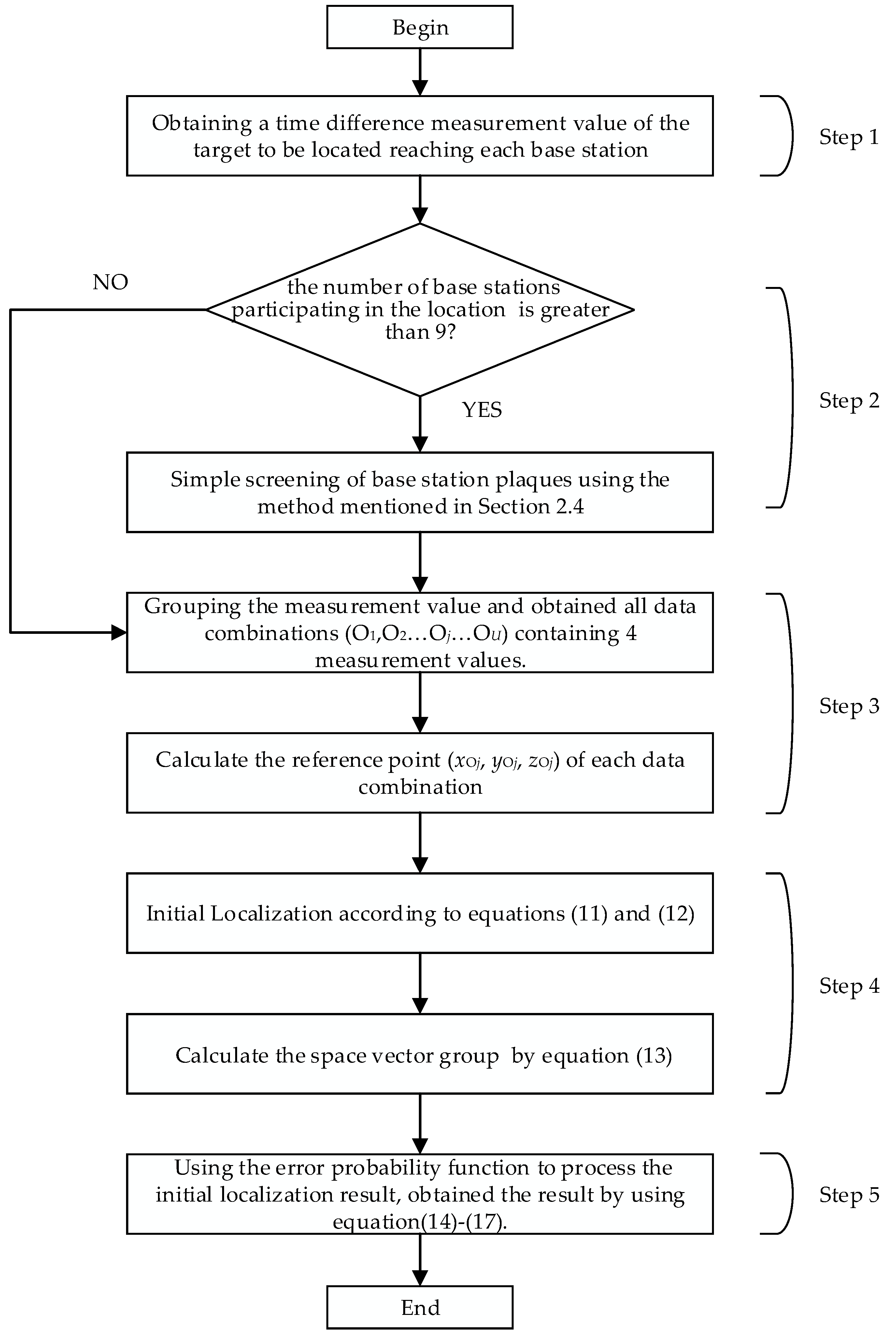 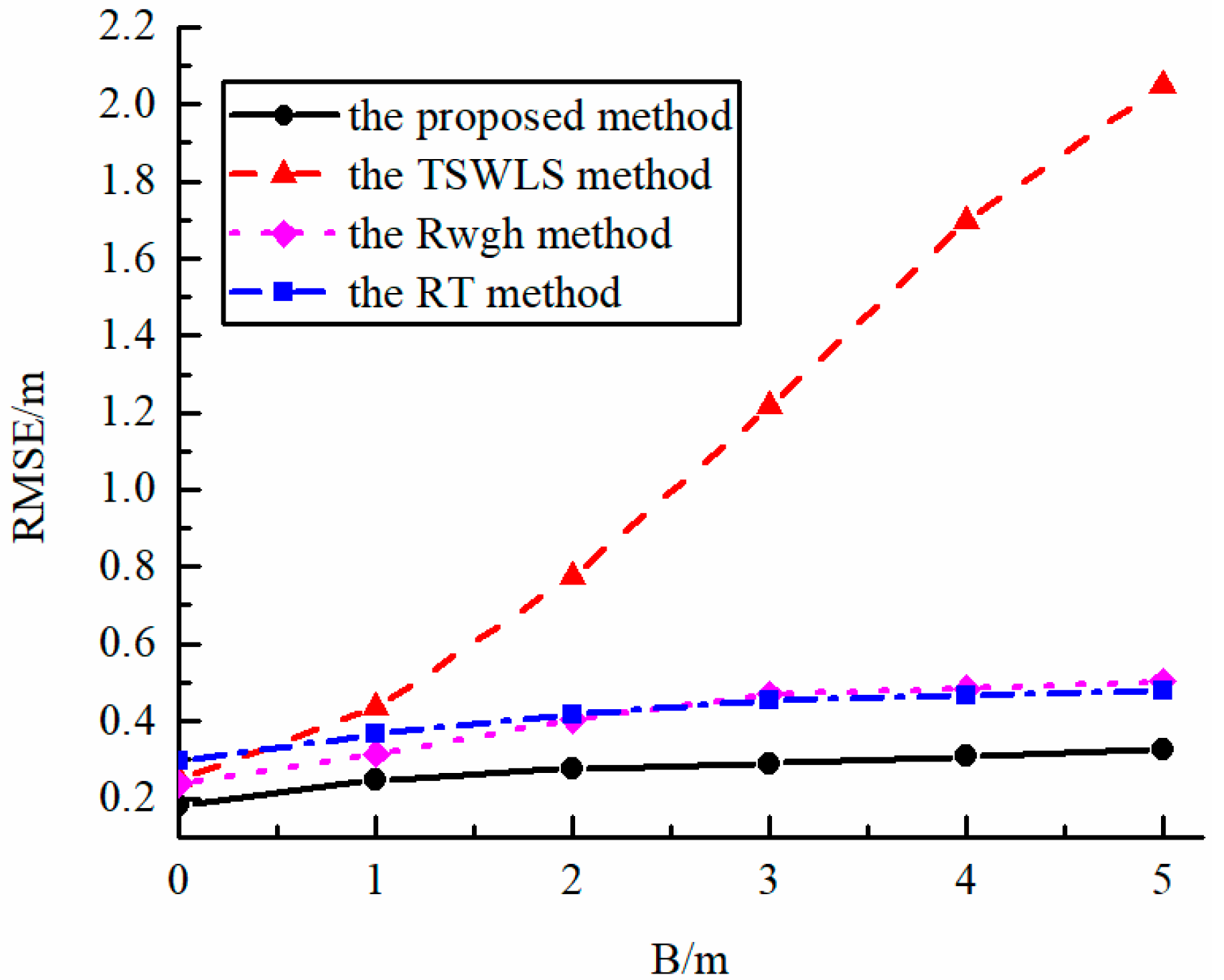 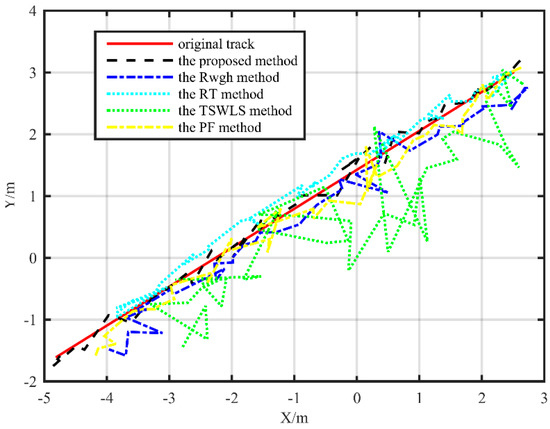 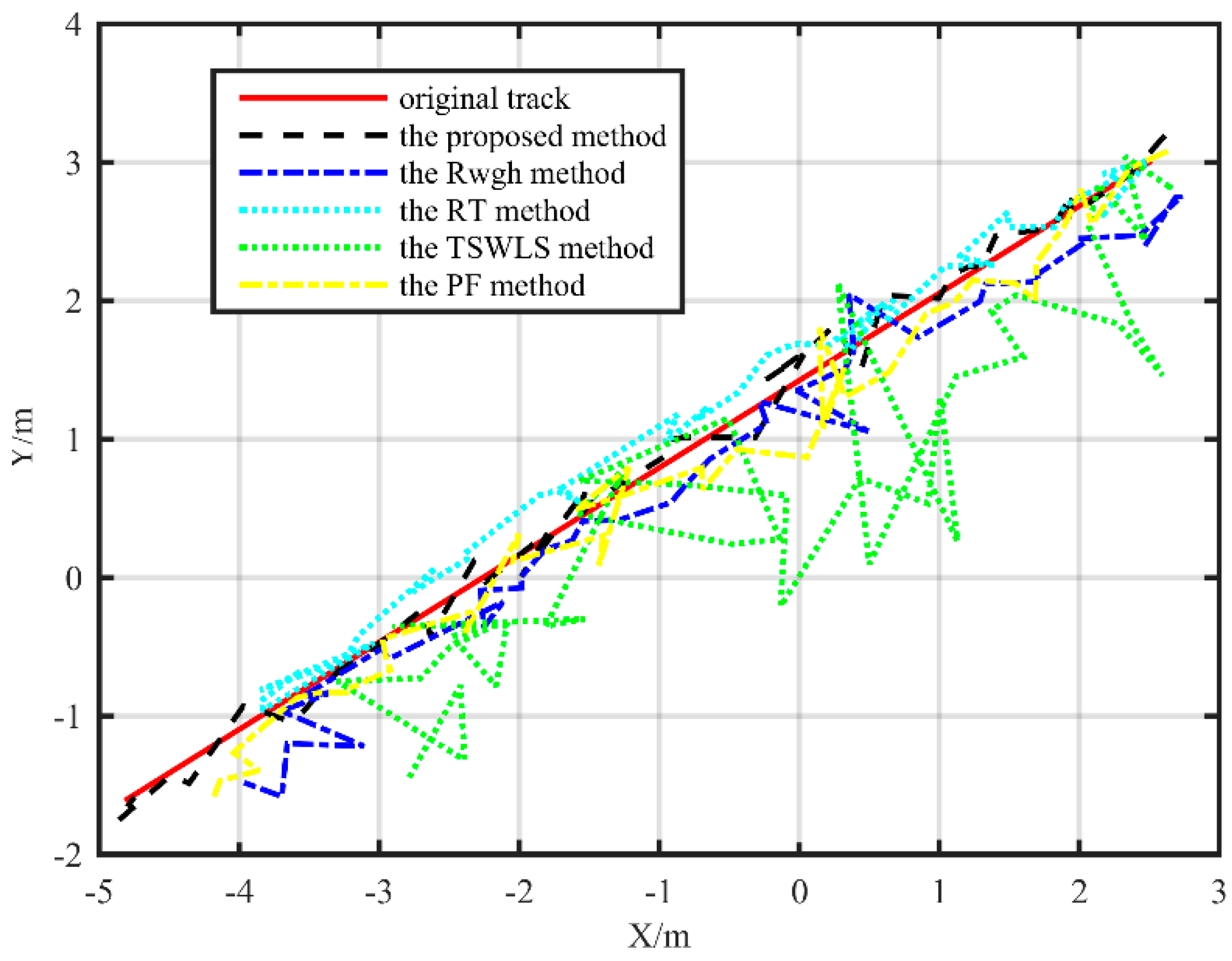 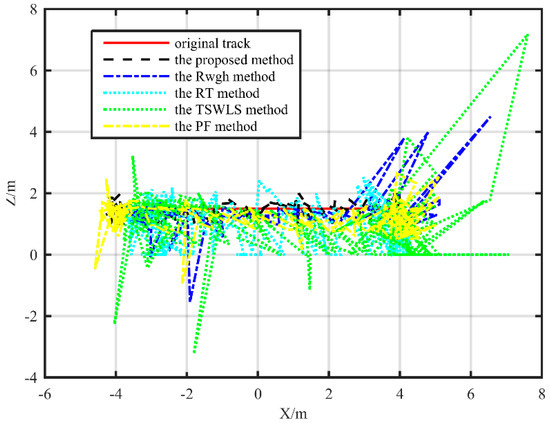 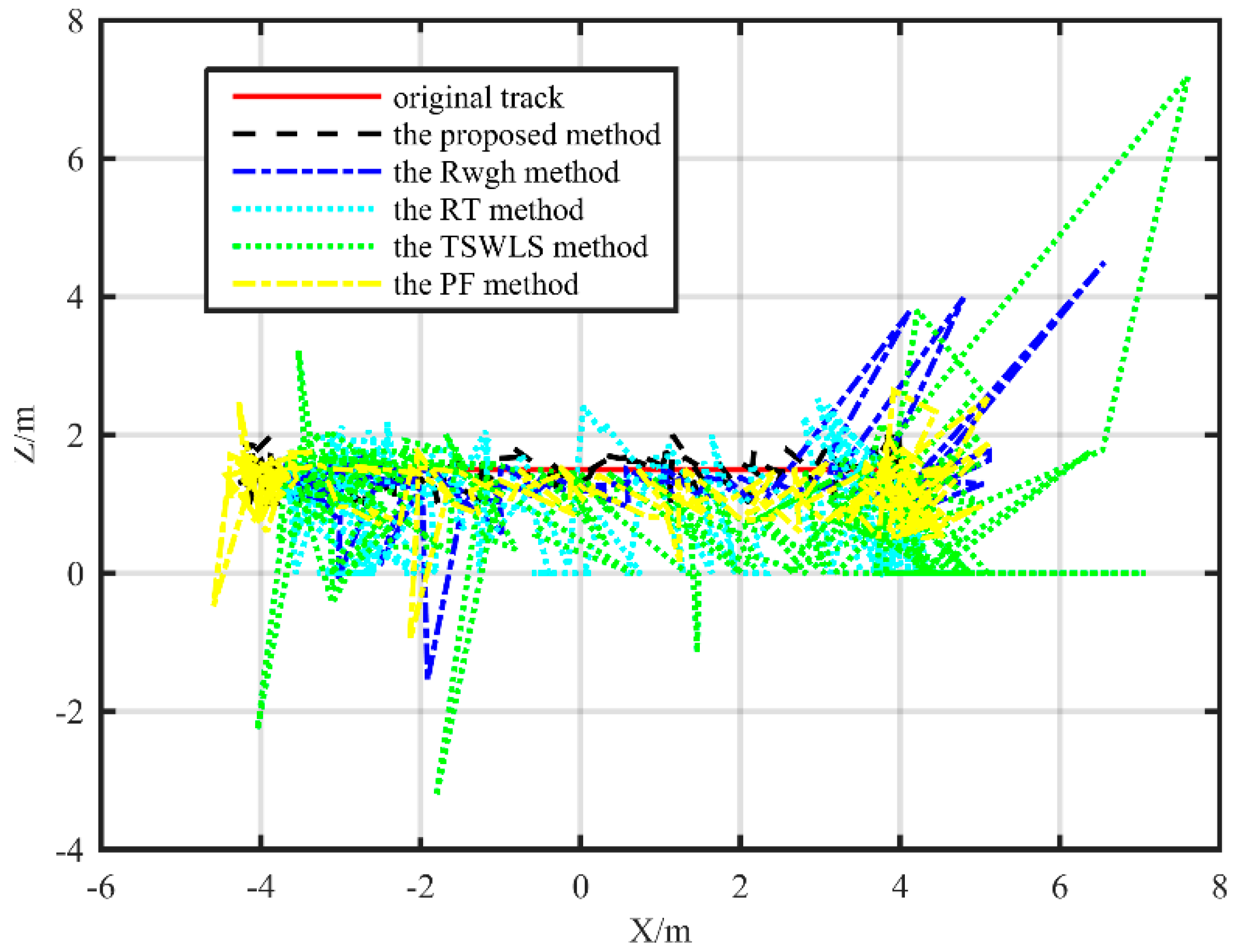