Ambient Intelligence in the Living Room
Previous Article in Journal

A Multi-Protocol IoT Platform Based on Open-Source Frameworks

By coupling a robot to a smart environment, the robot can sense state beyond the perception range of its onboard sensors and gain greater actuation capabilities. Nevertheless, incorporating the states and actions of Internet of Things (IoT) devices into the robot’s onboard planner increases the computational load, and thus can delay the execution of a task. Moreover, tasks may be frequently replanned due to the unanticipated actions of humans. Our framework aims to mitigate these inadequacies. In this paper, we propose a continual planning framework, which incorporates the sensing and actuation capabilities of IoT devices into a robot’s state estimation, task planing and task execution. The robot’s onboard task planner queries a cloud-based framework for actuators, capable of the actions the robot cannot execute. Once generated, the plan is sent to the cloud back-end, which will inform the robot if any IoT device reports a state change affecting its plan. Moreover, a Hierarchical Continual Planning in the Now approach was developed in which tasks are split-up into subtasks. To delay the planning of actions that will not be promptly executed, and thus to reduce the frequency of replanning, the first subtask is planned and executed before the subsequent subtask is. Only information relevant to the current (sub)task is provided to the task planner. We apply our framework to a smart home and office scenario in which the robot is tasked with carrying out a human’s requests. A prototype implementation in a smart home, and simulator-based evaluation results, are presented to demonstrate the effectiveness of our framework. View Full-Text
Keywords: smart environment; Internet-of-Things; Internet-of-Robotic-Things; cloud robotics; IoRT architecture; ambient intelligence; continual planning framework; dynamic environment smart environment; Internet-of-Things; Internet-of-Robotic-Things; cloud robotics; IoRT architecture; ambient intelligence; continual planning framework; dynamic environment
►▼ Show Figures 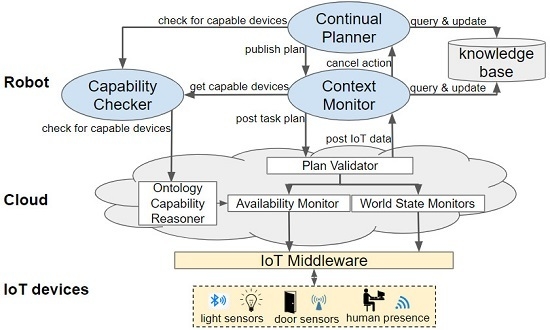