Many techniques have been developed for computer vision in the past years. Features extraction and matching are the basis of many high-level applications. In this paper, we propose a multi-level features extraction for discontinuous target tracking in remote sensing image monitoring. The features of the reference image are pre-extracted at different levels. The first-level features are used to roughly check the candidate targets and other levels are used for refined matching. With Gaussian weight function introduced, the support of matching features is accumulated to make a final decision. Adaptive neighborhood and principal component analysis are used to improve the description of the feature. Experimental results verify the efficiency and accuracy of the proposed method.
Keywords: feature; tracking; WMSNs; matching; weight; multi-level feature; tracking; WMSNs; matching; weight; multi-level

There are many techniques, such as photography, infrared scanning, correlation spectroscopy, lidar detection, and unmanned aerial vehicles, that can be used to achieve remote sensing monitoring [30,31]. Remote sensing cameras can be remotely monitored by installing them on a flying device or on a satellite to capture targets on the ground, vegetation, and plant emissions. The principle of remote sensing technology is that the reflection characteristics of electromagnetic waves are often not the same due to different objects or phenomena, and photographs of different colors or tones can be obtained by photosensitive recording of the photosensitive film. In some cases, the surveillance area can be deployed with a wireless distributed sensor network consisting of a set of multimedia sensor nodes, so-called wireless multimedia sensor networks. These nodes are connected or connected to the main gateways using a wireless communication protocol.
Suppose there are N sensor nodes deployed in a square surveillance zone that is divided into grids. The grid approach is commonly used to monitor the entire area without leaving gaps between the sensor nodes [32]. Each sensor node is fixed on a position , and there are several scalar sensors (such as seismic and acoustic) that are deployed around for detecting moving targets and awaken the camera sensor. As an object enters the grid area, it will be first detected by a scalar sensor. Then, the camera sensor will be awakened and try to take a short video or some images according to the position of alerting the scalar sensor. Figure 1 shows the topology and workflow of wireless multimedia sensor networks.
Our goal is to track a moving target using such sensor networks composed of camera sensor nodes and scalar sensors.
Different from traditional urban scenes, the computation ability and power support are limited. The cameras only work as they are awakened and very short videos or very few images can be captured for recognition and tracking. The multimedia data may be linked to several objects moving, and it means that the videos or images are not continuous in the spatial or time. It will be more difficult to recognize and track the target with such a discontinuous data. Figure 2 shows the difference between traditional scenes and limited scenes.
In the traditional scene, with the powerful support of energy and computation ability, enough long video and lots of image sequences can be easily collected for the latter computing. Many popular deep learning methods can be applied to complete the tasks. However, in a limited scene, there are only a few short videos and images available.

The research about disjoint cameras is started with Huang and Russell’s work on Bayesian formulation. They use the formulation to estimate the posterior of predicting the appearance of objects in one camera given evidence observed in other camera views. Multiple spatial-temporal features such as color, vehicle length, height and width, velocity, and time of observation are all included in the appearance model [33,34].
The term “person re-identification” is first proposed by Zajdel, Zivkovic, and Krose [35] in the research about multi-camera tracking.
They aim to recognize a person when it leaves the field of view and re-enters later. A dynamic Bayesian network is defined to encode the probabilistic relationship between the labels and features (color and spatial-temporal cues).
After then, many technologies are developed to address this problem such as independence of re-ID (image-based), video-based re-ID, deep learning for re-ID, end-to-end image-based re-ID, and so on [34,36,37].

Feature extraction is one of the most important techniques in computer vision and many high-level applications must be implemented on it [21,26]. Earlier approaches are started with the detection of corner points or distinct points [23]. Based on the local auto-correlation function, Harris proposed a combined corner and edge detector to cater for image regions containing texture and isolated features [22].
An important milestone of feature extraction is the presentation of scale-invariant feature transform (SIFT) [20]. This local image features is proposed to develop an object recognition system, and it is invariant to image scaling, translation, and rotation, and partially invariant to illumination changes and affine or 3D projection.
To reduce the 128-dimensional feature descriptor, principle component analysis is introduced to normalized gradient patch instead of using smoothed weighted histograms [26].
In addition, various methods and algorithms are then developed with different views to features [24,25,38]. Speeded Up Robust Features (SURF) is a novel interest point descriptor with scale-and rotation-invariance based on image convolution and Hessian matrix-based measure [27]. Some other methods are also presented by different principles such as geometric and photometric properties, dense correspondence, human visual system, dedicated sampling, and so on [29,39].

3.1. Optimal Selection to the Principle Components

By optimizing a closed-world toy model, Gheissari et al. [40] addresses person re-identification based on single-image. G is assumed to be a gallery composed of m images, denoted as . It means there are m different identities, . Given a probe image collected by WMSNs, its identity can be determined by where means the decision and means the similarity function. In general, the similarity can be computed based on the image features such as SIFT, SURF, etc.
Multi-level features points of each image in the reference gallery are pre-extracted based on the classical SIFT as shown in Figure 3—the first column shows the rough feature points and the second one shows refined feature points.
Assume that denotes the level features points of image . In this paper, means rough level and means refined level. Then, each local area centered a rough level point is reshaping to a row vector after necessary rotated normalization. All the vectors are arranged to a matrix denoted by and apply principle component analysis on it. The main advantages of using principal component analysis are that the method is performed without supervision, so there is no need to have any information about classes during size reduction. As a result, the method indicates the dominant patterns in the analyzed sets.
Let denote the reshaped row vector of the normalized local area centered . To well separate the multi-targets, a set of components to describe the feature points should be determined by
Here, V denotes the components’ matrix. The binary vector means selection to the components. Maximizing the objective function means to maximize the distance between two different targets.

A probe image can be checked by model (1) with a proper similarity threshold set. If passed, it will be further matching via refined features.
Scale-invariant feature transform (SIFT) is a common descriptor widely applied in many computer vision problems such as image matching, object recognition, and so on. Though some classical improvements have been approached in recent years, it still is one of the most representative techniques to well describe the image features. Based on the feature points computed previously, the traditional SIFT can be implemented as three main steps:

To make it work well in these limited WMSN scenes, we introduce adaptive neighborhoods to key-point checking and PCA to orientation assignment. This paper presents a novel frame for multi-targets tracking in limited WMSNs, and the feature extraction method can be directly replaced if necessary. For better performance of feature describing, some other techniques can also be introduced to these steps.

3.3. Evaluation of the Matching Results

Suppose that there are some feature points in the probe image q found to be matching the feature points in a reference image . The aggregation of and can be measured independently to make a binary decision on the target tracking.
It is natural to introduce the Gaussian weight function to measure the aggregation of in the reference image and regard it as similarity: where denotes a distance scale factor and means the distance from to their center.
However, the aggregation of in the probe image q is ignored and the above measurement can be improved as
Then, the similarity can be easily applied to make a binary decision on target tracking.
Though in a discontinuous tracking scene, it is still assumed that a few images could help to determine the moving area. Then, there is a probability of whether a feature belongs to the target. It is similar to a matching. Several intensive matching means more probability of target identification. Equation (5) is introduced to determine the identification based on the concentration of the matching.
For more accurate computing, some other techniques can be introduced to improve the similarity such as adaptive weight function, distance metric learning, and so on.

In this paper, a multi-level features extraction is presented for discontinuous target tracking in remote sensing image monitoring. The features of reference images are extracted at different levels in advance. The rough-level features are used to discard the error target and refined-levels are used to target matching. Proper neighborhood can be set adaptively and principal component analysis is used to improve the descriptor. The weighted support of matching features can be accumulated to make the final decision. Experimental results verify the efficiency and accuracy of the proposed method. 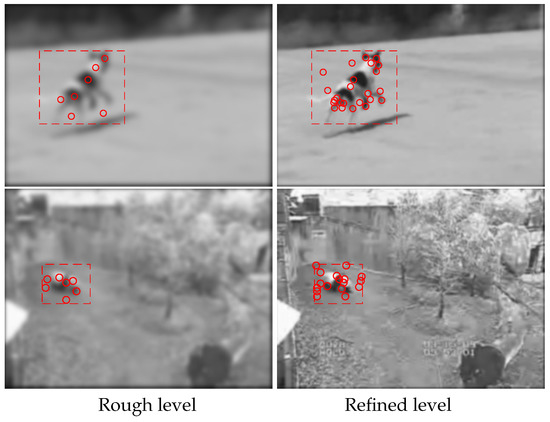 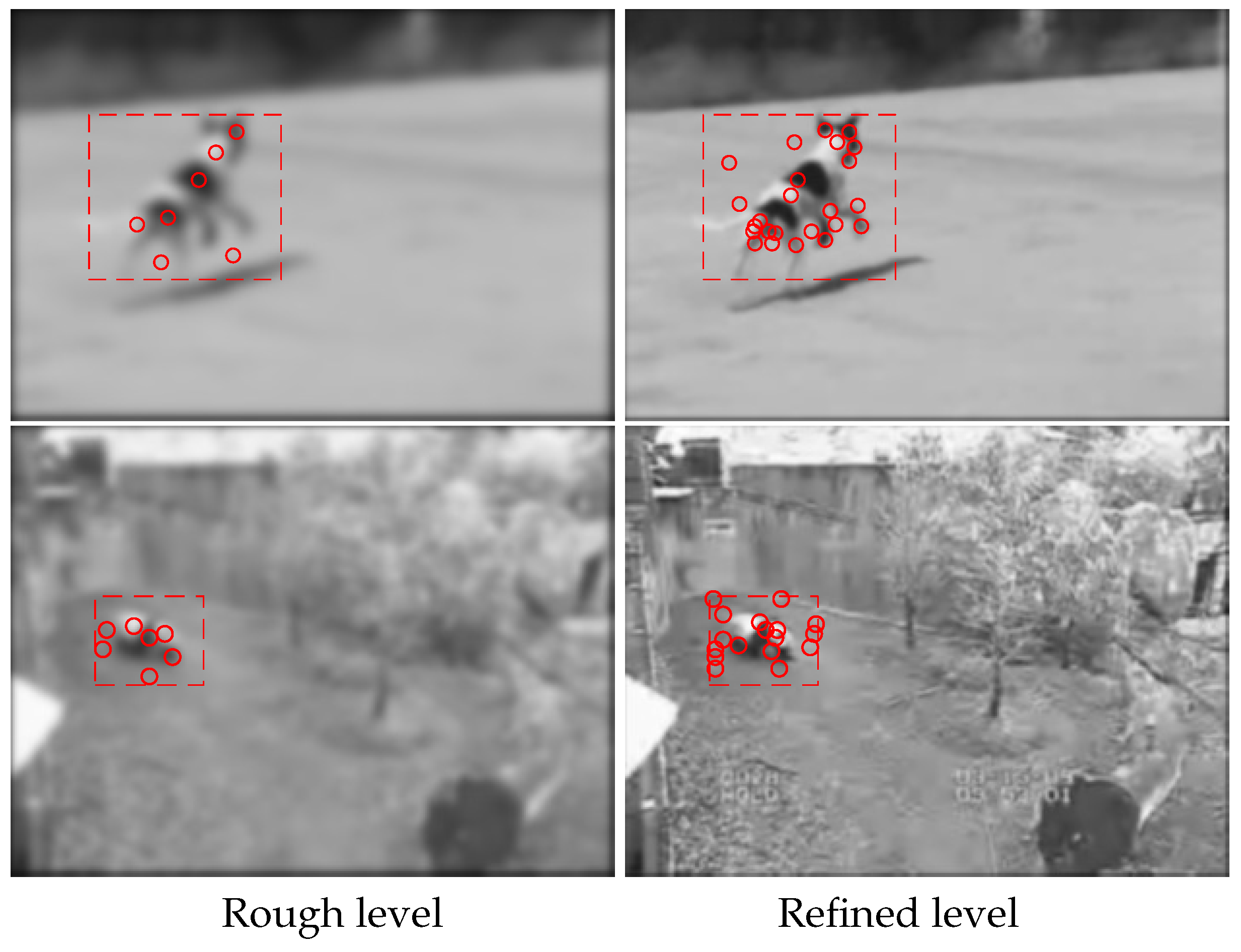 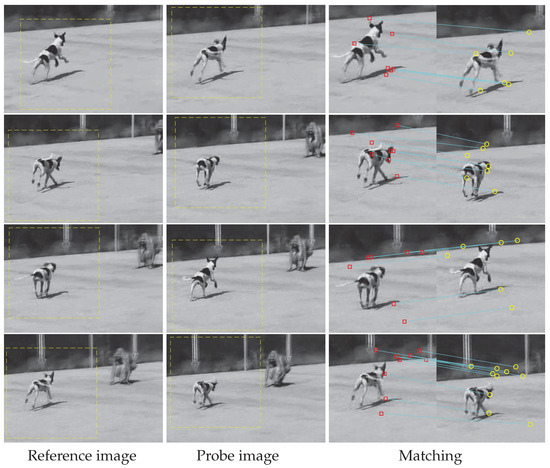 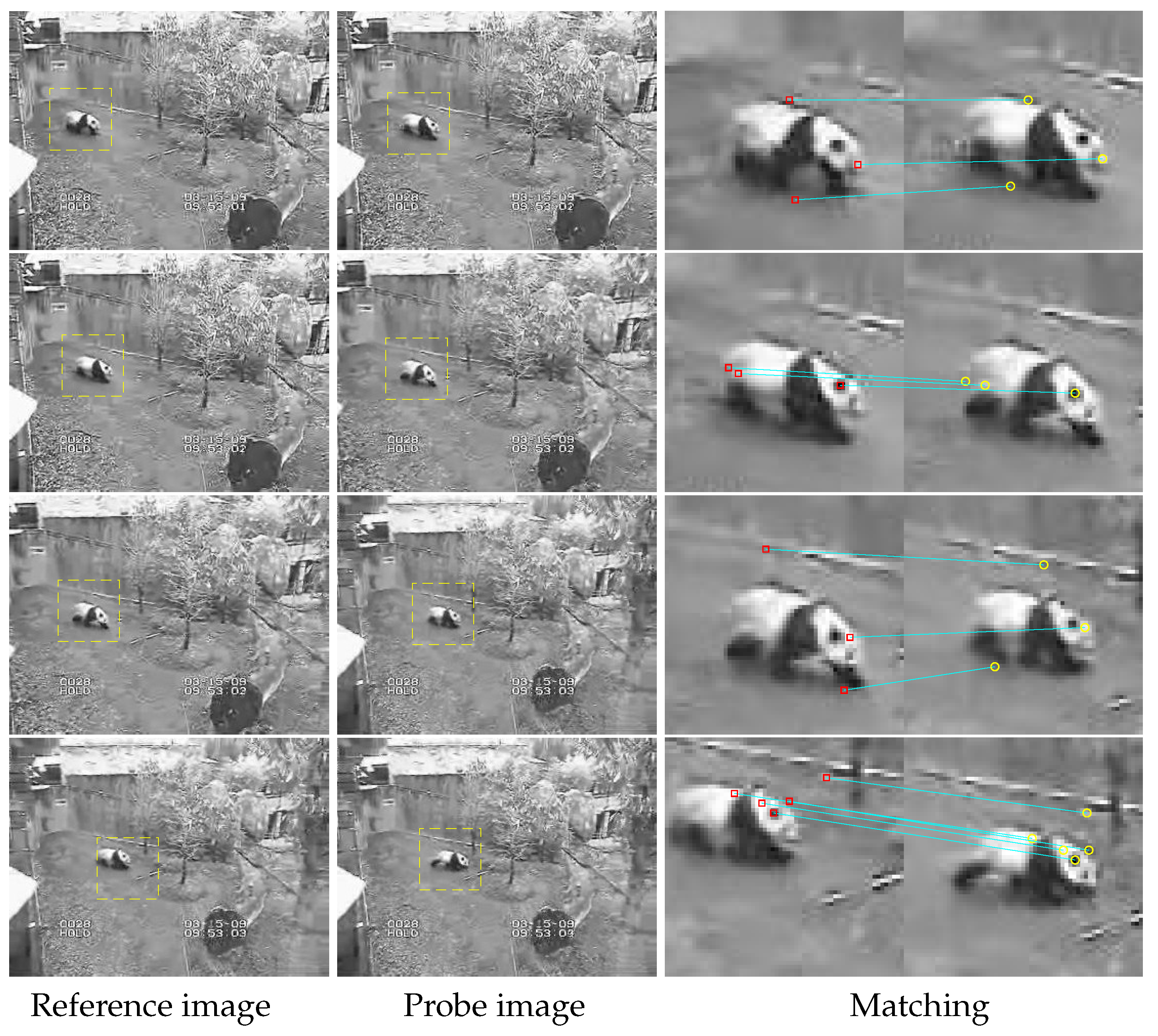 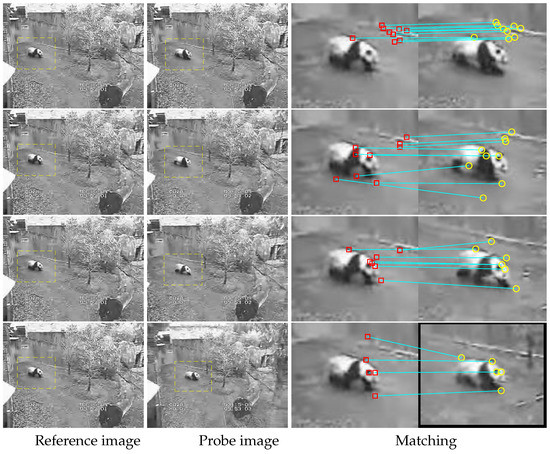 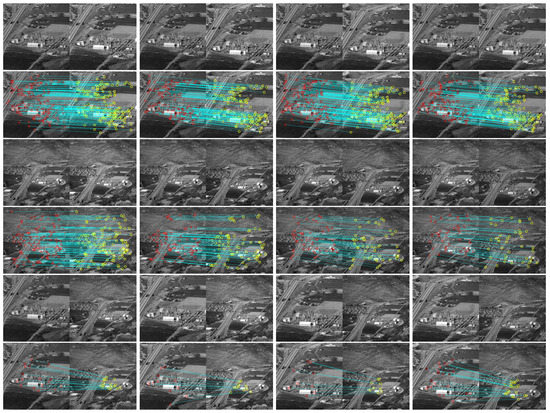