In this paper, we demonstrate the feasibility of realization of transparent gas sensors based on carbon nanotubes (CNTs). Both sensing layer and electrodes consist of CNTs deposited by spray deposition. The transparent sensor—with a transmittance higher than 60% in both sensing layer and electrodes—is characterized towards NH3 and CO2 and compared with a reference sensor with the same active layer but evaporated Au electrodes. In particular, the sensitivity towards NH3 is virtually identical for both reference and transparent sensors, whereas the transparent device exhibits higher sensitivity to CO2 than the reference electrode. The effect of the spacing among consecutive electrodes is also studied, demonstrating that a wider spacing in fully CNT based sensors results in a higher sensitivity because of the higher sensing resistance, whereas this effect was not observed in gold electrodes, as their resistance can be neglected with respect to the resistance of the CNT sensing layer. Overall, the transparent sensors show performance comparable—if not superior—to the traditionally realized ones, opening the way for seamlessly integrated sensors, which do not compromise on quality. View Full-Text
Keywords: ammonia; CO2; single-walled; spray deposition; transparent electrodes ammonia; CO2; single-walled; spray deposition; transparent electrodes
►▼ Show Figures 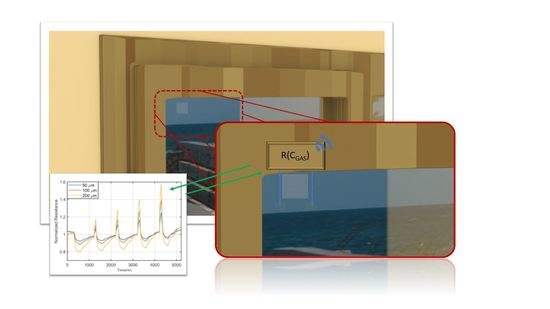