There is a growing desire for wearable sensors in health applications. Fibers are inherently flexible and as such can be used as the electrodes of flexible sensors. Fiber-based electrodes are an ideal format to allow incorporation into fabrics and clothing and for use in wearable devices. Electrically conducting fibers were produced from a dispersion of poly (3,4-ethylenedioxythiophene)-poly (styrenesulfonate) (PEDOT: PSS). Fibers were wet spun from two PEDOT: PSS sources, in three fiber diameters. The effect of three different chemical treatments on the fibers were investigated and compared. Short 5 min treatment times with dimethyl sulfoxide (DMSO) on 20 μm fibers produced from Clevios PH1000 were found to produce the best overall treatment. Up to a six-fold increase in electrical conductivity was achieved, reaching 800 S cm−1, with no loss of mechanical strength (150 MPa). With a pH-sensitive polyaniline coating, these fibers displayed a Nernstian response across a pH range of 3.0 to 7.0, which covers the physiologically critical pH range for skin. These results provide opportunities for future wearable, fiber-based sensors including real-time, on-body pH sensing to monitor skin disease.
Keywords: PEDOT: PSS; fiber electrode; wearable sensor; pH PEDOT: PSS; fiber electrode; wearable sensor; pH

Flexible and wearable electronics are being developed for use in a wide range of potential applications and is an active field of research [1,2,3,4]. True wearability requires such technologies to have fully flexible components, and fiber-based electrodes are an attractive option due to their electrically conductive and ductile nature. The fiber architecture allows for straightforward integration into textiles and garments making them comfortable to wear, with a “wear-and-forget” paradigm.
Electrically conducting fiber electrodes have been fabricated from carbons such as carbon nanotubes [5] and graphene [6] and conducting polymers such as polyaniline (Pani) [7], polypyrrole [8], and polyethylene dioxythiophene (PEDOT) [9]. Conducting polymers are particularly appealing for electronic textiles due to their intrinsic electrical and electrochemical properties such as high electrical conductivity, electrochemical switching, and charge storage [10,11,12,13]. The ease with which they can undergo solution processing allows continuous conductive fiber production using simple wet-spinning. Polyaniline (Pani) is interesting due to its variety of oxidation states that are pH dependent, making it suitable for pH sensing applications. Pani fibers have been produced by wet-spinning, yet are difficult to process due to its limited solubility [7]. Among conducting polymers, the highest electrical conductivity has been achieved with poly (3,4-ethylenedioxythiophene): Poly(4-styrenesulfonate) (PEDOT: PSS) after the removal of superfluous insulating PSS. Developed by Bayer in the late 1980s, PEDOT: PSS has good thermal and environmental stability and excellent processability from an aqueous dispersion, leading to its widespread use [14].
Studies have shown that solvent treatments for films of PEDOT: PSS have removed excess PSS and resulted in an increase in conductivity; however limited studies have been carried out using PEDOT: PSS fibers. Treatment with sulfuric acid has shown glass mounted PEDOT: PSS films to have a conductivity of over 3000 S cm−1 [15], while comparable treatments with formic acid displayed similarly high conductivities [16]. DMSO and methanol solvent treatment also greatly increased the conductivity of films [17,18]. Treatment of fibers with ethylene glycol showed a two-fold improvement in electrical conductivity in PEDOT: PSS fibers after one hour of immersion [19]. The modification of PEDOT: PSS to improve desirable properties is crucial to its use, due to the low electrical conductivity of water soluble PEDOT: PSS, typically in the order of 0.1–1.0 S cm−1 [19]. These improvements aid in increasing the performance and efficiency of devices. While PEDOT: PSS fibers have been produced [20] and used as strain sensors [21], limited examples exist describing their use in chemical sensing [22].
Achieving high electrical conductivities can allow PEDOT fibers to perform well as fiber electrodes. A highly conducting fiber is required for it to function as a base electrode during electrochemical deposition. The aim here was to investigate a broader range of solvent treatments on PSS fibers than has been carried out to date. The aim of these solvent treatments was to improve the fiber electrode properties, so that polyaniline could be electrodeposited onto these fibers for pH sensing applications. We have employed water soluble PEDOT: PSS pellets, and Clevios PH1000 PEDOT: PSS solutions to produce conducting PEDOT: PSS fibers. Treatment of these fibers after wet spinning was carried out via modification of the polymer using chemical treatments including sulfuric acid, formic acid, and dimethyl sulfoxide (DMSO). This allowed for excess insulating PSS to be removed, resulting in a vastly enhanced electrical conductivity at no expense to the mechanical properties. Subsequent electrochemical polymerisation of Pani onto PEDOT fiber electrodes allowed fiber-based pH sensing with a good Nernstian response.

Conducting polymer fibers can be produced by the readily scalable method of wet-spinning, which is capable of preparing kilometer-long conducting fibers. PEDOT: PSS fibers were produced by injecting 2.0 wt.% solutions of PEDOT: PSS into a coagulation bath consisting of acetone and iso-propanol (1:1 ratio). This system allowed meter-long quantities of fibers to be produced easily in a lab-scale set-up. Two commercially available sources of PEDOT: PSS were investigated including a solid pellet form (Orgacon) and a solution-based system (Clevios PH1000), with the latter yielding two different diameter fibers depending on the spinning injection rate.

Previous studies reported enhanced electrical conductivity of fibers following solvent treatment with ethylene glycol [19]. We extended the range of solvents to investigate the effect of sulfuric acid, formic acid, and dimethyl sulfoxide treatments on fiber properties, following reports that these solvents were effective at improving the electrical properties of PEDOT: PSS films [15,16,17]. The fibers were immersed into solutions of sulfuric acid, formic acid, and dimethyl sulfoxide for periods of 5, 60, and 120 min, followed by oven drying at 140 °C. Figure 1a describes the nomenclature used to name the fibers before and after solvent treatment. Initially, Orgacon PEDOT: PSS was used to study the effect of treatment time on fiber properties. No observable difference in diameter was observed following treatment with formic acid and DMSO, irrespective of treatment times, as shown in Figure 1d, and all fibers remained highly flexible, allowing them to be tied into knots. Alemu et al. reported a 5–10 nm change in film thickness following treatment with methanol as the solvent [18], which is difficult to see in fibers with micron-scale diameters such as ours. A 5 min treatment time with sulfuric acid increased the average diameter (although there is a 20% deviation within these measurements), which reduced again to those of untreated fibers for longer treatment times. This larger diameter is attributed to an increased water content of these fibers as observed during thermal gravimetric analysis (results not shown). We hypothesize that during the 5 min sulfuric acid treatment, sulfate ions enter the fiber (as observed during cyclic voltammetry), while PSS begins to diffuse out. The known strong hydrating effect of sulfate ions increases the water uptake in the fibers treated for 5 min, which leads to an increase in the diameter measured. Longer treatment times may allow the sulfate ion and PSS ion movement to reach an equilibrium and the fiber diameters are similar to those which have not been treated. SEM analysis of the cross-sectional area of untreated and treated fibers showed no apparent difference in morphology as a result of any of the treatments (Figure 1c–h). Optical microscopy determined the diameters of the Orgacon fibers to be in the range of 35 ± 10 µm.
Electrical conductivity measurements of untreated and treated Orgacon fibers are shown in Figure 2. A threefold improvement in electrical conductivity was observed after just 5 min of solvent treatment. Similar conductivity values were measured for all fiber treatment times with no further improvement observed for longer times (either 60 or 120 min), suggesting that all modification of the fibers occurred within the first 5 min. Xia et al. found that the conductivity increased after treatment with dilute sulfuric acid for up to three treatments [13]. For the solvents used here, the treatments were repeated with multiple immersions, showing no further increase after the first submersion. A tripling of electrical conductivity values was observed after treatment, with little difference observed between the three solvents used. The average conductivity values were slightly higher for H2SO4 and formic acid treatments, when compared to treatment with DMSO. This trend however was not observed with other PEDOT: PSS sources (as shown later in Figure 4). This is partially attributed to the removal of insulating PSS from the fiber, specifically from the fiber surface and the reordering of the polymer chains and is discussed later in the sections dealing with Raman spectroscopy and XPS [7,13,15].
Similar mechanical properties were measured for all fiber treatment times, again suggesting that all modification of the fibers occurred within the first 5 min. Figure 2 shows the typical ultimate tensile strength values of both untreated and solvent treated Orgacon PEDOT: PSS fibers. Sulfuric acid treatments were found to significantly weaken the fibers leading to breaking strength values of less than half their untreated counterparts. There is no statistical difference in the breaking strengths of PEDOT: PSS fibers after treatment with formic acid and DMSO relative to untreated Orgacon fibers. The use of non-volatile DMSO as the treatment solvent followed by oven heating permits molecular re-orientation of the polymer chains into a stiffer fiber with a higher Young’s modulus compared to non-treated fibers, 2.0 GPa and 1.3 GPa, respectively (data not shown). DMSO and formic acid treatment improved the electrical/electrochemical properties of Orgacon PEDOT: PSS fibers at no detriment to their physical properties.

Three variants of PEDOT: PSS fibers were each treated with sulfuric acid, formic acid, and DMSO. Analysis of the consequence of these treatments on PEDOT: PSS fibers has shown the treatments to be effective in modifying many of the properties of the fibers after 5 min, with no further improvement being noted with longer treatment times. An increase in electrical conductivity was observed for formic acid and DMSO treatments without significantly changing the breaking strength of the fibers, while sulfuric acid showed an increase in electrical conductivity at the expense of tensile strength. The increase in electrical conductivity is due to a reduction of the insulating PSS within the fibers as shown by Raman spectroscopy and XPS measurements. The fiber most suited for use in electrochemical devices was produced from Clevios PH1000 with a 20 µm diameter, and treated with DMSO. These fibers possess an optimal balance of electrical conductivity and mechanical strength. Pani deposition onto this DMSO-treated 20 µm fiber resulted in a fiber-based pH sensor with a Nernstian response of −56 ± 7 mV pH−1. These fibers are promising potentiometric sensors for wearable applications.

The authors would like to acknowledge and thank Steven Hinder for technical support with XPS measurements. 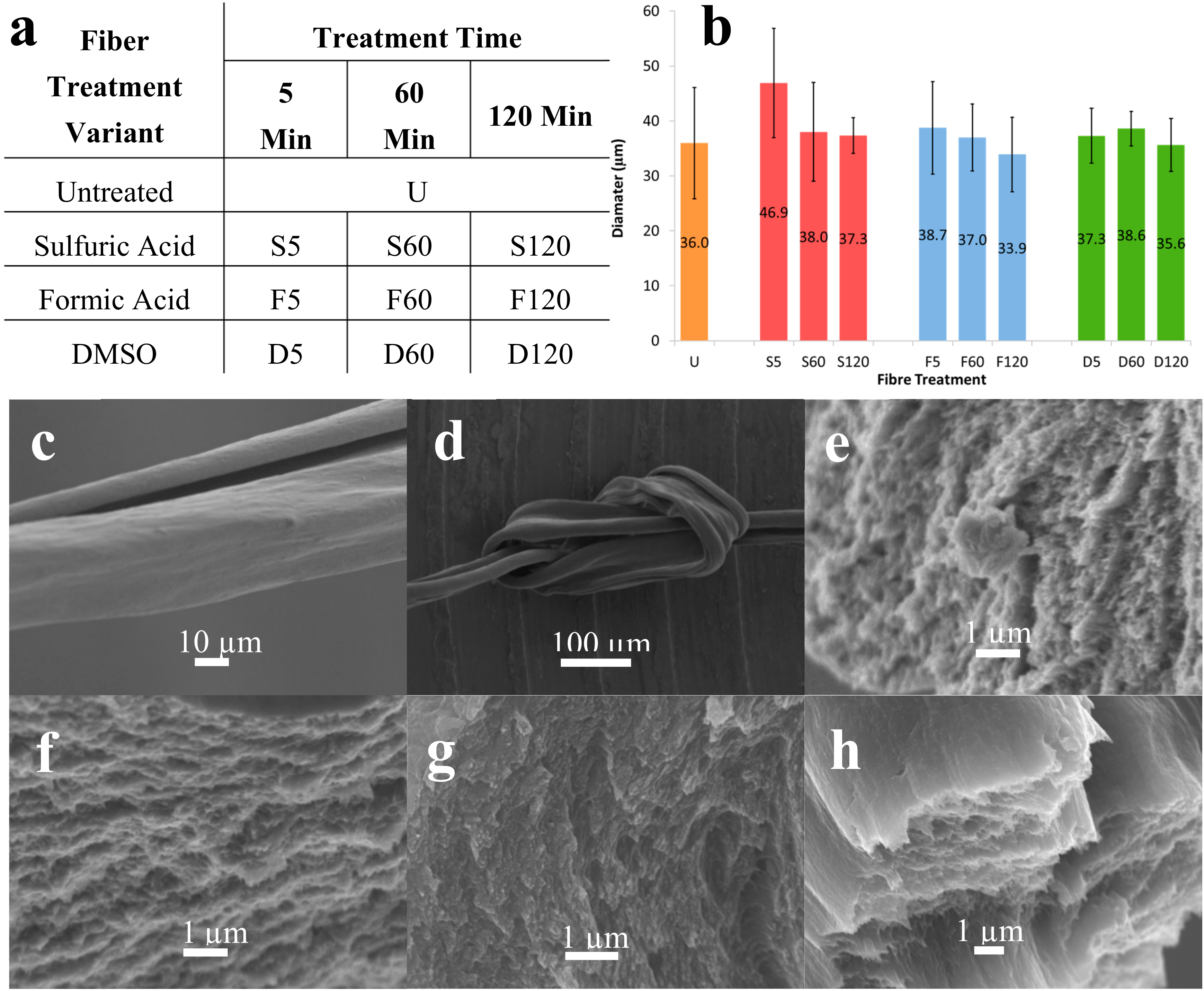