Soft tactile sensors have been applied to robotic grippers for assembly. It is a challenging task to obtain contact information and object orientation using tactile sensors during grasping. Currently, the design of Hall-effect-based tactile sensors to perform such tasks is based on trial and error. We present a method of investigating the optimal geometrical design of a cylindrical soft sensor to increase its sensitivity. The finite element model of a soft fingertip was constructed in Abaqus with two design variables, i.e., hollow radius and magnet position. Then, the model was imported into Isight, with the maximisation of magnet displacement as the objective function. We found that the optimal design was at the boundary of the parameter design space. Four fingertips were fabricated with one intuitive, one optimal, and two optional sets of parameters. Experiments were performed, and object orientation was estimated by utilising linear approximation and a machine learning approach. Good agreements were achieved between optimisation and experiments. The results revealed that the estimated average error in object orientation was decreased by the optimised fingertip design. Furthermore, the 3-axis forces could successfully be estimated based on sensor outputs. View Full-Text
Keywords: force sensing; soft robotics; tactile sensor; optimisation force sensing; soft robotics; tactile sensor; optimisation
►▼ Show Figures 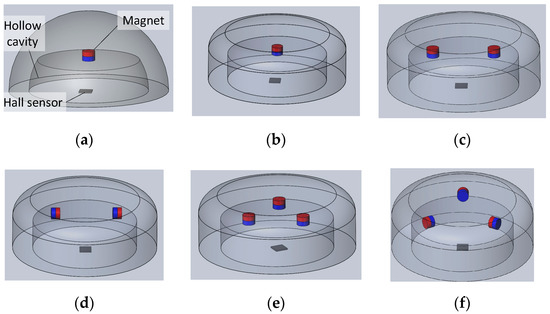