Microwave staring correlated imaging (MSCI), with the technical capability of high-resolution imaging on relatively stationary targets, is a promising approach for remote sensing. For the purpose of continuous observation of a fixed key area, a tethered floating aerostat is often used as the carrying platform for MSCI radar system; however, its non-cooperative random motion of the platform caused by winds and its unbalance will result in blurred imaging, and even in imaging failure. This paper presents a method that takes into account the instabilities of the platform, combined with an adaptive variable suspension (AVS) and a position and orientation system (POS), which can automatically control the antenna beam orientation to the target area and measure dynamically the position and attitude of the stochastic radiation radar array, respectively. By analyzing the motion feature of aerostat platform, the motion model of the radar array is established, then its real-time position vector and attitude angles of each antenna can be represented; meanwhile the selection matrix of beam coverage is introduced to indicate the dynamic illumination of the radar antenna beam in the overall imaging area. Due to the low-speed discrete POS data, a curve-fitting algorithm can be used to estimate its accurate position vector and attitude of each antenna at each high-speed sampling time during the imaging period. Finally, the MSCI model based on the unsteady aerostat platform is set up. In the simulations, the proposed scheme is validated such that under the influence of different unstable platform movements, a better imaging performance can be achieved compared with the conventional MSCI method. View Full-Text
Keywords: microwave staring correlated imaging; unsteady aerostat platform; motion parameter fitting; position error microwave staring correlated imaging; unsteady aerostat platform; motion parameter fitting; position error
►▼ Show Figures 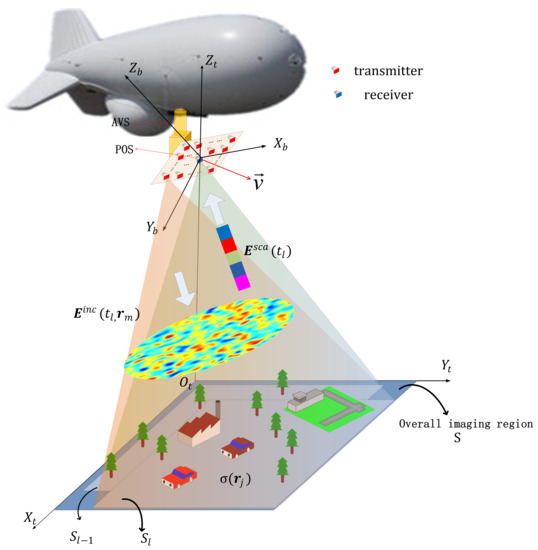