The image resolution is the most important performance parameter for an aerial optoelectronic sensor. Existing thermal control methods cannot eliminate the sensor’s temperature gradient, making the image resolution difficult to further improve. This article analyzes the different impacts of temperature changes on the imaging resolution and proposes modifications. Firstly, the sensor was subjected to thermo-optical simulation by means of finite element analysis, and the different impacts of temperature changes on the imaging quality were analyzed. According to the simulation results, an active thermal control method is suggested to enhance the temperature uniformity of the sensor. Considering the impacts of active and passive thermal control measures, thermal optical analysis was carried out to predict the performance of the sensor. The results of the analysis show that the imaging quality of the sensor has been significantly improved. The experimental results show that the image resolution of the optoelectronic sensor improved from 47 to 59 lp/mm, which demonstrates that the sensor can produce a high image quality in a low-temperature environment.
Keywords: remote sensor; image analysis; temperature; thermal effects remote sensor; image analysis; temperature; thermal effects

As an important means of information acquisition, aerial optoelectronic sensing technology has the advantages of flexibility and real-time performance. It is widely used in fields such as geographic mapping, national defense security, and film and television aerial photography [1,2]. The imaging resolution determines the ability to distinguish distant objects, which is the most important performance parameter for an aerial optoelectronic sensor. Such a sensor needs to detect, recognize, and positively identify targets with pinpoint precision in, for example, emergency rescues and forest fire prevention. In aerial photography, it is necessary to clearly distinguish scenes on the ground. The higher the resolution, the smaller a target can be, and still be able to be successfully identified. There is a direct correlation between the imaging quality and the temperature uniformity of the aerial optoelectronic sensors [3,4,5]. However, existing thermal control methods cannot eliminate the sensor’s temperature gradient, making the image resolution difficult to further improve. Due to the complexity of the aerial environment, the temperature of the sensors changes greatly during the execution of the mission, thus causing serious damage to the imaging resolution. In order to ensure that the imaging device outputs a clear image, thermal control measures must be taken to compensate for the temperature of the optics.
In order to obtain high-resolution images, the thermal control technique has been widely used in spaceborne remote sensors for the past few years. This technology is already widely used in space engineering [6,7,8,9]. The present thermal control research on aerial optoelectronic sensors usually adopts experience acquired in space engineering. Fan, from China, built a finite element model of an aerial sensor, and the heat loss rate was analyzed based on the working atmosphere [10]. A study on the thermal design of a transmission optical remote sensor was conducted by Li [11]. However, the aerial environment was more complex than that in space. There is an intense convective heat transfer between an atmosphere and a sensor in an aerial environment, which makes the sensor’s temperature change greatly. Due to different external thermal conditions, the aerial thermal control technique has its own unique characteristics [12].
Rapid changes in temperature from the ground to the upper air can cause complex heat exchange through conduction, convection, and radiation [13]. As a result, not only are the size and optical properties of the optical components changed, but the refractive index of the glass material is as well, causing the optical system to defocus and thus produce additional aberrations that severely affect the imaging resolution of the optical system [14,15]. Therefore, the use of thermal control technology to stabilize the temperature level of high-altitude optical remote sensors and eliminate the influence of temperature gradients on imaging quality is key in the development of aerial optoelectronic sensors. This article discusses the phenomena found in thermal experiments, proposes modifications for the thermal control system, and demonstrates the importance of temperature uniformity. The impact of temperature changes on the imaging resolution was analyzed, and the improved thermal control measures were found to meet the requirements of the aerial cameras.

The aerial optoelectronic sensor is a visible light camera that adopts a Cassegrain optical system. The focal length of the camera is 1200 mm, which is easily affected by thermal conditions. In order to distinguish a target 20 km away, a sensor’s image resolution must be more than 55 lp/mm. The objective of a thermal control method is to ensure that the camera’s resolution at −30 °C is higher than 55 lp/mm. The camera works in a high-altitude aerial environment, so an external cold environment will significantly affect the temperature distribution of the camera’s internal optical system. A passive thermal control design was carried out based on the thermal conditions and structural characteristics of the camera. Passive thermal control measures, such as thermal isolation, were used to extend the thermal time constant of the system and reduce the sensitivity of the optical system to the external thermal environment.
In order to reduce the thermal deformation in the optical system, SiC and 4J32 were selected as the material of the mirrors and the supporting structure, respectively, for their similar linear expansion coefficient. The lens could adopt materials such as NBK and NSF with a low linear expansion coefficient, NBK and NSF are common materials used in the field of engineering optics, and the lens barrel material was TC4, which can significantly reduce the thermal stress between the optical component and the mechanical component. The surface of the mechanical components was black, anodized to facilitate a uniform temperature throughout the assembly, and the inner surface of the spherical shell was entirely covered with insulation layers. As shown in Figure 1, the temperature sensors were attached to the primary mirror, the secondary mirror, and the lens barrels.
Taking pictures of the identification plate is important for testing the sensor resolution in the lab. The identification plate was comprised of black and white stripes, where the width of each stripe was between 10 μm and 40 μm. The sensor’s visual resolution was calculated by identifying the minimum width of the stripe. According to Figure 2, the thermal experimental device mainly comprised a target generator, a collimator, a simulation chamber, and a camera. The test steps were as follows: The initial temperature of the camera was set to 20 °C. The camera was then put into a −30 °C simulation chamber, in which the camera imaged the target projected by the outer collimator. The camera cooled due to the influence of the ambient temperature. Table 1 shows the measured temperature after 1 h. It can be seen that the temperature obviously declined, and the optical system produced an axial temperature gradient. The temperature of the secondary mirror is the lowest, as it is closer to the window, which will generate a relatively strong radiation heat exchange with the external environment.
It was found that a low temperature environment could degrade the imaging resolution of the camera. The two images in Figure 3 were taken by the camera at different temperatures for the same target. Figure 3a is an image obtained at 20 °C. The smallest resolvable stripe is the ninth group with a resolution of 66 lp/mm. The image in Figure 3b was taken after 1 h, and the minimum resolvable stripe is the third group, with a resolution of 47 lp/mm. The experimental results show that the imaging resolution under the existing passive thermal control does not meet the requirement, which indicates that the existing passive thermal control measures should be modified and redesigned.

3. Analysis of the Thermal Imaging Test

In the low-temperature environment, the imaging quality of the optoelectronic sensor descended significantly. This phenomenon was caused by the uneven temperature of the optical system.

3.2. Optical Analysis of the Sensor Based on the Present Control Measures

4.2. Optical Analysis of the Sensor Based on the Modified Control Measures

The boundary conditions were reset based on the improved thermal control method, while the finite element model was the same as that described in Section 3.2. The thermal analysis results show that the overall temperature level of the camera was significantly improved, and the temperature difference between the primary and secondary mirrors was also significantly reduced. After the thermal optical analysis, the first three orders of aberrations of the system were obtained, as shown in Table 4. With the help of the active thermal control, the spherical aberration of the optical system was improved, and the coma was more obviously reduced. The finite element analysis results show that the combination of active thermal control and passive thermal control can achieve satisfactory thermal control results.

The authors are thankful for the support from the Key Laboratory of Airborne Optical Imaging and Measurement, Changchun Institute of Optics, Fine Mechanics and Physics, Chinese Academy of Sciences. 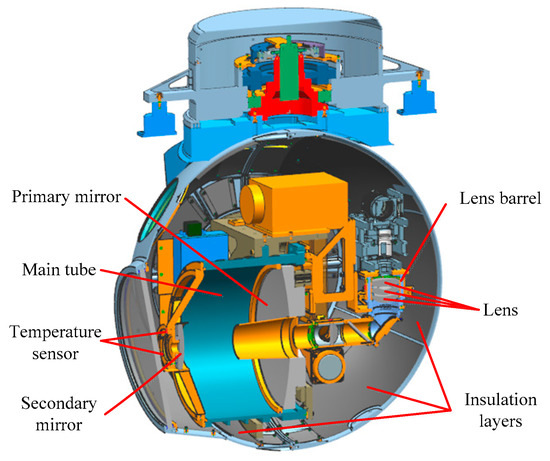 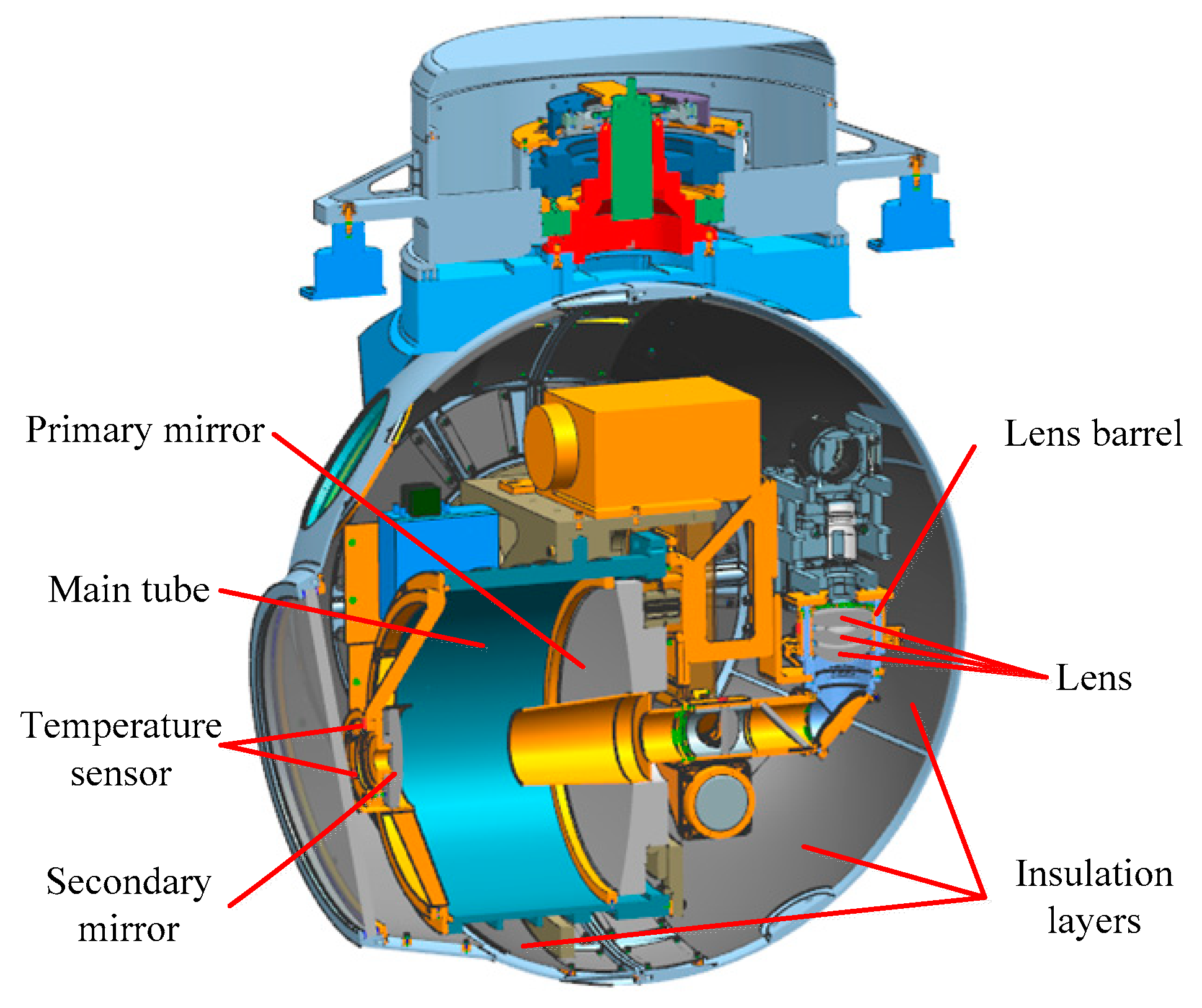 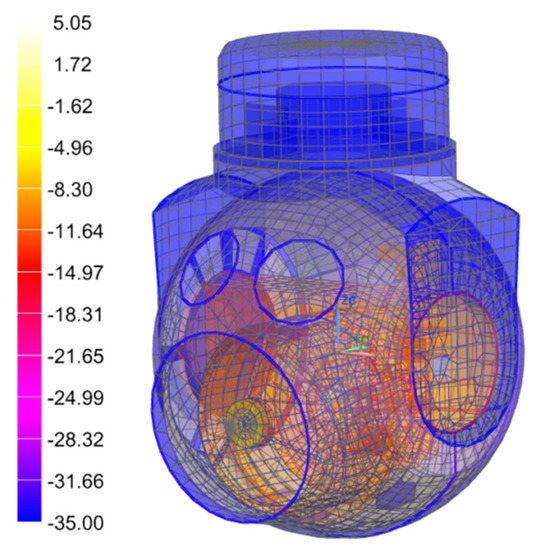 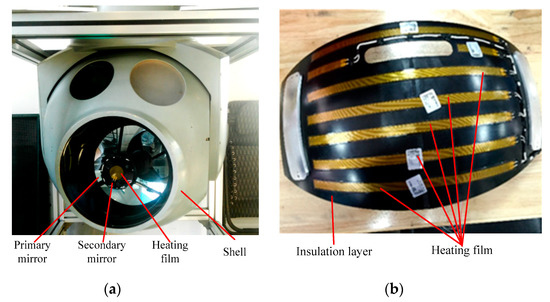 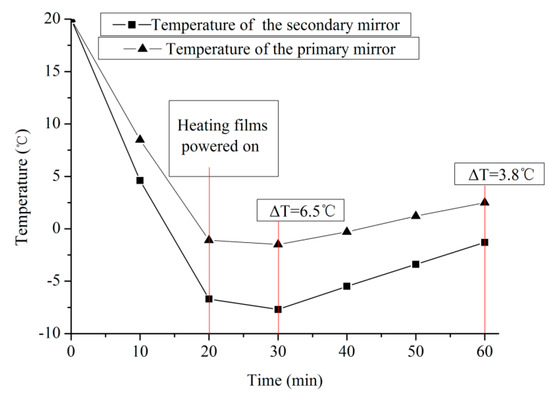 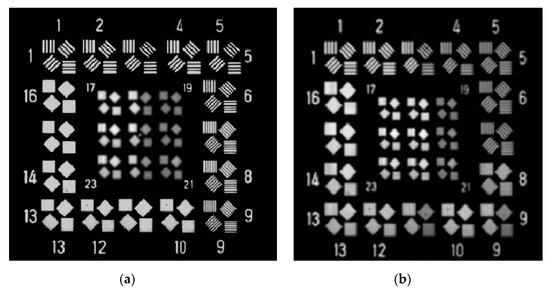