Due to their high sensitivity, biocompatibility and detection accuracy, biochemical sensors based on the surface plasmon resonance technique have been investigated and applied in numerous chemical and biological applications [1], for instance, medical diagnostics, enzyme detection, and pharmaceutics [2,3,4]. The SPR phenomenon refers to the resonance excitation of the surface plasmon polaritons (SPPs) at the interface of negative (metal) and positive (dielectric) constant materials [5], which is suitable for label-free sensing and the real-time monitoring [6].
One of the best ways for making sensing devices is to choose a large surface area binding/adsorbing material, like the popular 2D material graphene. Transition metal dichalcogenide (TMDC) materials, which have excellent properties such as an absorption rate (~5%) which is higher than that of monolayer graphene (2.3%), a large tunable band gap which is quite different from the zero band gap of graphene, and large work functions as compared with those of graphene, are becoming the preferred materials among the biosensing research fraternity. The fantastic optical, electrical, chemical properties of TMDCs make them promising candidates and successful materials compared to graphene for the next generation of optic and electronic devices [7,8,9]. TMDC-based SPR sensors which exhibit enhanced sensitivity have been proposed for refractive index sensing [10,11].
Single layer SnSe also possesses fantastic electrical and optical properties and generates high interest as a 2D material beyond the predecessor members, which displays the same structure as graphene and phosphorene [12,13]. As a classical p-type IV–VI semiconductor, SnSe has a narrow gap (~1.30 eV direct and ~0.90 eV indirect), and additionally, it also shows less toxicity, and better chemical stability. It is well known that SnSe has a layered crystal structure similar to those of other IV–VII binary semiconductors, such as SnS, GeS and GeSe, etc. In experiments, the assumption that unilaminar crystal SnSe would display different thermoelectric properties on different axes was authenticated by Zhao et al. [14], who manufactured hole-doped single crystal SnSe [15]. A lot of SnSe allotropes have been investigated by density functional theory [16]. Monolayer SnSe not only has outstanding thermoelectric features with semiconductor properties, but is also an eminent optoelectronic material, but there are few systematic studies on the optic and electric characteristics of SnSe allotropes.
As we know, Au is not susceptible to oxidation and does not react with most chemicals, and hence it is often used as the metal film in sensors. In practical applications, Au films can be replaced by other metals like Ag, which has been found to have higher sensitivity than Au in biosensor applications. However, Ag has poor resistance to oxidation in many environments. In order to protect Ag from oxidation and increase biomolecule adsorption, we introduce SnSe. Additionally, SnSe can also be used as the protective layer adjoined the biomolecular recognition elements to prevent oxidation, increasing the biomolecule adsorption. Therefore, we can use an Ag-SnSe structure to replace the Au film in sensors to obtain new biosensors. In this paper, we have introduced the 2D material SnSe to a type of SPR biochemical sensors to improve their sensitivity and maintain their chemical stability. A Kretschmann attenuated total reflection (ATR) configuration was chosen as these SPR sensor structure. In this structure, a thin metallic silver (Ag) layer was covered on the basis of the optical coupling prism, BK7 glass was used as coupling prism and the Ag layer was separately covered with three types of SnSe allotrope [17,18].

The structure of the proposed high sensitivity sensor separately containing three types of SnSe allotropes is shown in Figure 1. The thickness of the SnSe monolayer is 0.575 nm [19]. BK7 glass is used as coupling prism; silver film used as the first-rank metal for SPP is selected from 48 nm to 52 nm. The BK7 glass refractive index is calculated from Equation (1) [20]:
The refractive index of silver (Ag) can be expressed by the Drude-Lorentz model [21]: where λc and λp are the collision and plasma wavelengths, and the numerical values of λc and λp for Ag are 1.7614 × 10−5 m and 1.4541 × 10−7 m, respectively. SnSe is covered on the Ag metal film surface to impede the metal from being oxidized, which farther increases the sensibility of the designed biochemical sensor.
The refractive indices, as variable quantities of the three SnSe allotropes and composed of a real part and an imaginary part are obtained from the experimental data of Cui et al. [22]. Figure 2 shows the refractive index of these three SnSe allotropes at wavelengths from 590 nm to 650 nm, where inside the full curves are the real parts (n) and the dotted lines are the imaginary part (k) of the SnSe allotropes. At λ = 633 nm, the refractive indexes of the three SnSe allotropes are 8.59 + 4.03i, 9.94 + 9.2i, and 4.4 + 3.53i, respectively.
The expression ns = 1.33 + Δn is the refractive index in the sensitive medium, and Δn is the change of refractive index in the sensitive medium causing by chemical reactions or biological actions.
We have employed the transfer matrix method [23] to evaluate the reflectivity of the incident TM-polarized light of the N-layer model, because the matrix method is pinpoint and without approximations. In these SnSe allotrope biosensors, all layers are piled in the direction of the vertical BK7 glass coupling prism, and each layer is represented by a dielectric constant (εk), refractive index (nk), and thickness (dk), respectively. The resonance angle is defined of the minimum reflectance corresponding to the incident angle. The tangential field of the first boundary Z = Z1 = 0 is correlated with the tangential field of the final boundary Z = ZN−1: where V and U delegates the ingredients of magnetic and electric fields at the limiting surface. M is the characteristic matrix of the composite architecture, and k is the k-th layer in the N-layered model, and for p-polarized light it is made up of:
After some straightforward mathematical steps, we can obtain the p-polarized light N-layer complex reflection coefficient rp, and the corresponding amplitude reflection coefficient (Rp) can be obtained by the square of rp:
The transformation of sensing medium in refractive index (Δn) can initiate the change of resonance angle (Δθ), and the sensitivity can be indicated as SR1 = Δθ/Δn [24].

X.D. conceived the research concept and wrote the manuscript; Y.L., Y.Z. and S.G. performed the data processing and analysis; Y.J., and Y.X. supported and supervised the development of the work. All authors contributed to the data interpretation and manuscript evaluation. 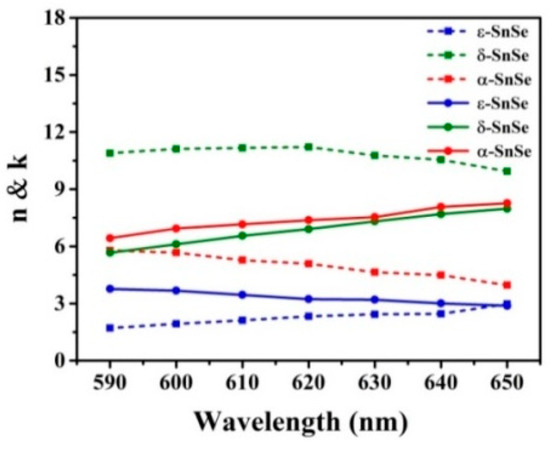 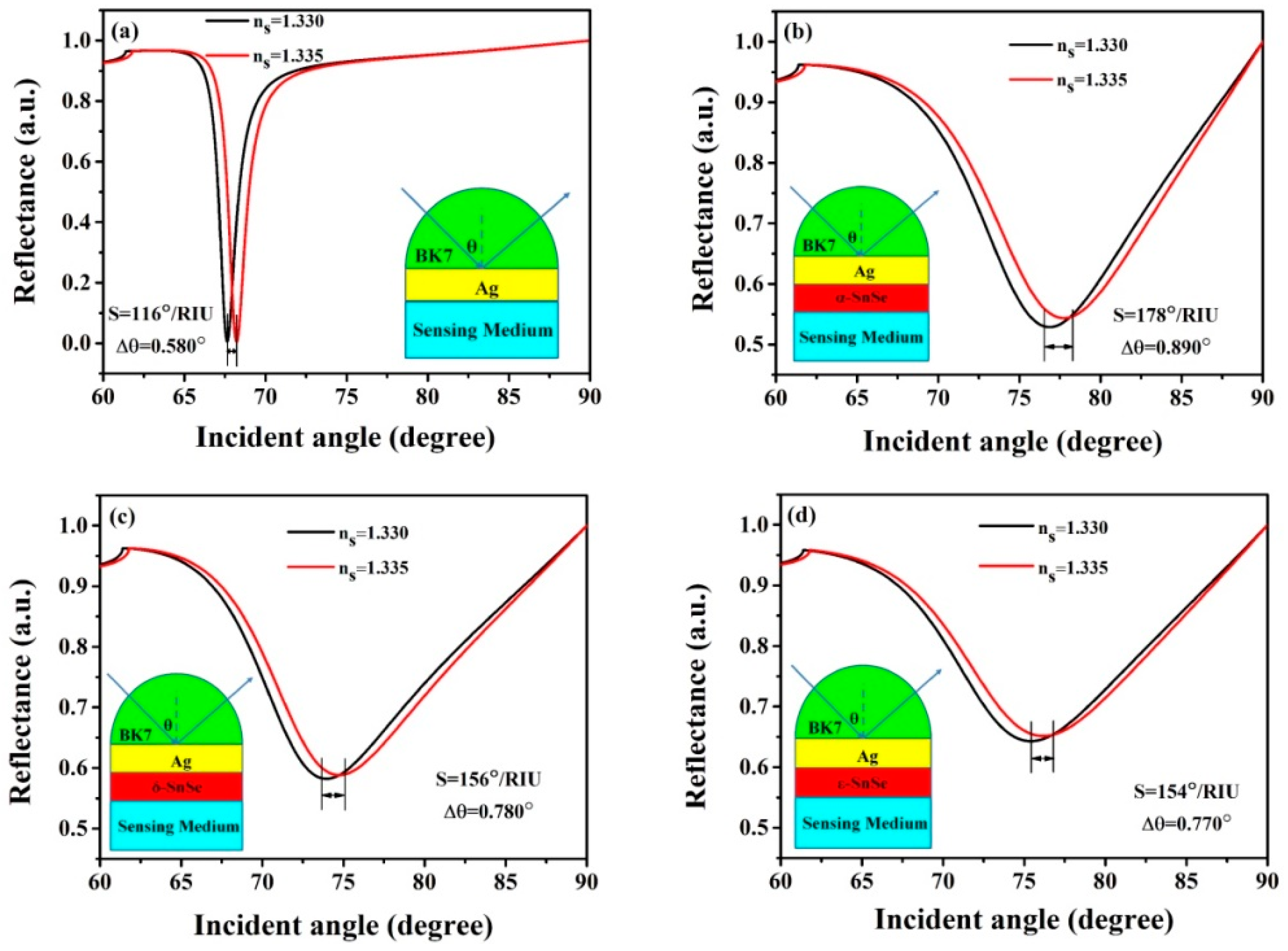 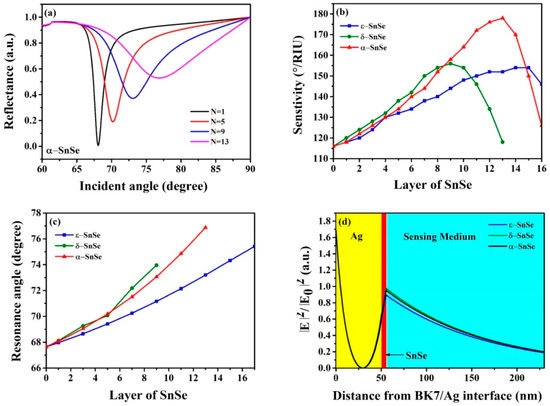