A design method of large-sized square-loop and circular-loop frequency selective surface (FSS) filters for protection of mm-wave imagining receivers is presented. Due to fine cell structure requirements, the performance of the FSS structures at mm-wave frequencies can be significantly affected by fabrication tolerances, especially involved with large-size panel fabrication. Through a comprehensive parametric variation study on the performance of square-loop and circular-loop FSS structures, it is found that the circular-loop FSS structure performs much less sensitively to the fabrication tolerances, thereby producing better and consistent performances with given design values. As a design example, square-loop and circular-loop notch filters resonating at 105 GHz were designed and the performances were evaluated with multiple prototypes. The resonant frequencies of the implemented circular-loop FSS filters deviated by only about 0.5 GHz from the accurate designed value, which can be easily adjusted in the design process. The implemented square-loop and circular loop FSS filters provided low-loss in the pass-band and high rejection of 23 dB at the resonant frequency with good oblique angle performance.
Keywords: frequency selective surface (FSS); millimeter-wave; imaging diagnostics systems; large-size FSS frequency selective surface (FSS); millimeter-wave; imaging diagnostics systems; large-size FSS

A frequency selective surface (FSS) consists of an array of identical metallic structures arranged as a single or multi-dimensional periodic surface. The periodic structures have extensively been used in series of microwave, millimeter-wave (mm-wave) and terahertz (THz) applications such as band-stop filters, dichroic reflectors and circuit absorbers [1]. When excited by an incident plane wave, the FSS resonates at a particular frequency or multiple frequencies depending on the properties of the periodic array structure, dimensions and dielectric substrate. The conventional FSSs are interpreted as capacitive or inductive structures or sometimes a combination of both [2,3,4,5,6].
A plethora of FSS configurations have been actively investigated in wide application areas such as reflectors for satellite communications [7,8], microwave radomes [9], waveguide filters [10], phase shifting surfaces [11], linear to circular polarization convertors [12,13] and various antennas [14]. In addition, the FSS has been used as metamaterials and metasurfaces in the mm-wave and THz technology for designing absorbers, sensors, spatial filters and imaging system components [15,16,17,18,19,20,21]. The FSS structures used in these studies include square structure, circular structure and the combination of square or circular with other structures.
Recently, the FSSs were implemented as notch, band-stop and high-pass filters for mm-wave imaging diagnostic systems [22,23,24,25,26]. In the studies, the resonant frequencies of the FSS-based filters were 105 GHz, 110 GHz, 140 GHz and 170 GHz for imaging diagnostic systems for tokamak plasmas [6,24]. In these systems, the FSS-based protection was essential to protect the receiver electronics from unwanted stray signals by providing high rejection of, often, powerful unwanted signals. For example, in the ECEI (electron cyclotron emission imaging) system, which extracts images of plasma temperature fluctuations in tokamak plasmas by detecting weak plasma radiated signals in mm-wave band, protecting Schottky diode detector arrays from high-power stray ECRH (electron cyclotron resonance heating) signals was required. A large-sized thin planar FSS filter was required to be placed in front of the detector array box to reject or weaken the powerful stray signal [26].
For mm-wave applications, the performance of the reported mm-wave FSS structures was highly dependent on the fabrication accuracy due to the fine cell structure requirements. Therefore, for the implementation, high-precision and expensive fabrication techniques such as Electro-Fine Forming (EF2) technology [23], thin-film technology [27] and microfabrication [28] were used to fabricate FSS filters. With small-sized FSS structures [27,28,29], high-precision fabrication technique can be applied without difficulty, but, as the size of the FSS panel becomes bigger, significant increase in fabrication cost can occur. In this regard, recently, our group has developed and reported a low-cost fabrication technique for large-size FSSs (~19.7 × 6.3 inches at 170 GHz) with high performance at mm-wave range to protect the mm-wave ECEI receiver [6]. In the study, an array of square loops on both sides of the substrate was used, but, with using the commercial PCB process, the resonant frequencies of the FSSs from multiple prototypes showed variations of around 3 GHz deviated from the designed values.
In this paper, a comprehensive comparative parametric analysis including the effect of fabrication tolerances on the performance for square- and circular-loop FSS structures at the millimeter-wave frequency range is presented. It is shown that an array of circular loops is found to produce more predictable and accurate results as compared with the array of square loops under the same fabrication tolerance conditions. To the best of authors’ knowledge, the configurations of circular-loop FSSs have not been yet employed previously in the mm-wave imaging systems.

With the proposed design of square-loop and circular-loop FSSs, periodic structures are comprised of an array of square loops and circular loops printed on both top and bottom sides of the supporting substrate. Figure 1a shows the layout of the square-loop FSS and the structure of the circular-loop FSS is shown in Figure 1b. The Roger 4003 substrate with loss tangent of 0.0027 and relative permittivity of 3.38 is used for the design of the proposed FSSs. The thickness of the dielectric substrate and metal thickness are chosen as 12 mil and 0.7 mil, respectively. Top and bottom sides of square-loop and circular-loop structures are symmetric as shown in Figure 1a,b.
The FSS is interpreted as capacitive or inductive structures or sometimes a combination of both. Therefore, the FSS can be modelled as an equivalent circuit of L-C networks. For both square-loop and circular-loop array structures, the equivalent circuit model (ECM) can be identical and is shown in Figure 1c. The ECM is a combination of two series L-C networks and mutual coupling components for the top and bottom sides of the substrate. The substrate is modelled as a short transmission line, which has a thickness h. When a perpendicularly polarized plane wave is impinged at the FSS, the capacitance is formed between gaps of the adjacent loops of the conducting material due to electric charge accumulation and the inductance occurs due to a flow of current around the adjacent loops. These electric charge densities are accumulated at the horizontal (x-direction) strips of the loops, creating the capacitive part “C.” Whereas, the magnetic field is induced around the vertical (y-direction) strips of the loops due to the flow of electric current that forms of an inductive part “L” in the ECM. Further, an electromagnetic interaction occurs between the top and bottom FSSs separated by the thin substrate, creating the mutual induction “M” and series capacitance “Cs” in the ECM [6].

As to measure performances of the square- and circular-loop FSS filters, the FSSs were placed in the middle of horn antennas and an incident plane wave were applied using a vector network analyzer. The performances of both FSSs were measured over the frequency range from 90 to 125 GHz, for which two VNA extender mixers and two horn antennas were also used. A device under test (DUT) was mounted on a rotatable part to measure the oblique angle performance. The antenna-to-antenna distance was kept as 50 cm throughout the measurements and the distance from one antenna to the DUT was 25 cm. Figure 9 shows the block diagram and actual measurement setup of the FSS filters.

The measured responses of the single-layer double-sided square-loop and circular-loop FSS filters are shown in Figure 10a,b. For the final design, the dimension parameters were optimized to resonant at 103 GHz for the square-loop FSS and at 104.5 GHz for the circular-loop FSS in the simulation taking into account of the fabrication tolerances. From Figure 10a, it is observed that the square-loop FSS exhibits the rejection of 26.4 dB at the resonant frequency of 107.5 GHz, which is around 4.5 GHz shifted from the simulated performance. On the other hand, in Figure 10b, it is observed that the circular-loop FSS exhibits the rejection of 25.4 dB at the resonant frequency of 105 GHz, which is just 0.5 GHz shifted from the simulated result. Therefore, it is proven with the actual implementation that the circular-loop FSS is more predictable and less sensitive to its dimension parameter errors as compared to the square-loop FSS.
Also, the proposed FSS filters exhibit insensitive response to the oblique incident angle of 14 degrees, which is adequate for the mm-wave imaging diagnostic system application at KSTAR in Daejeon, Korea. The oblique incident angular performance of the proposed FSS can be increased up to 40 degrees by decreasing the period p of unit cell or gap g between the adjacent elements [6]. In the implemented design, a trade-off between a high Q-factor and high oblique incident performance has been made. In the designed parameters, the large p or g was selected due to the requirement of the high Q-factor, which consequently limited the oblique incident performance. The high Q-factor can also be achieved by selecting small w but the smallest possible w was already chosen due to fabrication limitations. For the KSTAR application, the operation frequency range of the proposed FSS was from 90 GHz to 110 GHz (low-pass band region).

The proposed 105 GHz circular-loop FSS has been implemented and used as a component in the ECEI (Electron Cyclotron Emission Imaging) system, for protecting the imaging antenna-detector array from a high-power stray EM signal. To provide the best performing FSS filters, several filters of the same design were fabricated and tested under same test environment. Figure 11 shows the measured frequency responses of eight circular-loop FSS filters for the KSTAR ECEI system, including the performance deviations with arithmetic mean and standard deviation (STDEV). The measured results of the fabricated filters have negligible differences of ~1 dB in notch-rejection and shift of ~0.25 GHz in resonant frequency due to fabrication tolerances. The proposed circular-loop FSS filter is practical and adequate for the mm-wave imaging diagnostic system applications.

W.M. performed the study, interpreted the data and drafted the manuscript. D.H.K and W.M. helped to perform measurements. K.W.K. and H.C.C. critically revised and finalized the intellectual contents of the manuscript. 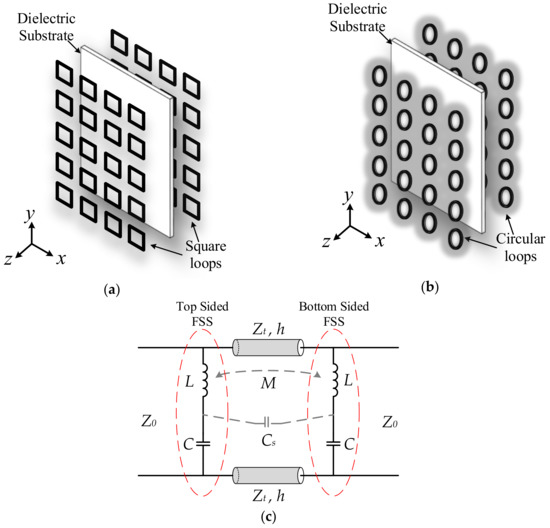 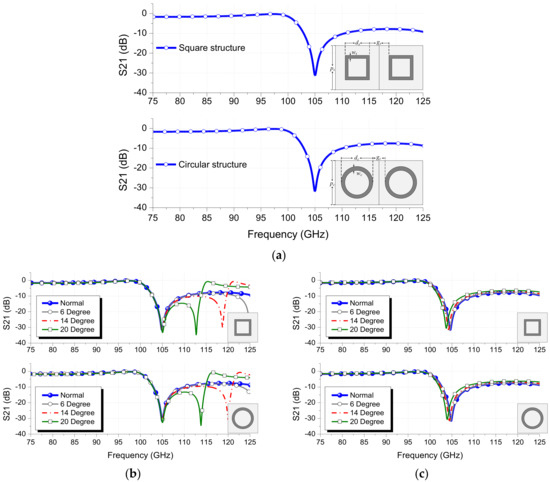 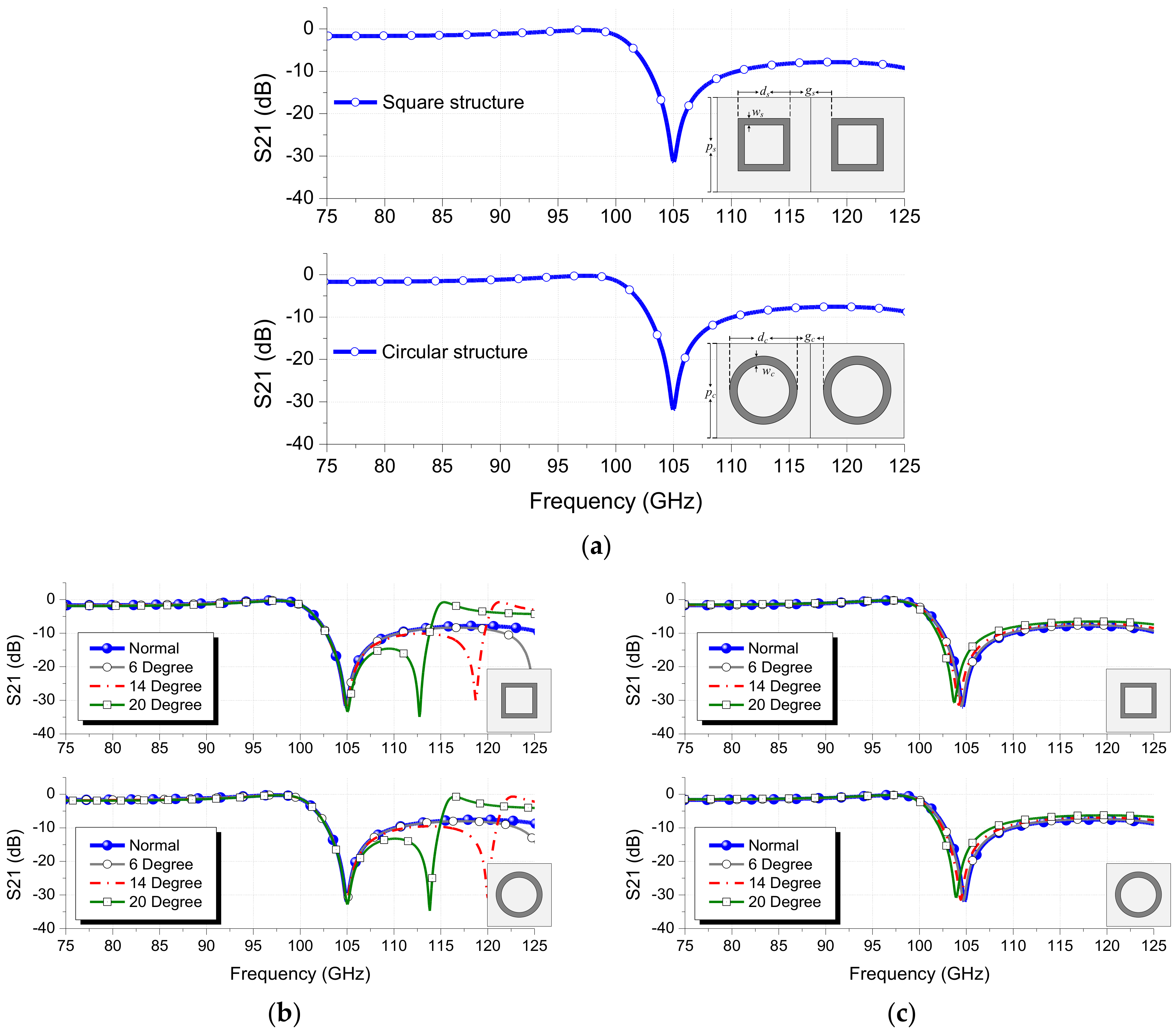 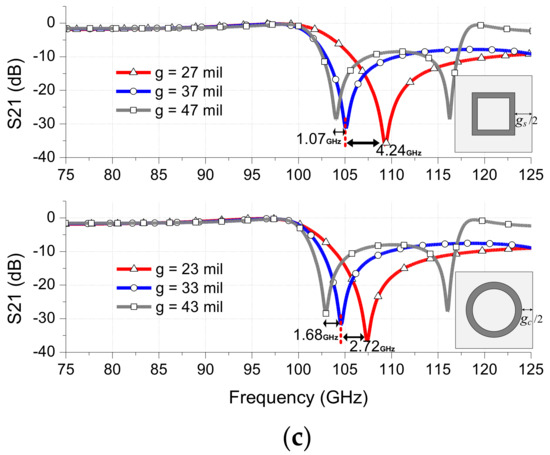 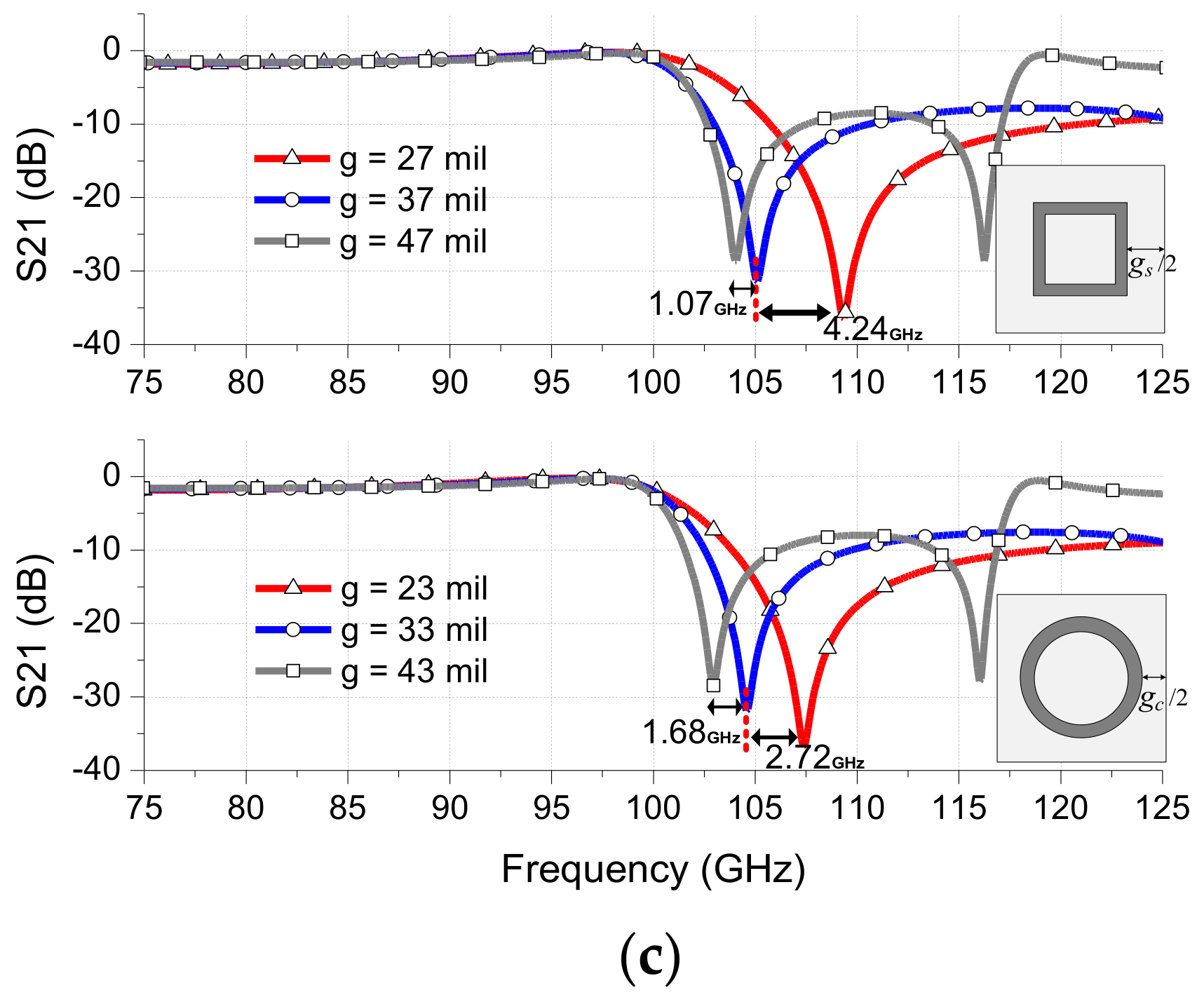 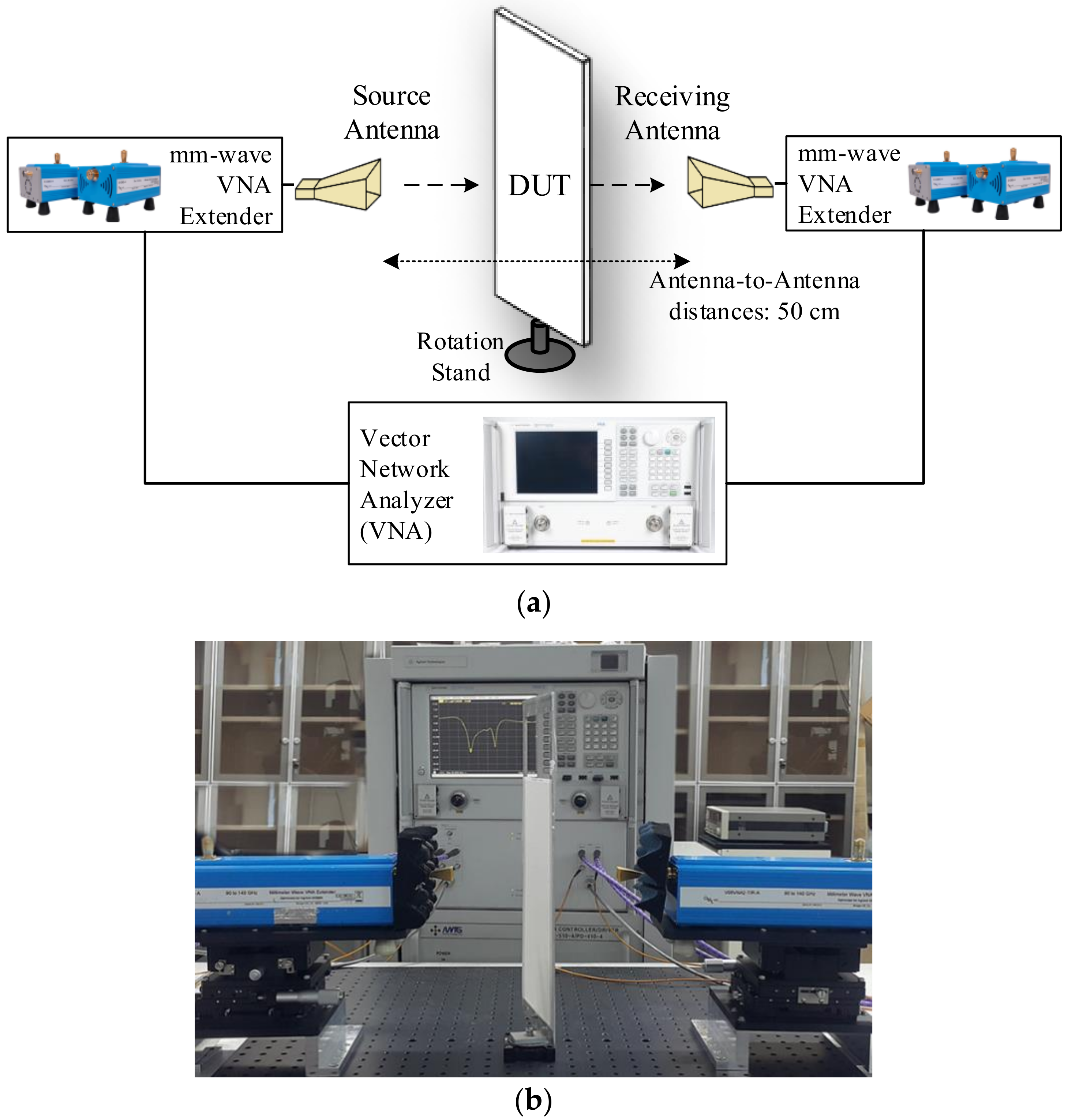 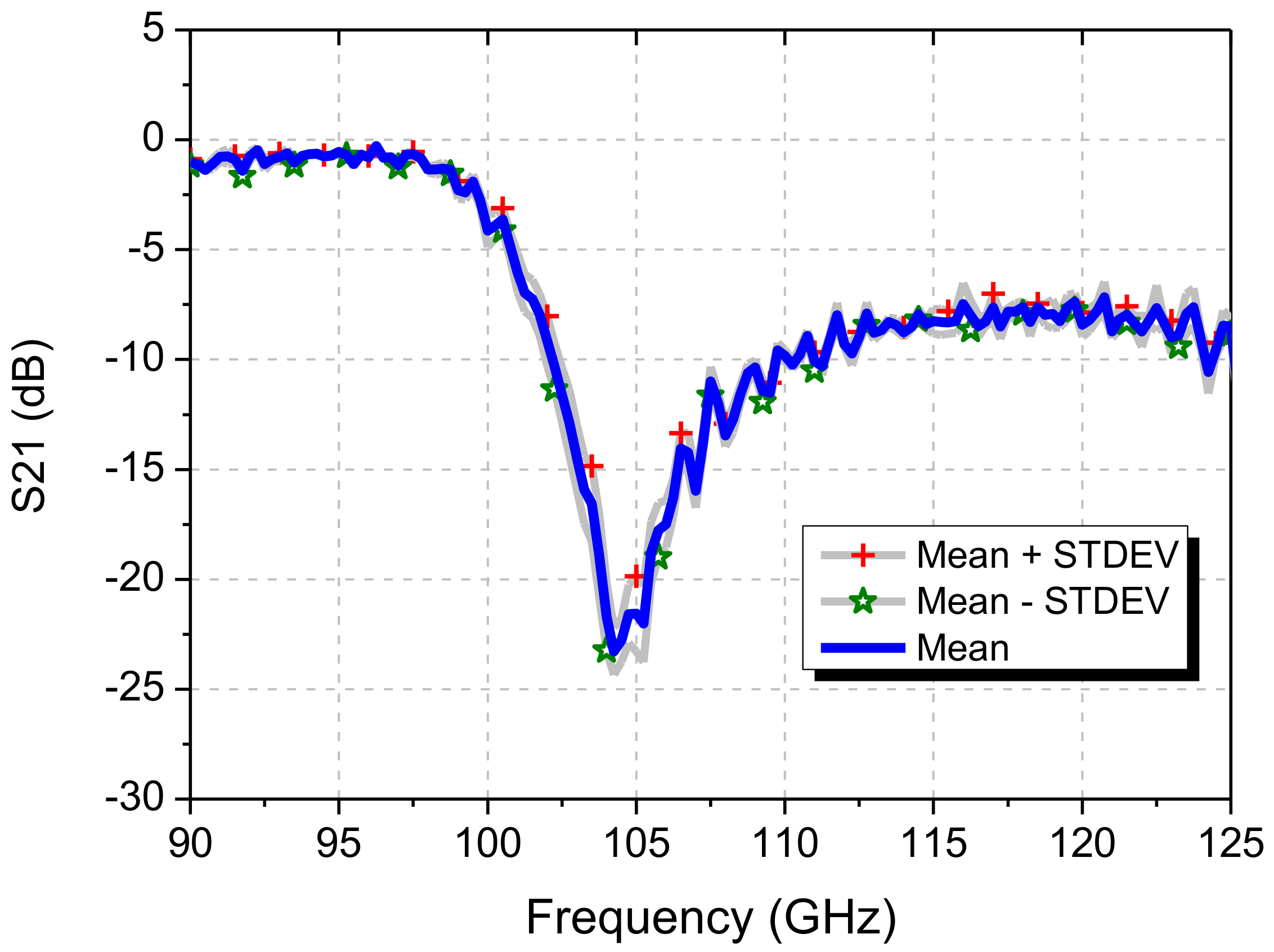