Modeling and Performance of the IEEE 802.11p Broadcasting for Intra-Platoon Communication
Previous Article in Special Issue

Precise characterization of reinforcing bars (rebars) in a concrete structure is of significant importance for construction quality control and post-disaster safety evaluation. This paper integrates ground-penetrating radar (GPR) and electromagnetic induction (EMI) methods for simultaneous estimation of rebar diameter and cover thickness. A prototype of GPR-EMI dual sensor is developed, and a calibration experiment is conducted to collect a standard EMI dataset corresponding to various rebar diameters and cover thicknesses. The handheld testing cart can synchronously collect both GPR and EMI data when moving on the concrete surface, from which a data processing algorithm is proposed to simultaneously estimate the rebar diameter and cover thickness. Firstly, by extracting the apex of the hyperbolic reflection from the rebar in the preprocessed GPR profile, the rebar position is determined and further used to extract the effective EMI curve. Then, the rebar diameter and cover thickness are simultaneously estimated from the minimum mean square error between the measured and calibrated EMI data under the constraint of the GPR-estimated cover thickness. A laboratory experiment is performed using four casted concrete specimens with 11 embedded steel rebars. The results show that the diameters of 10 rebars are correctly estimated out of the 11 rebars, and the maximum estimation error for the cover thickness is 6.7%. A field trial is carried out in a newly-constructed building, and the diameters of four tested rebars are all accurately estimated while the estimation errors of the cover thickness are less than 5%. It is concluded that the developed GPR-EMI dual sensor and the proposed algorithm can estimate the rebar diameter and cover thickness accurately by a single scan. View Full-Text
Keywords: non-destructive testing (NDT); ground-penetrating radar (GPR); electromagnetic induction (EMI); rebar detection non-destructive testing (NDT); ground-penetrating radar (GPR); electromagnetic induction (EMI); rebar detection
►▼ Show Figures 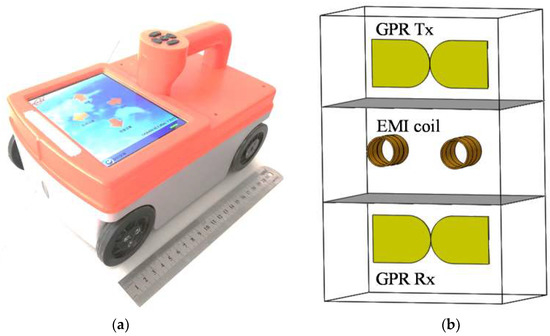