Automation of the bin picking task with robots entails the key step of pose estimation, which identifies and locates objects so that the robot can pick and manipulate the object in an accurate and reliable way. This paper proposes a novel point pair feature-based descriptor named Boundary-to-Boundary-using-Tangent-Line (B2B-TL) to estimate the pose of industrial parts including some parts whose point clouds lack key details, for example, the point cloud of the ridges of a part. The proposed descriptor utilizes the 3D point cloud data and 2D image data of the scene simultaneously, and the 2D image data could compensate the missing key details of the point cloud. Based on the descriptor B2B-TL, Multiple Edge Appearance Models (MEAM), a method using multiple models to describe the target object, is proposed to increase the recognition rate and reduce the computation time. A novel pipeline of an online computation process is presented to take advantage of B2B-TL and MEAM. Our algorithm is evaluated against synthetic and real scenes and implemented in a bin picking system. The experimental results show that our method is sufficiently accurate for a robot to grasp industrial parts and is fast enough to be used in a real factory environment. View Full-Text
Keywords: robotic bin picking; pose estimation; Boundary-to-Boundary-using-Tangent-Line (B2B-TL); Multiple Edge Appearance Models (MEAM) robotic bin picking; pose estimation; Boundary-to-Boundary-using-Tangent-Line (B2B-TL); Multiple Edge Appearance Models (MEAM)
►▼ Show Figures 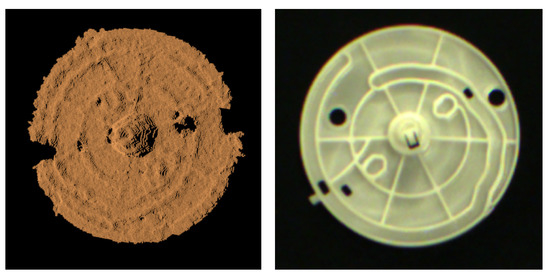