Wireless power transfer (WPT) is a promising technology to realize the vision of Internet-of-Things (IoT) by powering energy-hungry IoT nodes by electromagnetic waves, overcoming the difficulty in battery recharging for massive numbers of nodes. Specifically, wireless charging stations (WCS) are deployed to transfer energy wirelessly to IoT nodes in the charging coverage. However, the coverage is restricted due to the limited hardware capability and safety issue, making mobile nodes have different battery charging patterns depending on their moving speeds. For example, slow moving nodes outside the coverage resort to waiting for energy charging from WCSs for a long time while those inside the coverage consistently recharge their batteries. On the other hand, fast moving nodes are able to receive energy within a relatively short waiting time. This paper investigates the above impact of node speed on energy provision and the resultant throughput of energy-constrained opportunistic IoT networks when data exchange between nodes are constrained by their intermittent connections as well as the levels of remaining energy. To this end, we design a two-dimensional Markov chain of which the state dimensions represent remaining energy and distance to the nearest WCS normalized by node speed, respectively. Solving this enables providing the following three insights. First, faster node speed makes the inter-meeting time between a node and a WCS shorter, leading to more frequent energy supply and higher throughput. Second, the above effect of node speed becomes marginal as the battery capacity increases. Finally, as nodes are more densely deployed, the throughput becomes scaling with the density ratio between mobiles and WCSs but independent of node speed, meaning that the throughput improvement from node speed disappears in dense networks. The results provide useful guidelines for IoT network provisioning and planning to achieve the maximum throughput performance given mobile environments. View Full-Text
Keywords: internet-of-things; opportunistic networks; wireless power transfer; inter-meeting time; Markov chain; node speed; battery capacity; node density internet-of-things; opportunistic networks; wireless power transfer; inter-meeting time; Markov chain; node speed; battery capacity; node density
►▼ Show Figures 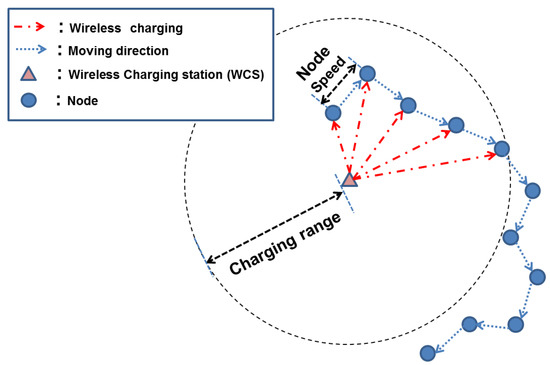