A numerical simulation is carried out in the 2–10 GHz band sampled with 1000 frequency points. A radar imaging system made of a transmitting antenna located in the center of a square reception array composed of 36 antennas separated by = 3.5 cm according to the two transverse dimensions x and z, being the central wavelength of the operating bandwidth (Figure 7), is proposed.
A set of nine target points are arranged in front of the array in order to be located by the imager. The 36 signals collected by the receiving antennas are then numerically multiplexed to reproduce the behavior of a dispersive component (for example, a cavity) connected to the array. A signal is then measured on its unique output port, from which it is possible to calculate a radar image using the computational approaches presented previously. The multiplexer component is characterized by a quality factor determining the decay time of its time responses, which one wishes the longest possible to limit the level of correlation between its different channels. In the simulated case, the quality factor considered is Q = 377, corresponding to a decay time ns. In practice, these values are close to the performance of two-dimensional cavities made with microwave substrates, and are well below the decay times achievable with empty metal cavities whose quality factor easily reaches several thousand. The time-dependent signal measured at the output of the simulated multiplexer component is shown in Figure 8.
The signal reconstruction is carried out using Equation (7) for the reference equalization technique and Equation (14) for the proposed method. The reconstruction by the proposed technique is based on an approximate prior knowledge of the range covered by the object to be imaged, which can be refined by means of a series of reconstructions making it possible to reduce the size of the time window considered to improve the reconstruction of the signals. The reconstructed signals are presented in Figure 9, and compared to the original signals received by the antennas.
The quality of the reconstructions is evaluated by computing the peak signal-to-noise ratio (PSNR), considering the signals originally received by the radiating aperture as a reference. In the case of the equalization reconstruction technique, the calculated PSNR is 13.6 dB, while the proposed method yields a PSNR of up to 19.2 dB.
The proposed technique thus allows for a more accurate reconstruction of the signals received by the antennas compared to the equalization technique initially developed in [12], while remaining compatible with the use of Fourier domain image reconstruction techniques to limit the computation time compared to direct matrix reconstruction as shown in Figure 2 and studied in [23]. In this case, the measured signal time gated between ns and ns, and the antenna signal time is truncated between ns and ns, allowing for reconstructions computed on average in 9.5 ms by a generalized minimum residual method after a unique pre-computing time of 11 ms for the evaluation of , compared to 3 ms with the equalization approach. These calculations are carried out on a computer equipped with a 2.8 GHz dual-core processor. In order to facilitate the interpretation of these results, a reconstruction of the scene is carried out by back-propagation from the signals directly received by the antennas, the signals reconstructed by the equalization technique and by the proposed technique. The results are presented in Figure 10.
Once again, the results corresponding to the proposed reconstruction technique are close to those obtained without the computational approach, in comparison with the image reconstructed using the equalization technique that leads to the creation of artifacts that make the location of the source points difficult. The PSNR is evaluated again to compare these two three-dimensional images with the reference computed with the original signals. The image calculated using equalization corresponds to a PSNR of 19 dB, while the image calculated by the proposed method yields a PSNR of 26.3 dB. The application of such an approach thus enables the reconstruction of an estimate of the target reflection function while decomposing the initial computational imaging problem as expressed by the Equation (2). For an image such as the one presented composed of voxels, the matrix linking the measure to the reflection function of the target would have the dimension . The use of time-gating on the measured signal can possibly reduce the dimensions of this matrix to . In comparison, the proposed technique decomposes this matrix into two parts and , the latter not actually being calculated and replaced by a Fourier domain range migration algorithm. Thus, in the example shown, memory consumption is limited by switching from a matrix to a matrix , correspond to a memory consumption 173 times smaller. In an obvious way, the memory consumption and the computation speed is impacted by the depth of the area to be imaged. However, it is possible to reduce the size of the problem even more by also removing the almost zero contributions within the measured signal itself, but such an approach would require the use of non-uniform fast Fourier transforms and is therefore left aside to keep this proof of concept as simple as possible. This selection can be done according to a signal level that may correspond to the noise floor or an arbitrarily higher selected level that will obviously limit the quality of reconstructions of the signals and images but make the overall computation faster and less memory-consuming.
Having presented a numerical validation of this technique that highlights the improvements allowed by this new approach compared to the equalization techniques previously used, it is proposed to validate the application of this technique in an experimental context in the following section.

The proposed reconstruction technique is now being confronted with experimental validation in the 2–4 GHz band, using a set-up introduced in [33,34]. The computational imaging component for this application is a planar cavity with 16 input ports connected to Vivaldi antennas and up to 4 output ports (Figure 11).
The cavity is fabricated with a 0.65-mm-thick microwave substrate RT/Duroid 6006 with a hole engraved on its top conductor for minimizing the level of correlation between transfer functions [34,37,38]. This experimental demonstration had previously revealed the relationship between the number of signals measured on the ports of a single component and the quality of the reconstructed images, exploiting the frequency diversity of the transfer functions measured by 300 frequency samples [33,34]. The average quality factor estimated from the damping time of the impulse responses of this component is about 200. The antenna spacing is 7 cm, which is 0.7 times the central operating wavelength. It is proposed in this framework to compare the reconstruction results obtained with one or several signals measured by the oscilloscope on the output ports of the component, by successively applying the equalization reconstruction technique and the proposed method. The effect of direct coupling is mitigated by performing a blank measurement, subtracted from the acquisitions made when the targets are put in place. Two metal cylinders are arranged opposite the antenna array used in reception and are illuminated by a horn antenna located above the center of the array (Figure 12).
These experiments are conducted using an arbitrary signal generator (Agilent M8190A 12 GSa/s) and oscilloscope (Agilent DSA90404A 20 GSa/s), which yield a maximum frequency of up to 4GHz without the use of mixers. Image computations are performed using back-propagation with the signals reconstructed on the antennas using the reference equalization technique and the proposed method. In this context, the impact of the number of measured signals on the image reconstruction quality is studied using, successively, 1, 2, and 4 responses measured on the 2D cavity ports.
The images are reconstructed from time gated signals between 0 and 30 ns, in each case limiting the appearance of speckle around the targets and, in the proposed method, allowing for a better estimation of the signals received by the antennas. The results obtained using the proposed method seem to present, in each case, a lower level of speckle around the targets and yield a better identification of their position than with the equalization technique. However, it can be seen that the quality of the results obtained with the proposed technique remains limited when using a single signal. In comparison with the numerical study presented above, this experimental demonstration is limited by model approximations and measurement uncertainties that can prevent the algorithm from converging towards an accurate estimation of the signals received by the antennas. However, using more measured information with 2 and 4 signals makes it much easier to converge towards better results.

A new reconstruction technique adapted to microwave and millimeter-wavecomputational imaging is proposed in this article, taking advantage of the sparsity of signal representation in the time domain. This technique is an interesting alternative to methods based on the use of sensing matrix in computational imaging, which allow for high-quality reconstructions but impose significant levels of memory consumption and computation times. Similar to the equalization techniques initially introduced in this field, the presented approach is based on a decomposition of this sensing matrix in order to reduce its dimensions and make use of conventional Fourier-domain imaging techniques possible. The technique introduced in this article, however, allows more accurate antenna signal estimates to be obtained, while maintaining reasonable computation times that are compatible with real-time applications. After the theoretical concepts necessary for the use of this technique were introduced, the effectiveness of such an approach was validated numerically and then experimentally in the context of depth-limited radar imaging applications that are particularly well suited to this technique.
All time-gating operations presented here are based on the preservation of uniform sampling in order to simplify this proof of principle. The study of very large problems could therefore soon be lightened by adapting this technique to the selection of only measurement samples with a significant amplitude in order to propose reconstructions of comparable quality to the results presented in this article, but calculated in reduced time.

T.F. proposed the initial idea and realized the numerical proof of concept. T.F. and C.D. conceived and performed the experimental validation. All authors analyzed the data and discussed the results. T.F. wrote the paper. 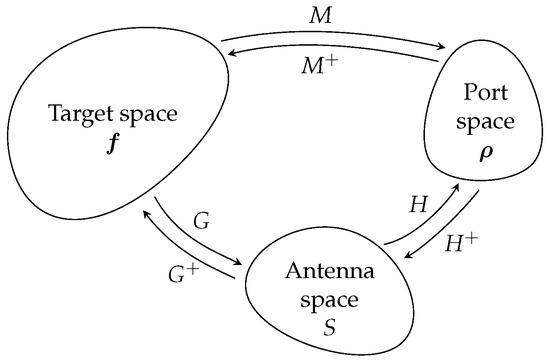 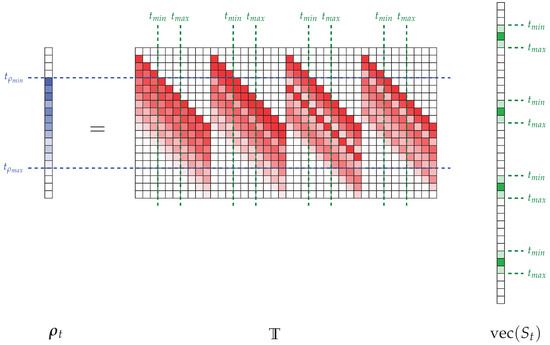 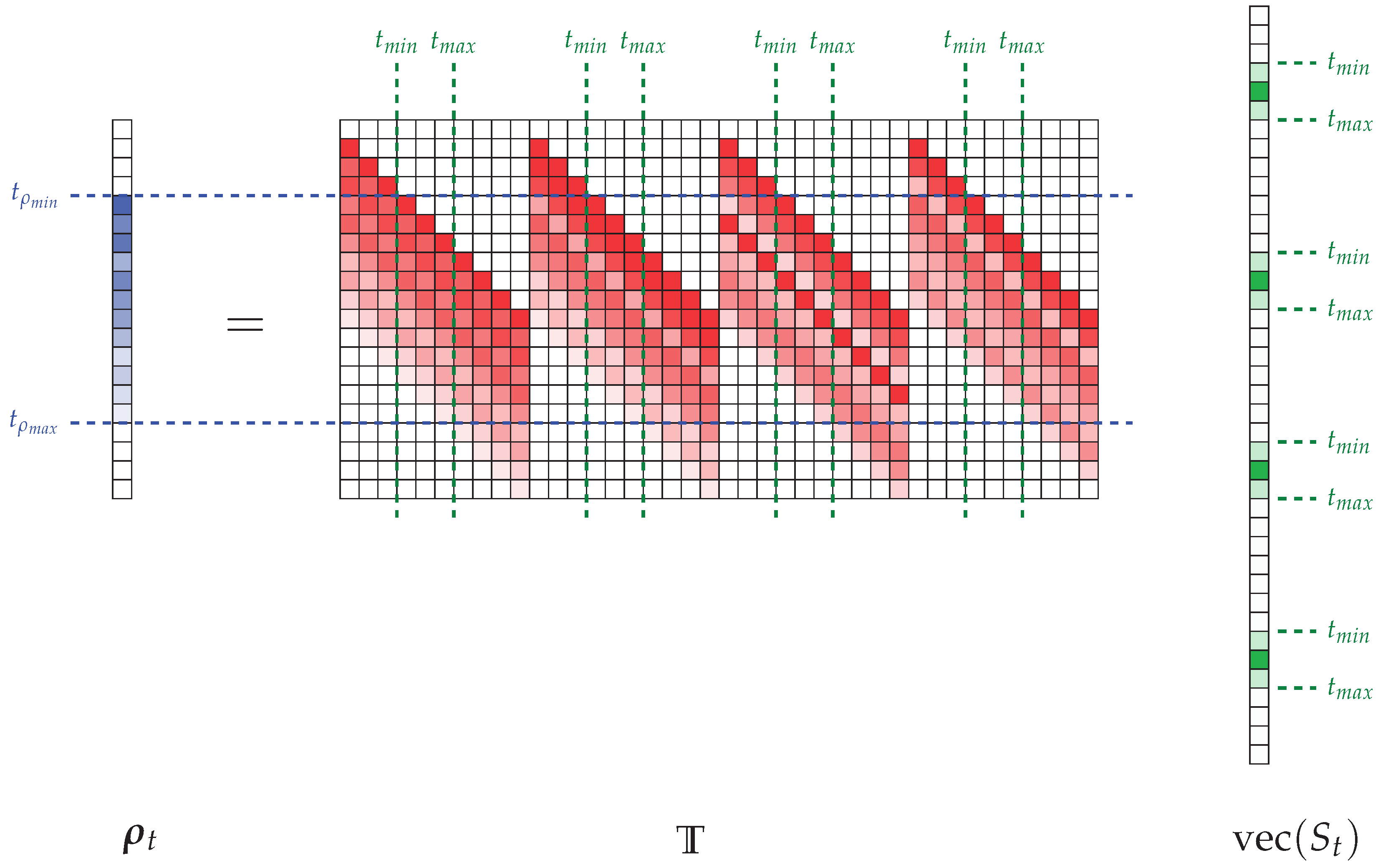 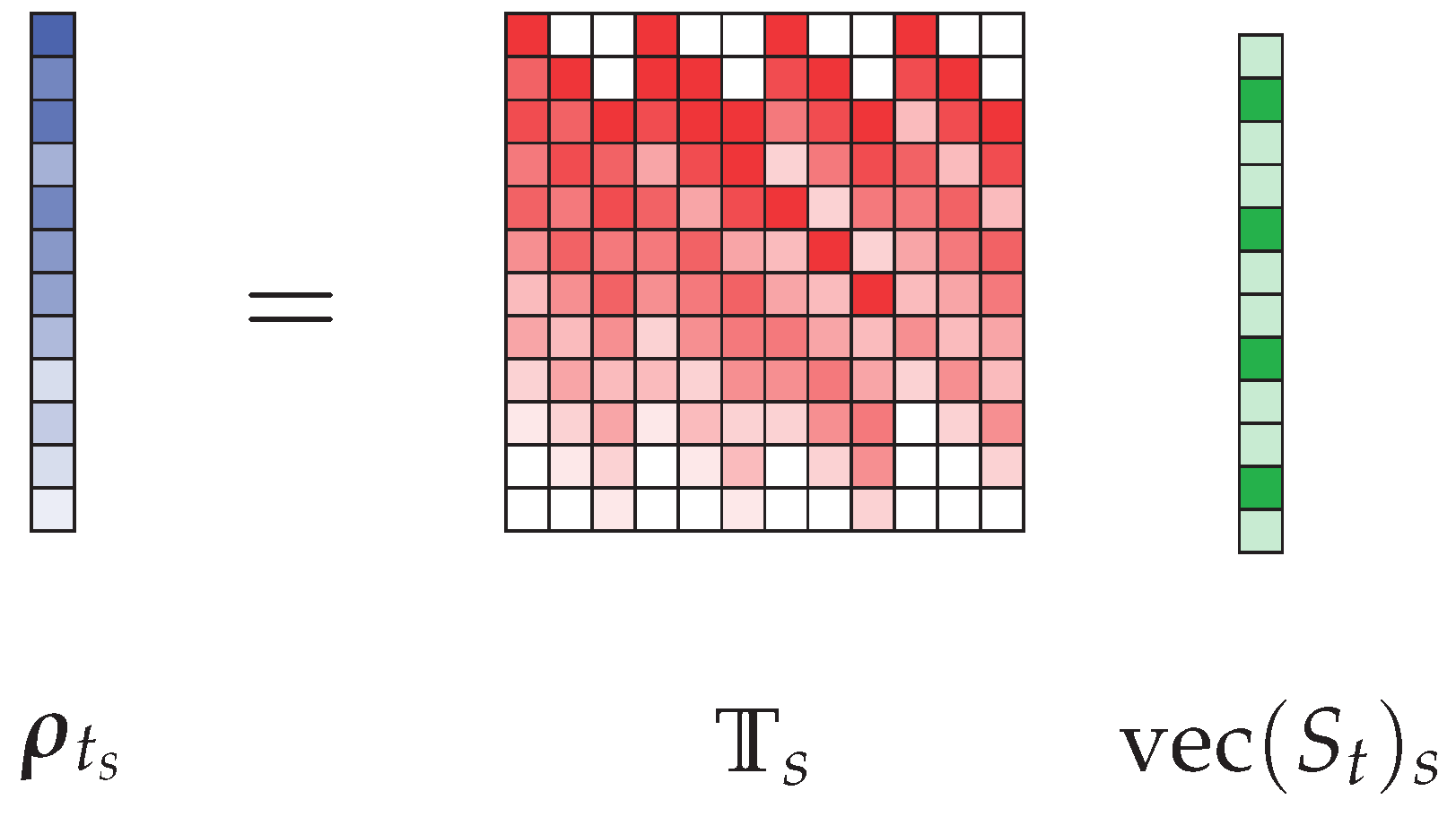 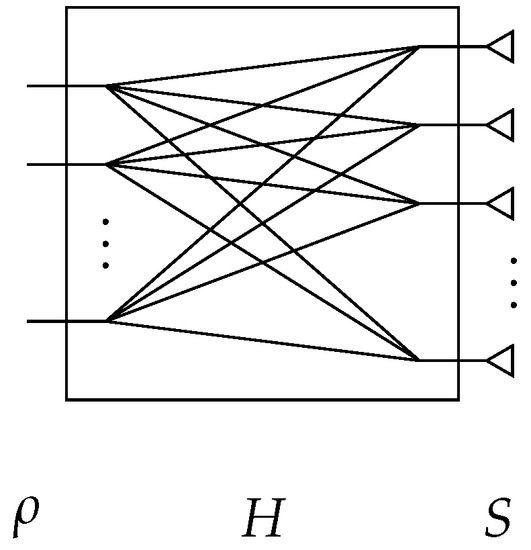 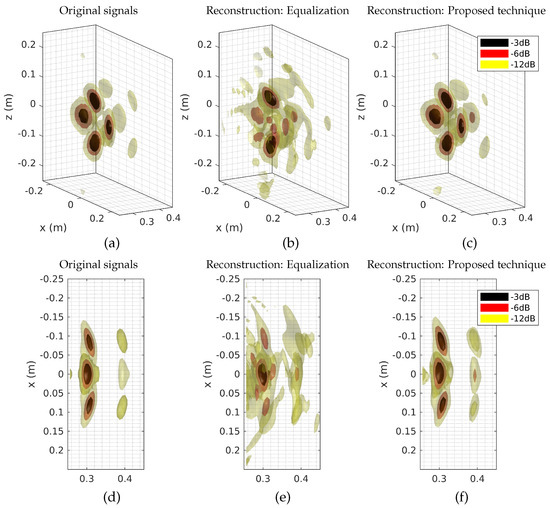 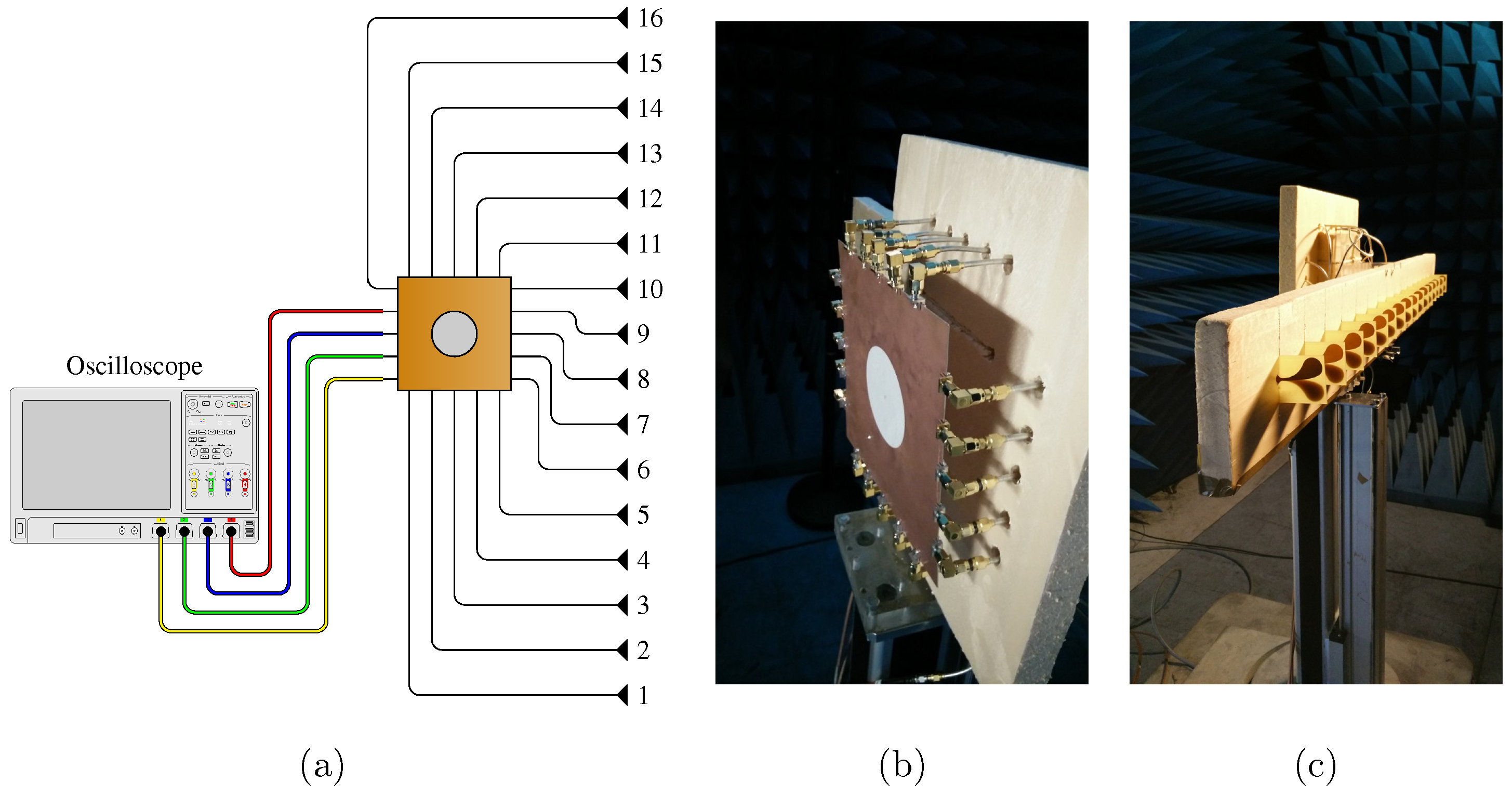 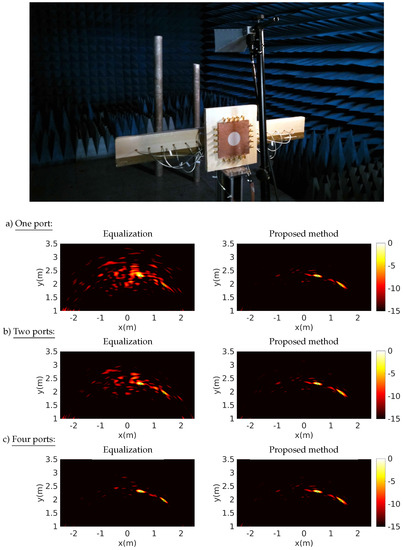