Different from GPS, GLONASS, GALILEO and BeiDou-3, it is confirmed that the code multipath bias (CMB), which originate from the satellite end and can be over 1 m, are commonly found in the code observations of BeiDou-2 (BDS) IGSO and MEO satellites. In order to mitigate their adverse effects on absolute precise applications which use the code measurements, we propose in this paper an improved correction model to estimate the CMB. Different from the traditional model which considering the correction values are orbit-type dependent (estimating two sets of values for IGSO and MEO, respectively) and modeling the CMB as a piecewise linear function with a elevation node separation of 10°, we estimate the corrections for each BDS IGSO + MEO satellite on one hand, and a denser elevation node separation of 5° is used to model the CMB variations on the other hand. Currently, the institutions such as IGS-MGEX operate over 120 stations which providing the daily BDS observations. These large amounts of data provide adequate support to refine the CMB estimation satellite by satellite in our improved model. One month BDS observations from MGEX are used for assessing the performance of the improved CMB model by means of precise point positioning (PPP). Experimental results show that for the satellites on the same orbit type, obvious differences can be found in the CMB at the same node and frequency. Results show that the new correction model can improve the wide-lane (WL) ambiguity usage rate for WL fractional cycle bias estimation, shorten the WL and narrow-lane (NL) time to first fix (TTFF) in PPP ambiguity resolution (AR) as well as improve the PPP positioning accuracy. With our improved correction model, the usage of WL ambiguity is increased from 94.1% to 96.0%, the WL and NL TTFF of PPP AR is shorten from 10.6 to 9.3 min, 67.9 to 63.3 min, respectively, compared with the traditional correction model. In addition, both the traditional and improved CMB model have a better performance in these aspects compared with the model which does not account for the CMB correction. View Full-Text
Keywords: BeiDou; code multipath bias; multipath combination; precise point positioning; wide-lane fractional cycle bias BeiDou; code multipath bias; multipath combination; precise point positioning; wide-lane fractional cycle bias
►▼ Show Figures 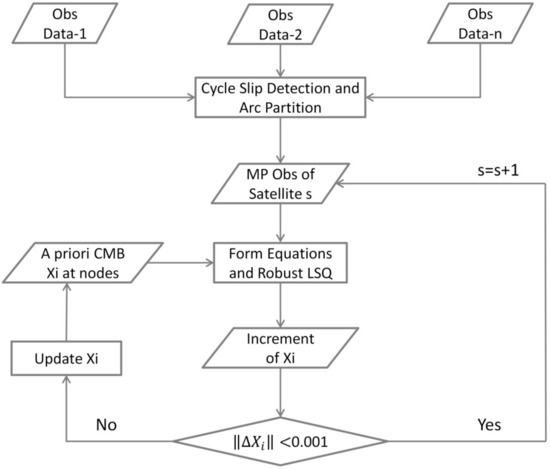