A porous silicon microcavity (PSiMC) with resonant peak wavelength of 635 nm was fabricated by electrochemical etching. Metal nanoparticles (NPs)/PSiMC enhanced fluorescence substrates were prepared by the electrostatic adherence of Au NPs that were distributed in PSiMC. The Au NPs/PSiMC device was used to characterize the target DNA immobilization and hybridization with its complementary DNA sequences marked with Rhodamine red (RRA). Fluorescence enhancement was observed on the Au NPs/PSiMC device substrate; and the minimum detection concentration of DNA ran up to 10 pM. The surface plasmon resonance (SPR) of the MC substrate; which is so well-positioned to improve fluorescence enhancement rather the fluorescence enhancement of the high reflection band of the Bragg reflector; would welcome such a highly sensitive in biosensor.
Keywords: porous silicon microcavity; gold nanoparticles; DNA; fluorescence porous silicon microcavity; gold nanoparticles; DNA; fluorescence

PSi is a biocompatible photonic material, which has potential applications in the field of biosensing [1,2]. In particular, functionalized PSi can be fabricated into multiple sensors. Rapid desorption of nicotine from respiratory gas has been achieved by analytical ionization on the porous silicon surface [3]. Metal (Ni and Bi) coatings on the PSi nanostructure surface were prepared for high capacity and the stable performance anode material lithium ion battery [4]. As previously described, PSi has been used for the preparation of a variety of sensors, especially in the field of optical sensor.
Currently, labeled-free and labeled biosensors are summarized as the two common types of PSi optical biosensors. The variation of the effective refractive index of the PSi film is caused by the entrance of biomolecules attached to the PSi, which is directly translated to the movement of the spectrum [5,6,7] in labeled-free biosensor, and the change of luminescence center [8,9]. Labeled biological detection has the characteristics of high sensitivity, good selectivity, less biomass, and fast response time. Two main approaches utilizing fluorophore-labeled for the amplification of the optical signal in biosensor applications were developed. In refractive index-enhanced reflectance spectrum movement, the binding of fluorophore-labeled molecules to biomolecular recognition elements attached to a PSi sensor surface is probed by the movement of reflectance spectrum. This method was implemented by using the high refractive index of quantum dots [10]. In SPR-enhanced fluorescence, the enhanced field of metal NPs increases the fluorescence intensity of the fluorophore-labeled molecules [11,12,13].
Metal NPs combined with photonic crystal technology can further enhance the optical signal and improve sensitivity. Fluorescence enhancement of the Au NPs in TiO2 inverse opal photonic crystal has achieved SARS and HIV virus detection using label-free DNA, the signal intensity and the detection sensitivity is improved by one order of magnitude [14]. Park et al. [15] reported the formation of photonic crystals from the resin and further enhanced the fluorescence by embedding Ag NPs. In order to further explore the new method of high sensitivity detection of the biology based on the PSi photonic devices, the combination of the unique photon transmission control capability (band-gap of Bragg reflector, defect mode of MC etc.) of the PSi photonic crystal device noble metal NPs is dedicated to develop a biosensor with better performance based on fluorescence detection. In recent years, some new advances in the fluorescence enhancement analysis of the probe molecules on the PSi Bragg mirror obtained by our group are summarized. When the fluorescence emission peak of the probe molecules falls into the high reflection band of PSi Bragg reflector, the fluorescence intensity of the probe can be increased [16]; DNA has been specifically selected by fluorescence resonance energy transfer(FRET) from quantum dots and Au NPs on PSi Bragg reflector substrate [17]. However, few studies are concerned with the PSi photonic crystal fluorescence enhancement for biological detection [18,19,20]. Especially, the combination of metal NPs and the PSi photonic crystal is used to further improve the performance of biosensors based on fluorescence detection technology. Therefore, the PSi with biological characteristics, large surface area characteristics, and easy preparation of all kinds of photonic devices could be combined with SPR to futher enhance the sensitivity of biosensors for detecting fluorescence changes.
This paper mainly studies (1) the impact of Au NPs adsorbed on PSiMC and the Bragg reflector on the fluorescence enhancement, (2) the specificity identification of DNA on the Au NPs/PSiMC device sensor, and (3) the linear correlation between fluorescence intensity and the concentrations of RRA-DNA. The flow chart of the PSiMC device substrate for the detection of DNA is shown in Figure 1. Firstly, the PSiMC were functionalized to adsorb Au NPs; secondly, the thiol modified DNA was connected with the Au NPs as a target DNA; then, complementary DNA modified with RRA was hybridized with target DNA.

PSi was prepared by standard anodic etching technique [21]. The material used is p-type monocrystal silicon <100> (resistivity 0.03–0.06 Ω·cm). The etching solution for electrochemical etching of PSi is 10% hydrofluoric acid alcohol solution. Prior to preparation of the samples, the parasitic layer of highly doped p-type silicon wafer was removed by short electrochemical etching and dissolution in NaOH. It has been proved that the existence of this parasitic film affects the optical properties of the photonic structure, reduces the pore size of the surface [22], and prevents the molecules from entering the porous silicon structure. The preparation parameters of PSiMC are shown in Table 1. As shown in Figure 2, the distribution of MC layers: a cavity layer is introduced into the two symmetrically distributed Bragg reflectors; the corrosion current density of cavity layer is 110 mA/cm2, the A layer is a high porosity layer with a current density of 110 mA/cm2, the B layer is the low porosity layer, and the current density is 60 mA/cm2. The arrangement of the PSiMC structure is (AB)6A4(BA)6, and the resonance cavity wavelength is 635 nm. Bragg reflectors with 14 cycles, which are arranged as (AB)14, are predicted to have the same thickness of MC. The fresh samples were thoroughly cleaned with deionized water and dried under N2 airsteam.
More significantly, however, the 3D AFM image corresponding to the porous silicon layer, was illustrated in Figure 3. In fact, AFM images have shown, before gold deposition, almost irregular and randomly dis-tributed nano-crystalline silicon pillars (pointed silicon tip). Consequently, the gold deposit will follow this morphology and it will overlay each surface at a certain distance.

2.2. The Functionalization of PSi

The fresh PSi devices are easy to oxidize, which affects the stability of the fabricated sensors. The fresh PSi devices are fully oxidized in hydrogen peroxide (30%) for 24 h at room temperature. After oxidation, the PSi device surface will form relatively stable silicon oxide, and then, oxidized PSi samples are aminated for 1h in 5% (3-aminopropyl) triethoxysilane (APTES), cleaned with deionized water and dried under N2 airsteam. The surface of the PSi after aminated treatment is positively charged and can electrostatically adsorb Au NPs prepared by citrate reduction [23,24]. The interaction was stable and irreversible.

2.3. The Fabrication of Gold Nanoparticles

Au NPs were prepared by hydrothermal method given in [25]. Chlorauric acid solution (50 mL, 1.0 mM) was heated to 100 ℃ by heat collecting magnetic heating stirrer. Under boiling, sodium citrate solution was quickly added (8 mL, 1 wt %), with continuous heating while stirring. Until the color of the solution changed from yellow to red wine, heating did not commence, and cooling to room temperature was preserved. After being soaked in colloidal Au solution for 5 h, the aminated PSi samples were removed and rinsed with deionized water.
The absorption spectra of the Au NPs are presented in Figure 4a, and the strongest absorption peak is located at 518 nm. Regarding the morphology of functionalized PSi deposited with Au NPs as shown in Figure 4b, Au NPs evenly distributed on the surface and the pores of PSi can be clearly observed, and the diameter of Au NPs is 7 ± 2 nm. A zoom-in SEM characterization figure of porous silicon microcavity (PSiMC) and the hybrid nanostructure are provided in Figure S1 (supporting information).

DNA fragments are purchased from the INVITROGEN TRADING Co., Ltd. (Shanghai, China). The sequence of DNA fragments is shown in Table 2; sample 1 and sample 2 are applicable for Au NPs/PSiMC metal enhancement substrate; sample 3 is applied to bare PSiMC substrate without Au NPs.
TE buffer is made up of Tris(hydroxymethyl)aminomethane (Tris) and ethylenediaminetetraacetic acid (EDTA), which is mainly used to dissolve DNA and can store DNA steadily. Before being diluted with TE buffer (pH = 8.0), the DNA fragments were centrifuged for 30 s and aggregated to the bottom of the tube. In aseptic operation, DNA fragments were diluted to 10 µM, stored at −20 °C, and protected from light. The DNA primer modified with 50 µL Thiol-C6 S-S (THS) was activated with Tris (2-carboxyethyl) phosphine hydrochloride (TCEP, 1 mM) to cut off the disulfide bond for 1 h at room temperature. The concentration of TCEP is 1 mM. 50 µL THS-DNA (10 µM) was dripped into PSiMC adsorbed with Au NPs, incubated for 10 h in a 37 °C incubator and removed from the unconnected DNA with TE buffer. Then, the samples were blocked with EA (3 M HEPES buffer, pH = 9.0) 37 °C for 1h. THS-DNA was immobilized on Au NPs as a target DNA, and the final aim was to achieve hybridization with the captured probe RRA-DNA. The UV-Vis absorption spectrum of RRA-DNA is shown in Figure 5. The peak at 260 nm is the absorption peak of DNA, and the absorption peak of RRA is located at 572 nm. 40 µL Rhodamine Red o-X (RRA)-modified DNA fragments with a concentration of 10 µM–10−4 µM were dripped on PSiMC linked with target DNA, and incubated at 37 °C for 10 h. Then, the sensors were cleaned with TE buffer and dried.

The measurement of fluorescence spectrum employed the UV-Vis fluorescence spectrophotometer (Hitachi F-4600, Tokyo, Japan) with a slit width of 5 nm. The excitation power was 700 mW, and the response time was 0.004 s. The data were collected for five different positions from each sample, and averaged.
The reflectance spectra were collected using U-4100 (Hitachi, Tokyo, Japan). The incident angle is 5°.
Measurement of surface topography was achieved by FESEM (ZEISS SUPRA55 VP, Oberkochen, Germany).

The following are available online at https://www.mdpi.com/1424-8220/18/2/661/s1, Figure S1: (a) The zoom-in SEM figures of porous silicon microcavity (PSiMC), and (b) the hybrid nanostructure of gold nanoparticles (Au NPs) deposited on porous silicon. 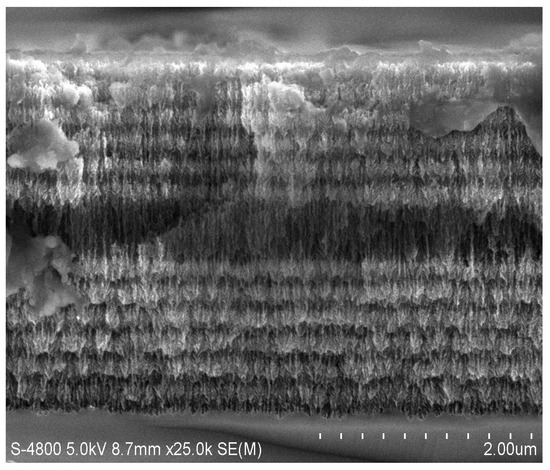 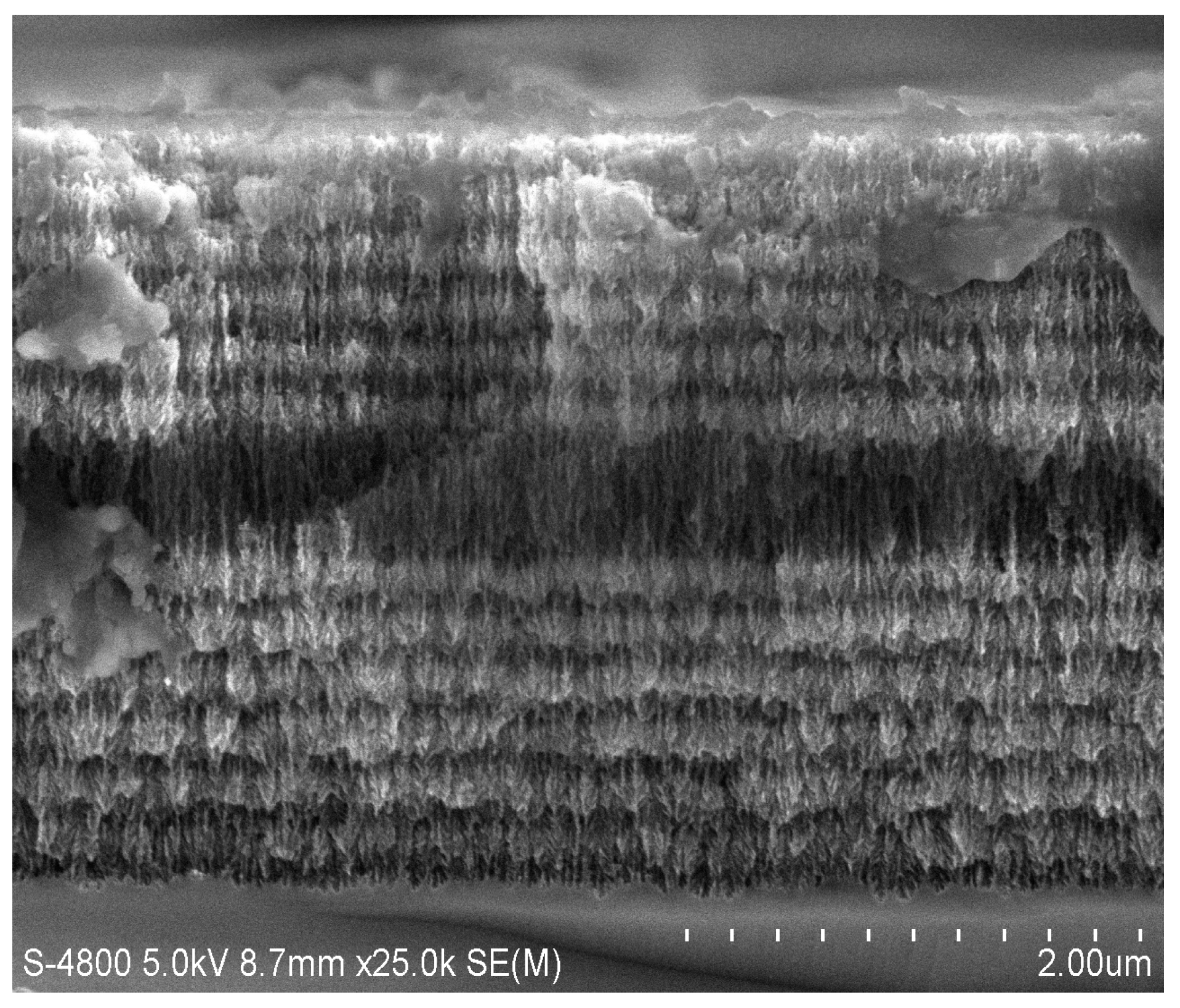 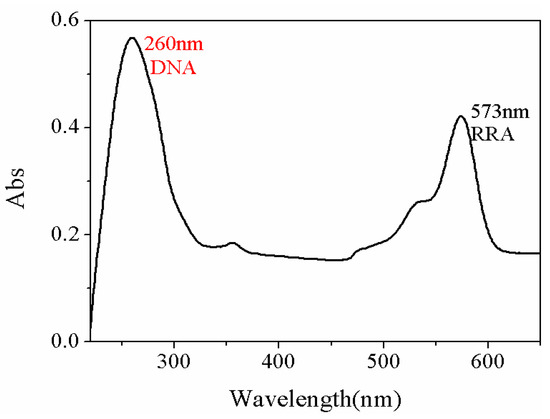 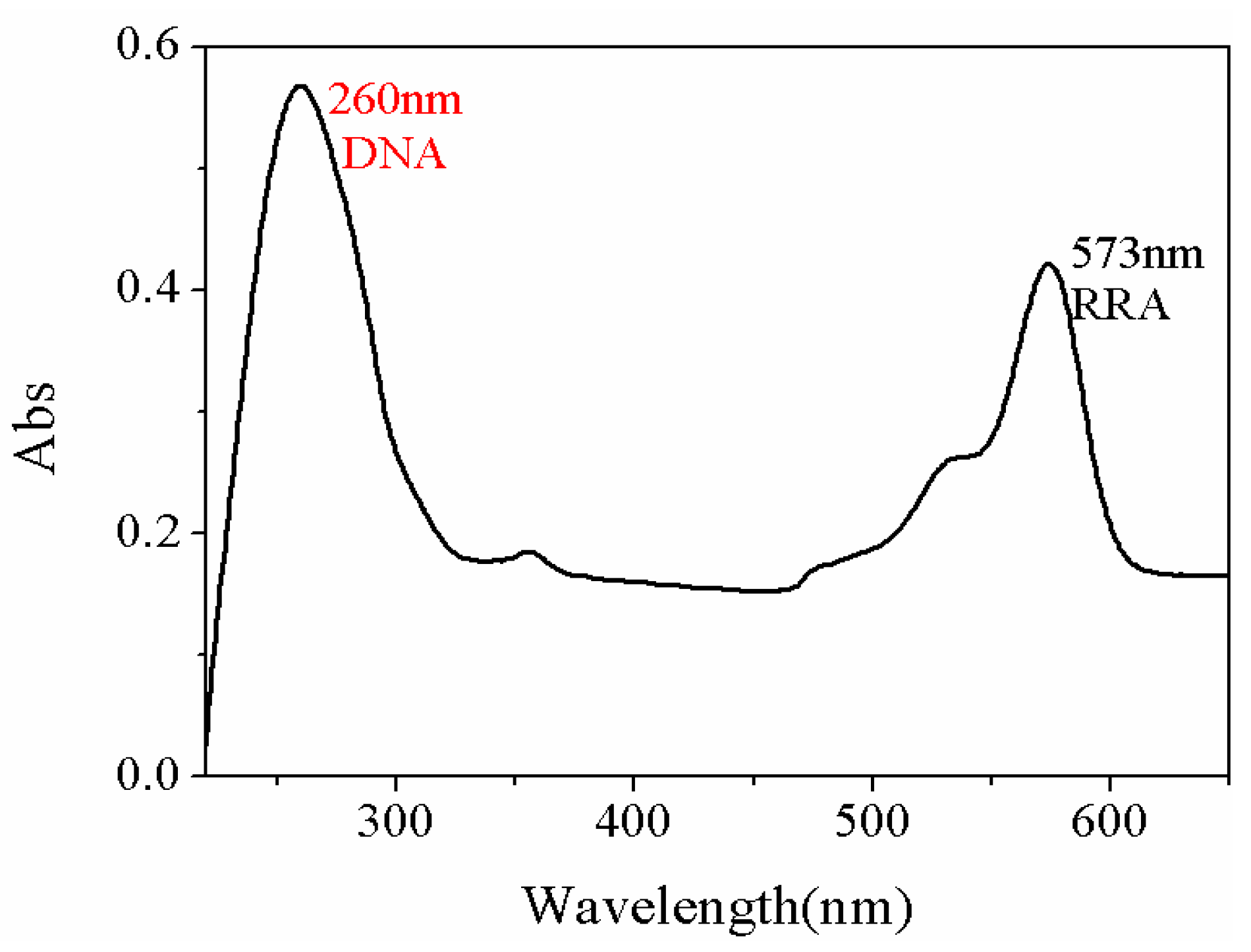 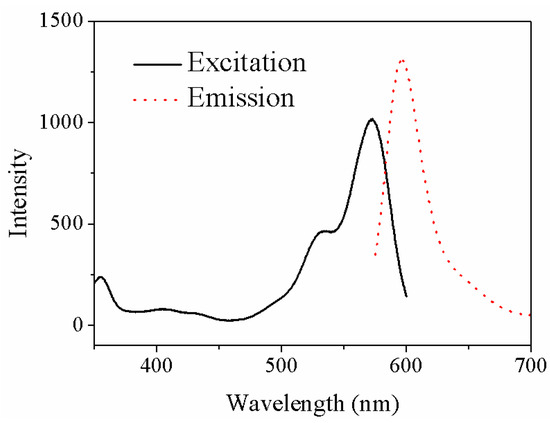 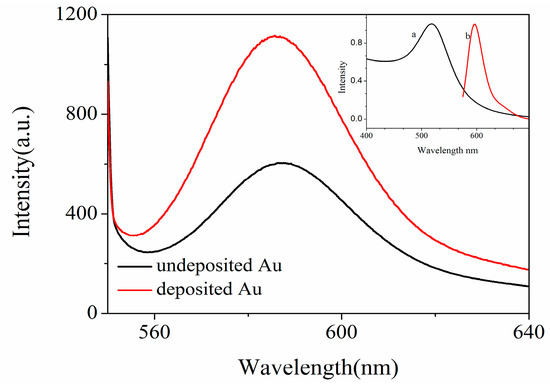 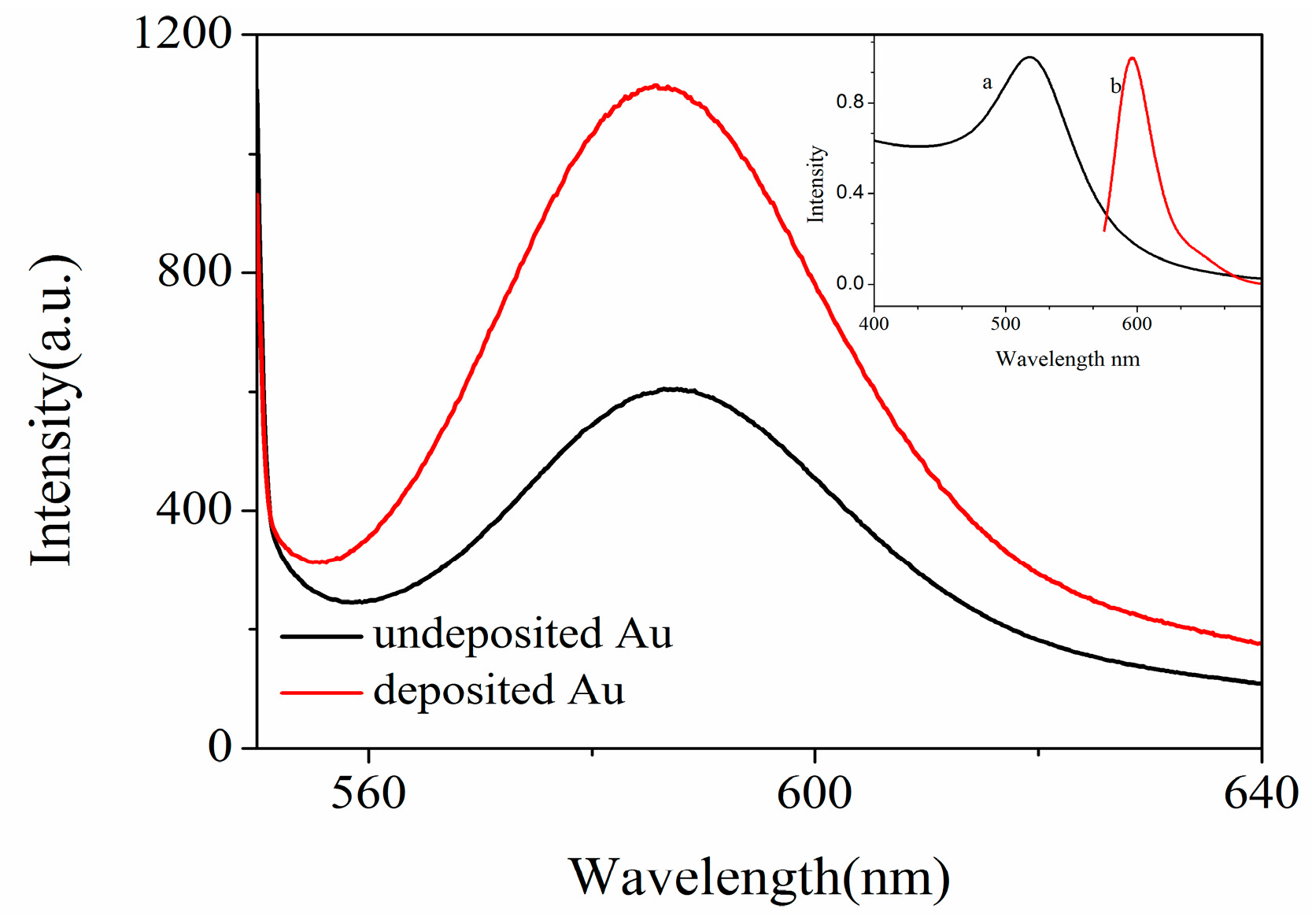 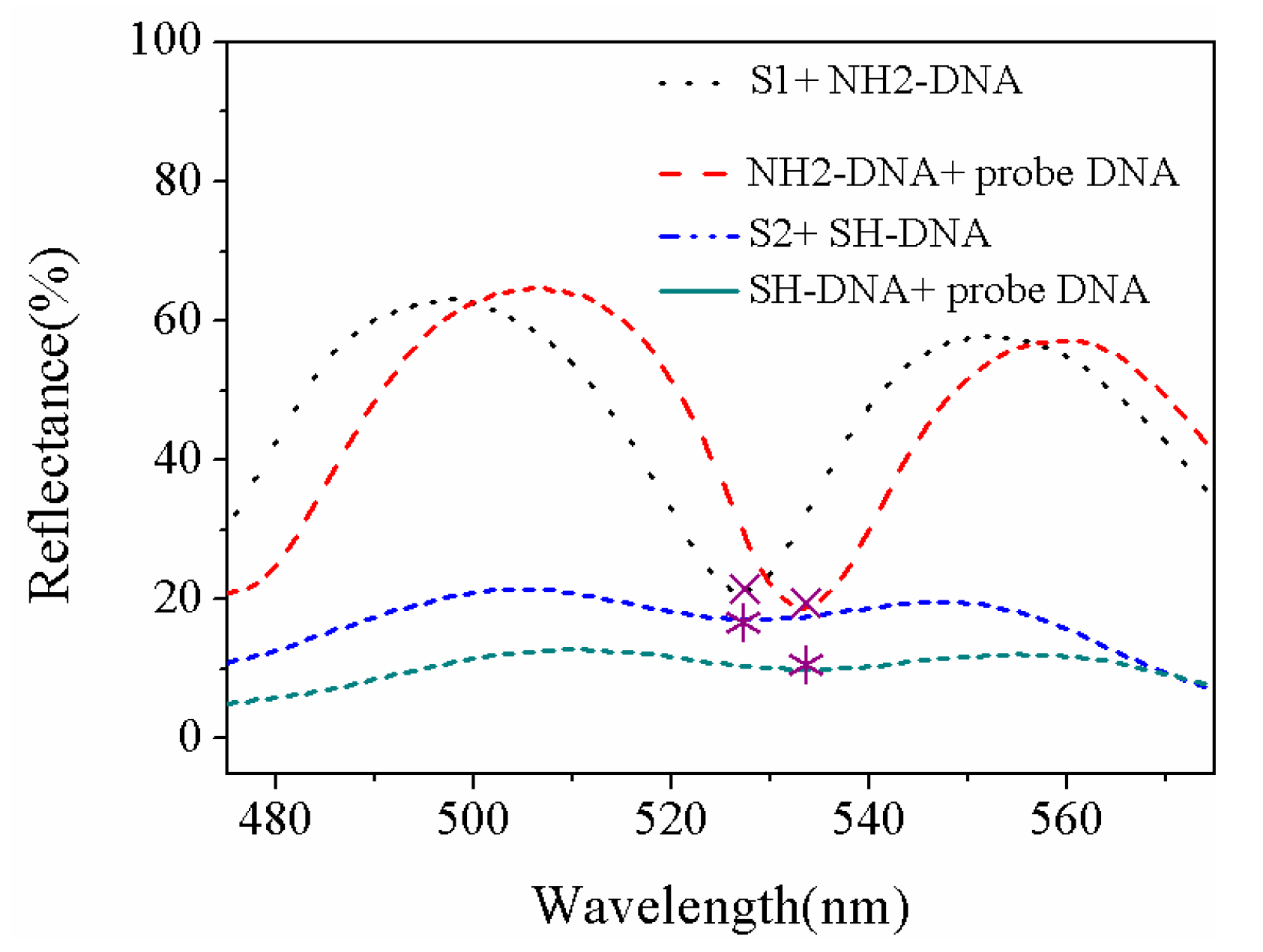 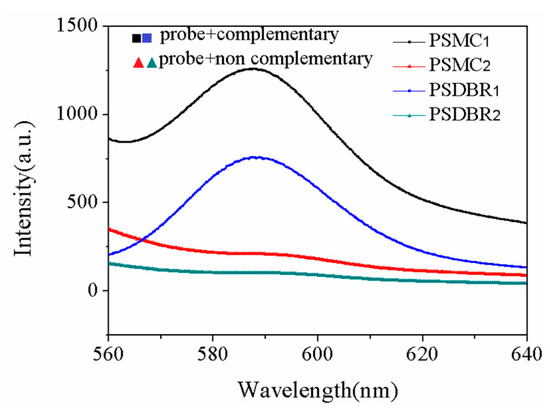 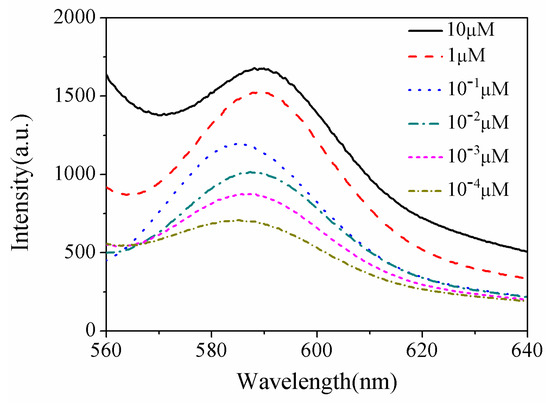 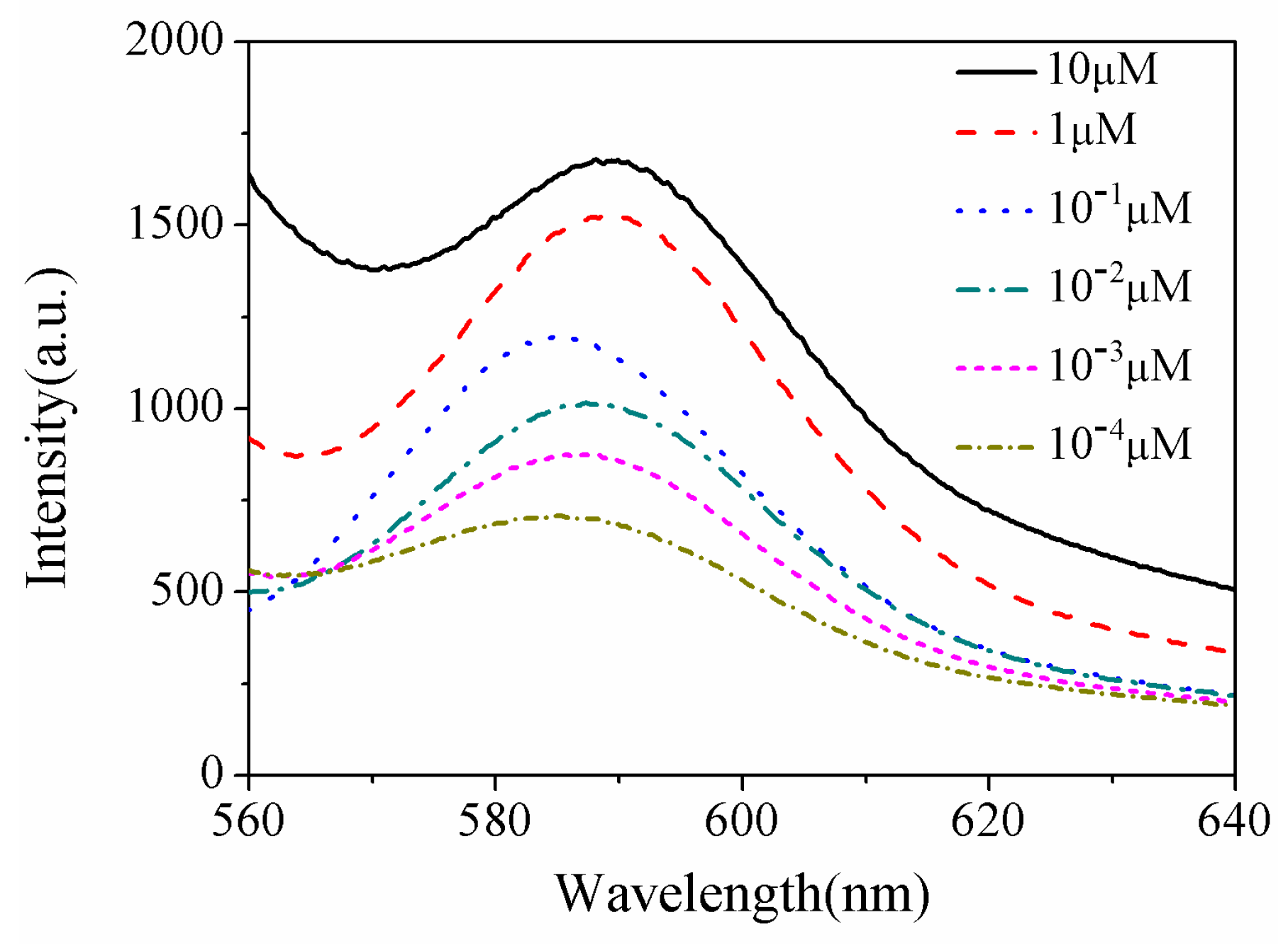 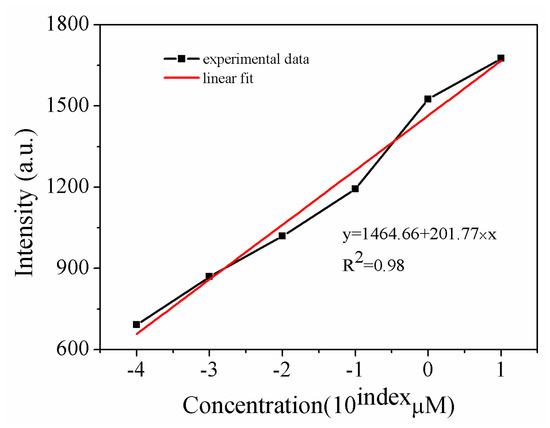 Table 2. The sequence of DNA fragment.
Table 2. The sequence of DNA fragment.
© 2018 by the authors. Licensee MDPI, Basel, Switzerland. This article is an open access article distributed under the terms and conditions of the Creative Commons Attribution (CC BY) license (http://creativecommons.org/licenses/by/4.0/).
We use cookies on our website to ensure you get the best experience. Read more about our cookies here.
Accept
We have just recently launched a new version of our website. Help us to further improve by taking part in this short 5 minute survey here. here.
Never show this again