Phononic crystals are periodic composite structures with specific resonant features that are gaining popularity in the field as liquid sensors. The introduction of a structural defect in an otherwise periodic regular arrangement can generate a resonant mode, also called defect mode, inside the characteristic band gaps of phononic crystals. The morphology, as well as the frequency in which these defect modes appear, can give useful information on the composition and properties of an analyte. Currently, only gain and frequency measurements are performed using phononic crystal sensors. Other measurements like the transient response have been implemented in resonant sensors such as quartz microbalances showing great results and proving to be a great complimentary measure to the gain and frequency measurements. In the present paper, a study of the feasibility of using the transient response as a measure to acquire additional information about the analyte is presented. Theoretical studies using the transmission line model were realized to show the impact of variations in the concentration of an analyte, in this case, lithium carbonate solutions, in the transient time of the system. Experimental realizations were also performed showing that the proposed measurement scheme presents significant changes in the resulting data, indicating the potential use of this measure in phononic crystal sensors. This proposed measure could be implemented as a stand-alone measure or as a compliment to current sensing modalities. View Full-Text
Keywords: transient response; phononic crystal sensors; resonant sensors transient response; phononic crystal sensors; resonant sensors
►▼ Show Figures 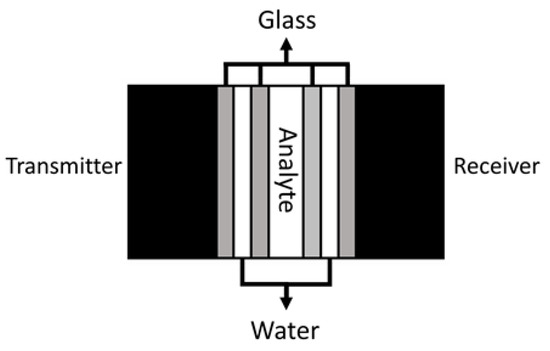