The increasing use of Internet of Things (IoT) devices in specific areas results in an interference among them and the quality of communications can be severely degraded. To deal with this interference issue, the IEEE 802.11ax standard has been established in hyper-dense wireless networking systems. The 802.11ax adopts a new candidate technology that is called multiple network allocation vector in order to mitigate the interference problem. In this paper, we point out a potential problem in multiple network allocation vector which can cause delays to communication among IoT devices in hyper-dense wireless networks. Furthermore, this paper introduces an adaptive beam alignment algorithm for interference resolution, and analyzes the potential delays of communications among IoT devices under interference conditions. Finally, we simulate our proposed algorithm in densely deployed environments and show that the interference can be mitigated and the IEEE 802.11ax-based IoT devices can utilize air interface more fairly compared to conventional IEEE 802.11 distributed coordination function. View Full-Text
Keywords: IEEE 802.11ax; multiple NAVs; Internet-of-Things (IoT); beamforming IEEE 802.11ax; multiple NAVs; Internet-of-Things (IoT); beamforming
►▼ Show Figures 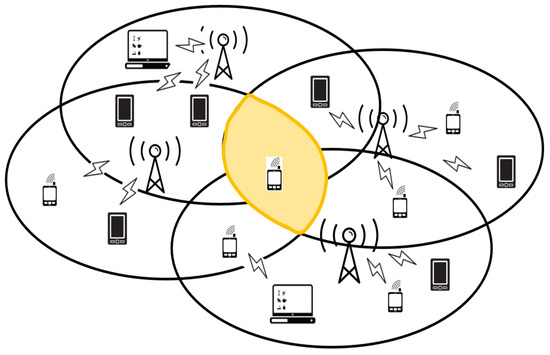