Flow sensing in hostile environments is of increasing interest for applications in the automotive, aerospace, and chemical and resource industries. There are thermal and non-thermal approaches for high-temperature flow measurement. Compared to their non-thermal counterparts, thermal flow sensors have recently attracted a great deal of interest due to the ease of fabrication, lack of moving parts and higher sensitivity. In recent years, various thermal flow sensors have been developed to operate at temperatures above 500 °C. Microelectronic technologies such as silicon-on-insulator (SOI), and complementary metal-oxide semiconductor (CMOS) have been used to make thermal flow sensors. Thermal sensors with various heating and sensing materials such as metals, semiconductors, polymers and ceramics can be selected according to the targeted working temperature. The performance of these thermal flow sensors is evaluated based on parameters such as thermal response time, flow sensitivity. The data from thermal flow sensors reviewed in this paper indicate that the sensing principle is suitable for the operation under harsh environments. Finally, the paper discusses the packaging of the sensor, which is the most important aspect of any high-temperature sensing application. Other than the conventional wire-bonding, various novel packaging techniques have been developed for high-temperature application. View Full-Text
Keywords: thermal flow; harsh environment; operational modes; transduction; materials; properties and packaging thermal flow; harsh environment; operational modes; transduction; materials; properties and packaging
►▼ Show Figures 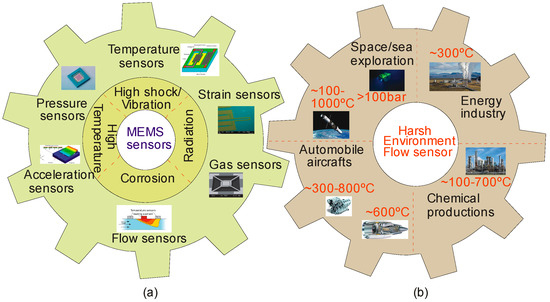