Recent Progress in Biosensors for Environmental Monitoring: A Review
Previous Article in Journal

The extensive use of Cr(VI) in many industries and the disposal of Cr(VI)-containing wastes have resulted in Cr(VI)-induced environmental contamination. Cr(VI) compounds are associated with increased cancer risks; hence, the detection of toxic Cr(VI) compounds is crucial. Various methods have been developed for Cr(VI) measurement, but they are often conducted offsite and cannot provide real-time toxicity monitoring. A microbial fuel cell (MFC) is an eco-friendly and self-sustaining device that has great potential as a biosensor for in situ Cr(VI) measurement, especially for wastewater generated from different electroplating units. In this study, Exiguobacterium aestuarii YC211, a facultatively anaerobic, Cr(VI)-reducing, salt-tolerant, and exoelectrogenic bacterium, was isolated and inoculated into an MFC to evaluate its feasibility as a Cr(VI) biosensor. The Cr(VI) removal efficiency of E. aestuarii YC211 was not affected by the surrounding environment (pH 5–9, 20–35 °C, coexisting ions, and salinity of 0–15 g/L). The maximum power density of the MFC biosensor was 98.3 ± 1.5 mW/m2 at 1500 Ω. A good linear relationship (r2 = 0.997) was observed between the Cr(VI) concentration (2.5–60 mg/L) and the voltage output. The developed MFC biosensor is a simple device that can accurately measure Cr(VI) concentrations in the actual electroplating wastewater that is generated from different electroplating units within 30 min with low deviations (−6.1% to 2.2%). After treating the actual electroplating wastewater with the MFC, the predominant family in the biofilm was found to be Bacillaceae (95.3%) and was further identified as the originally inoculated E. aestuarii YC211 by next generation sequencing (NGS). Thus, the MFC biosensor can measure Cr(VI) concentrations in situ in the effluents from different electroplating units, and it can potentially help in preventing the violation of effluent regulations. View Full-Text
Keywords: chromium; biosensor; microbial fuel cell; wastewater; green production chromium; biosensor; microbial fuel cell; wastewater; green production
►▼ Show Figures 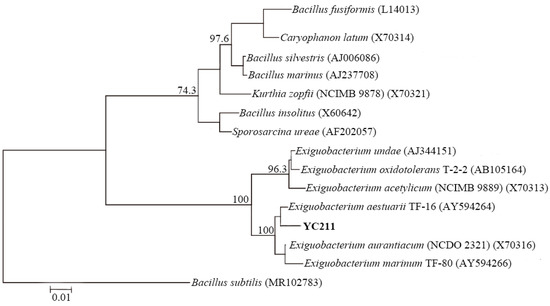