Parkinson’s disease (PD) is a progressive movement disorder caused by the death of dopamine-producing cells in the midbrain. There is a need for frequent symptom assessment, since the treatment needs to be individualized as the disease progresses. The aim of this paper was to verify and further investigate the clinimetric properties of an entropy-based method for measuring PD-related upper limb temporal irregularities during spiral drawing tasks. More specifically, properties of a temporal irregularity score (TIS) for patients at different stages of PD, and medication time points were investigated. Nineteen PD patients and 22 healthy controls performed repeated spiral drawing tasks on a smartphone. Patients performed the tests before a single levodopa dose and at specific time intervals after the dose was given. Three movement disorder specialists rated videos of the patients based on the unified PD rating scale (UPDRS) and the Dyskinesia scale. Differences in mean TIS between the groups of patients and healthy subjects were assessed. Test-retest reliability of the TIS was measured. The ability of TIS to detect changes from baseline (before medication) to later time points was investigated. Correlations between TIS and clinical rating scores were assessed. The mean TIS was significantly different between healthy subjects and patients in advanced groups (p-value = 0.02). Test-retest reliability of TIS was good with Intra-class Correlation Coefficient of 0.81. When assessing changes in relation to treatment, TIS contained some information to capture changes from Off to On and wearing off effects. However, the correlations between TIS and clinical scores (UPDRS and Dyskinesia) were weak. TIS was able to differentiate spiral drawings drawn by patients in an advanced stage from those drawn by healthy subjects, and TIS had good test-retest reliability. TIS was somewhat responsive to single-dose levodopa treatment. Since TIS is an upper limb high-frequency-based measure, it cannot be detected during clinical assessment. View Full-Text
Keywords: Parkinson’s disease; smartphone; spiral tests; temporal irregularity; timing variability; motor assessment; approximate entropy; complexity Parkinson’s disease; smartphone; spiral tests; temporal irregularity; timing variability; motor assessment; approximate entropy; complexity
►▼ Show Figures 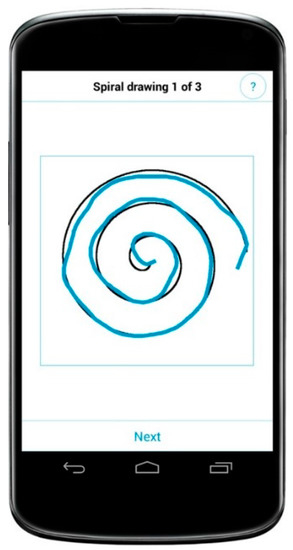