Consider a wireless network consisting of a source (S), a destination (D), two half-duplex relays ( and ) and an eavesdropper (E) as shown in Figure 1, where all nodes are equipped with a single antenna. The eavesdropper can intercept the transmission from source and relay simultaneously. and apply the decode-and-forward relaying protocol. It is assumed that the direct S-to-D channel is not available due to severe path loss and/or shadowing. Therefore, the transmission from S to D requires the assistance of and . In additional, the channel-state-information (CSI) for all channels (including the eavesdropping channels) are required for wiretap channel coding.
We assume that all channels experience block Rayleigh fading (Rayleigh fading represents the worst case scenario if compared with the case with strong line of sight and path loss. The results presented in this paper therefore represent the achievable lower bound if compared environment with strong line of sight) and remain constant over one block but vary independently from one block to another. The channel coefficient from node i to node j is denoted as and channel reciprocity is assumed, i.e., . The corresponding channel gain, are independently exponentially distributed with mean of . The noise at relays ( and ), D and E are denoted as , , and with variances of , , and , respectively. The transmit power of source and relays are P.

The transmission protocol of two-path successive relaying (TPSR) is divided into consecutive equal-duration time-slots where S transmits independent codeword continuously. The protocol is alternated by odd time-slot stage () and even time-slot stage () as shown in Figure 1.
In odd or even time-slot, the eavesdropper jointly decodes messages from the source and relay transmitter. At the same time, the relay receiver is interfered by the inter-relay interference from the transmitting relay. This is similar to the self-interference of full-duplex relay where the transmission from the transmitting antenna interferes the received signal at the receiving antenna. However, the interference mitigation technique of TPSR is simpler than the full-duplex relay since the two relays are physically distributed. The inter-relay interference can be mitigated to the noise floor when the two relays are sufficiently apart [30].
Let , , and be the received signals in time slot t at , D and E, respectively. Assume that the relays, destination and eavesdropper can always decode the data. The received signals are where is the reciprocal inter-relay channel coefficient.

In this section, we review the achievable secrecy rate of half-duplex, full-duplex and full-duplex jamming secrecy network in [27].

Half-duplex relaying (HDR) is a conventional relay scheme with a half-duplex relay, R. In the HDR scheme, S transmits to R in time-slot t and R forwards to D in subsequent time-slot. During the transmission, E receives twice, from S and R at time slot t and , respectively.
The data transmission rate for HDR is
On the other hand, the eavesdropping rate can be obtained as
Then, the achievable secrecy rate of HDR is given by

The system model of full-duplex secrecy relay network in [27] is similar to the half-duplex secrecy relay network, except now the relay has two antennas for simultaneous receiving and transmission respectively, i.e., full-duplex relay, FR. With the two antennas, FR can receive from S and forward the previously decoded to D simultaneously at time slot t. Therefore, S and D can transmit and receive continuously. However, when FR is receiving from S, it is interfered by its own transmission known as self-interference.
The data transmission rate and eavesdropping rate for full-duplex relaying (FDR) are two times of Equations (6) and (7) respectively and is the self-interference channel coefficient of FR. Then, the achievable secrecy rate of FDR is given by
Based on the intercept probability analysis in Section 3, the interception probability of FDR is the same as the intercept probability of or assisted link in TPSR as follows (see Equation (10))

The full-duplex jamming (FDJ) network is proposed in [27]. During time slot t, S transmits to FR and FR receives and decodes from S while transmitting a jamming signal to E. During time slot , FR forwards previously decoded to D and switches off its receiving antenna. At the same time, S transmits jamming signal to E.
The data transmission rate for FDJ is given in Equation (6) and is the self-interference channel coefficient of FR. On the other hand, the eavesdropping rate for FDJ is given by Then, the achievable secrecy rate of FDJ can be obtained as

In this paper, two-path successive relaying (TPSR) is proposed to improve the security of wireless transmission. We compare the ergodic achievable secrecy rate, interception probability and secrecy outage probability of the proposed TPSR against the existing half-duplex relaying (HDR), full-duplex relaying (FDR) and full-duplex jamming (FDJ). The numerical results reveal that the proposed TPSR achieves the same ergodic achievable secrecy rate as the FDR. The TPSR also delivers the lowest probability of interception and secrecy outage compared to the other schemes due to the full-duplex bandwidth efficiency and the two mutually independent links assisted by relay pair and . The intercept probabilities of TPSR and FDR are analyzed and verified with simulation. The analysis shows that the intercept probability of TPSR is quadratically lower than the intercept probability of FDR. The numerical results show the TPSR has the lowest probability of interception compared to all other schemes when the inter-relay interference, . In terms of secrecy outage probability, the FDR and FDJ demand lower interference level compared to the TPSR in order to outperform the HDR. In short, with the proposed TPSR protocol, a secured wireless transmission can be achieved by using conventional half-duplex relays without employing sophisticated jamming and/or interference cancellation techniques. 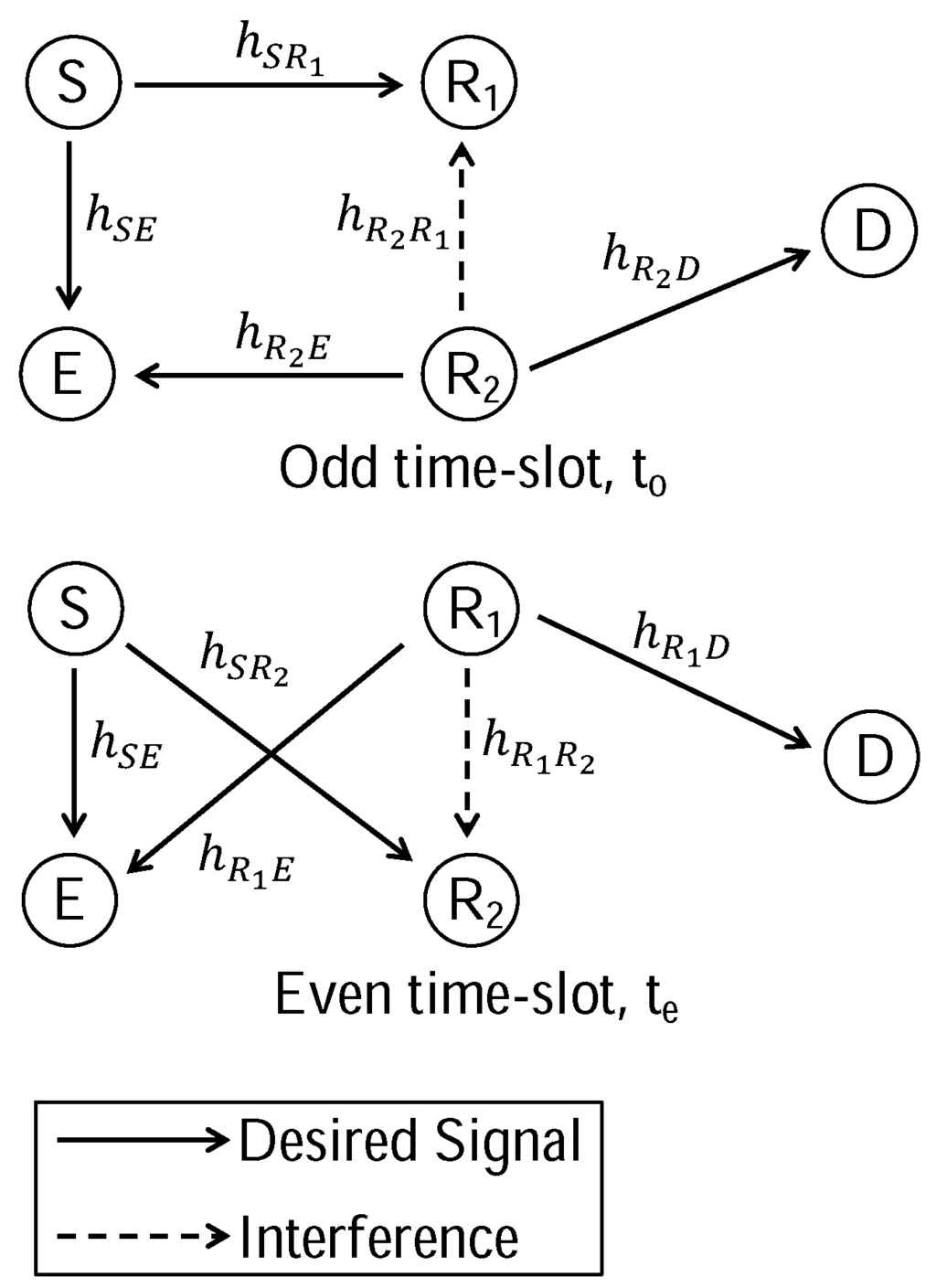 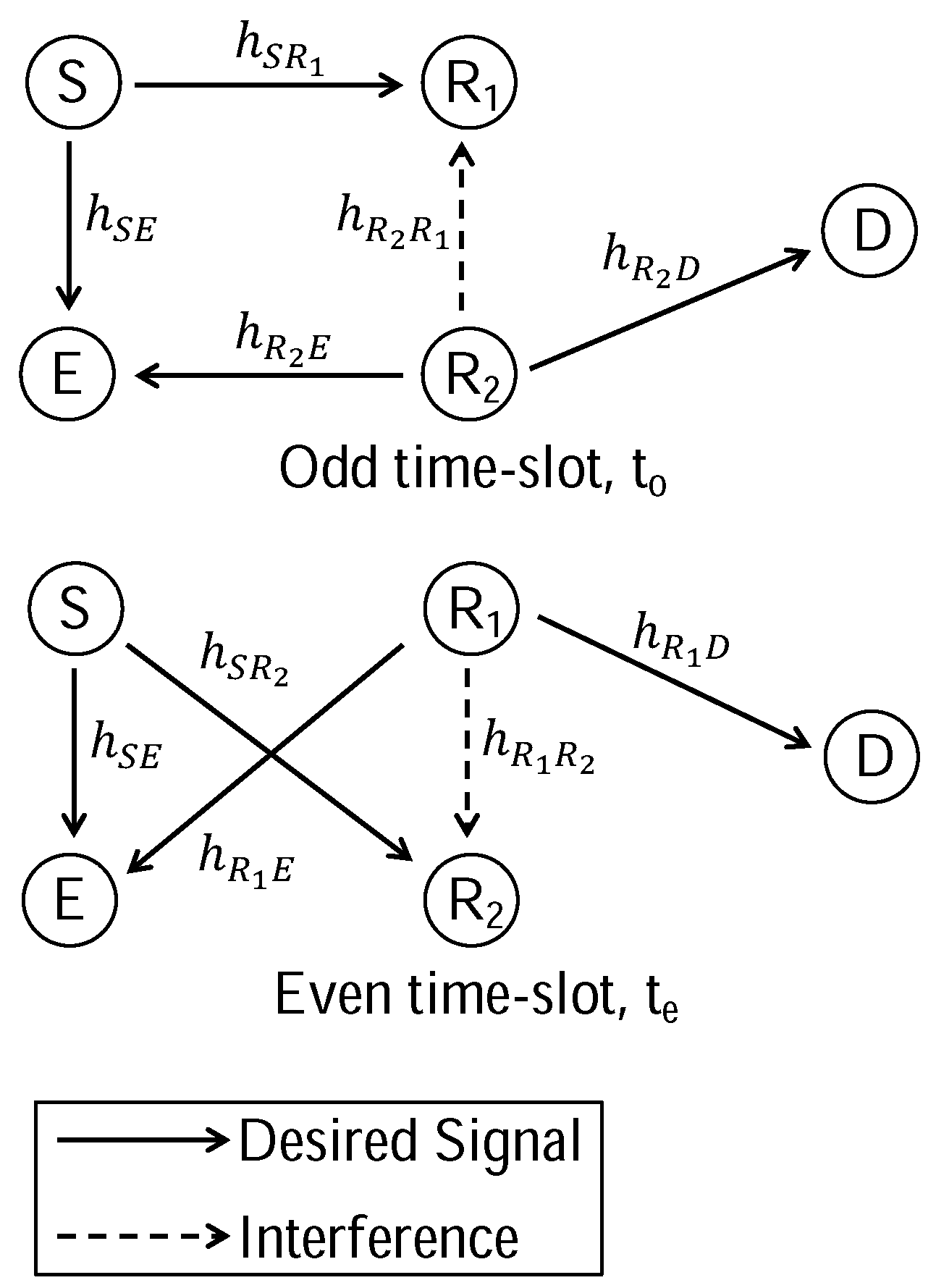 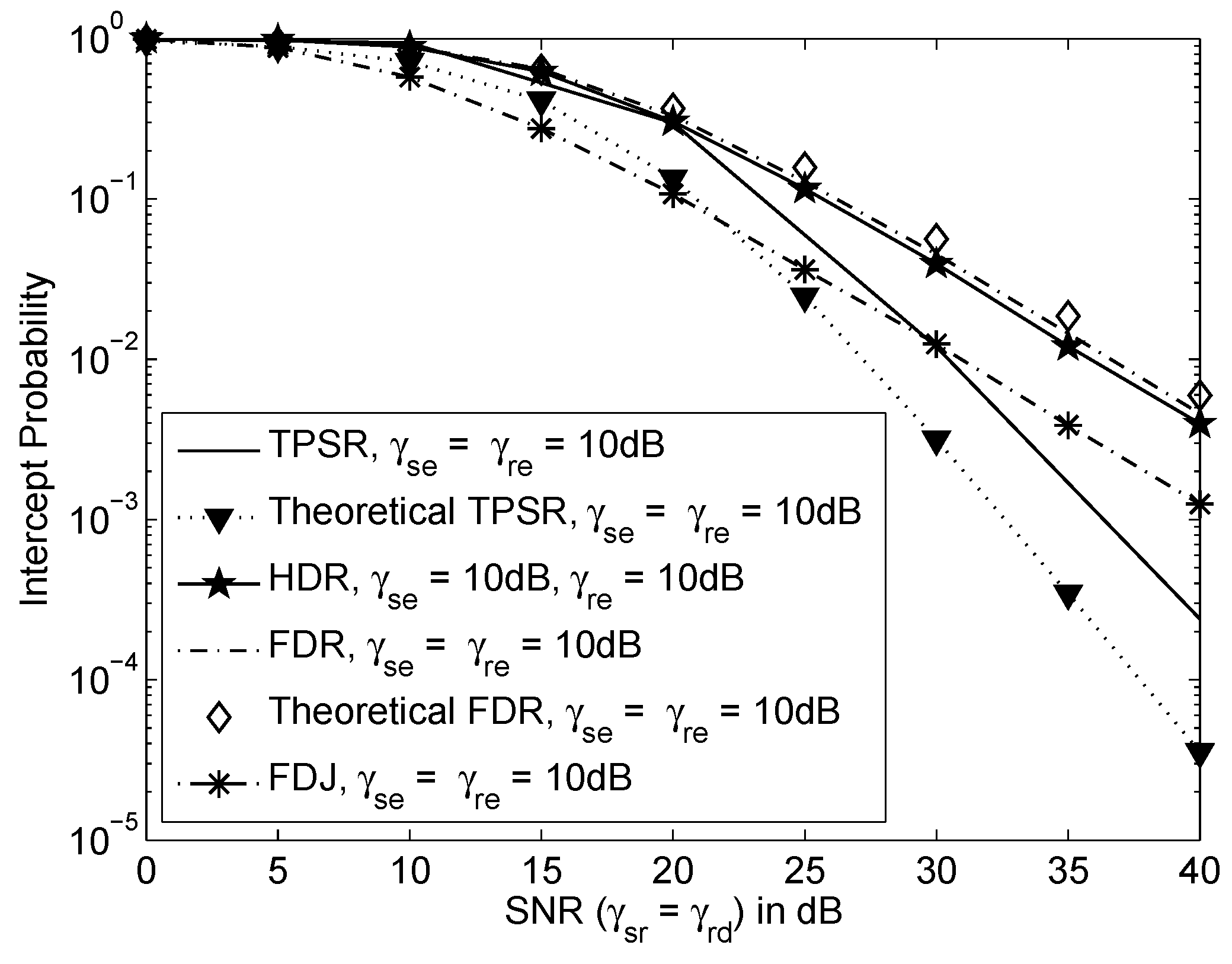 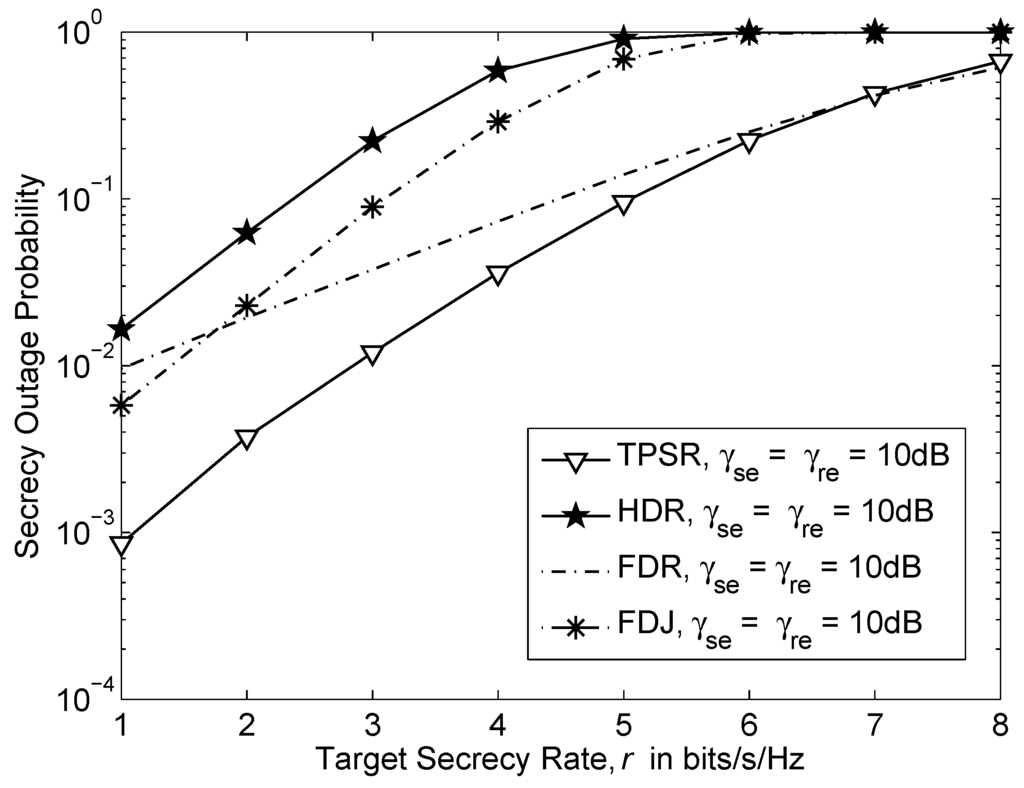 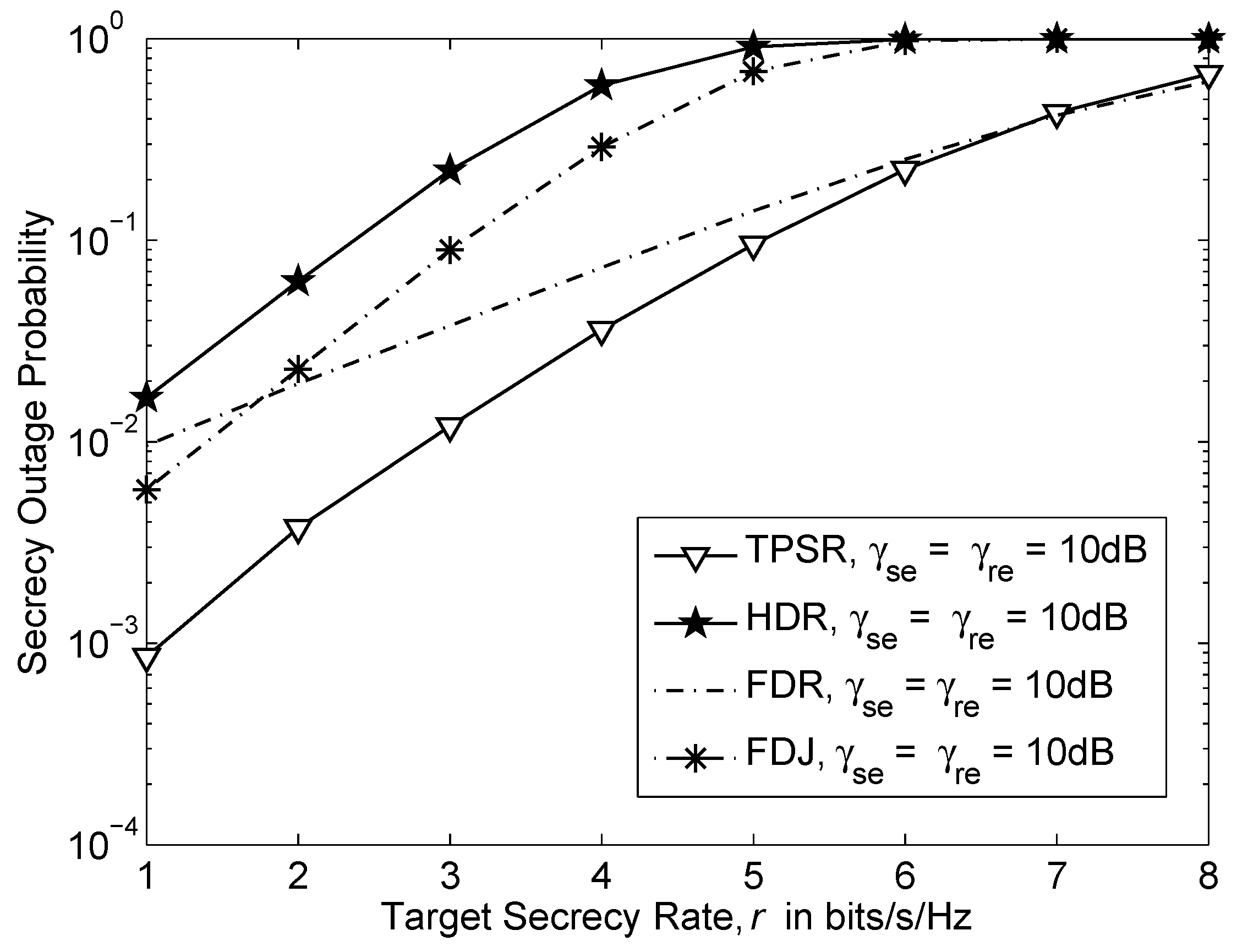 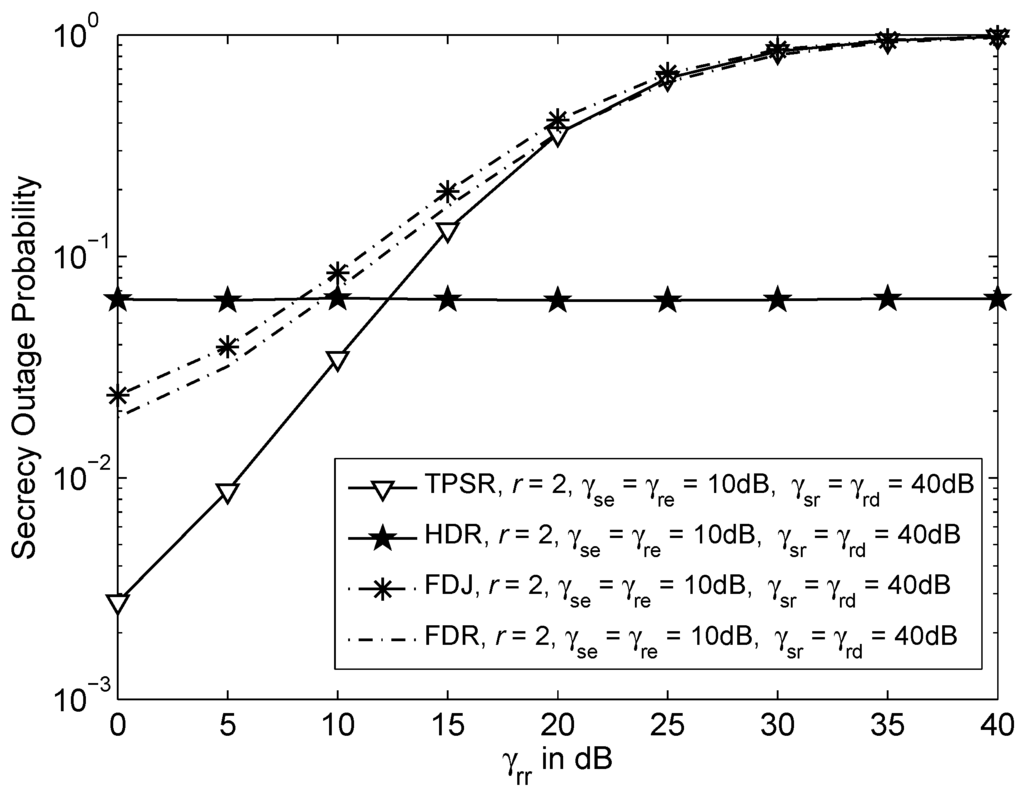