There are many historic buildings whose construction is based on timber frame walls. Most buildings built during the nineteenth and early twentieth centuries were based on timber frame walls with vertical support elements. These timber frame elements are affected by their moisture content and by the passage of time. If the interaction of the timber frame walls with hygrothermal fluctuations were known, the maintenance of these buildings could be improved significantly. To determine the moisture content of wood there are two types of meters on the market: on the one hand, capacitance meters which consist of two side ends and where the moisture content is measured locally between two peaks. On the other hand, there are meters based on the variation of electromagnetic transmittance of timber, which depends on the moisture of timber. The second ones are very expensive and difficult to handle. This work presents a new non-intrusive capacitive sensor that measures the global moisture content in a section of the timber frame walls and therefore its accuracy is similar to the accuracy that can be obtained with electromagnetic transmittance meters. Additionally, as it is a capacitive sensor, it is low cost and easy to operate.
Keywords: capacitive sensor; moisture; wood; non-intrusive; restoration; building capacitive sensor; moisture; wood; non-intrusive; restoration; building

The sensor consists of two parallel rectangular copper sheets, whose dimensions adjust themselves to wood dimensions, and attached to a rigid support which allows one to keep the sheets in a parallel orientation under all circumstances.
This method is a capacitive method and it is based on the principle of electric field measurement. The measured field is the one that forms between the capacitor plates and the material which acts as a dielectric. The resulting changes in the dielectric constant cause a variation in the electric capacitance value of the device, and as a result, the detected impedance varies with moisture. The capacitance C of a capacitor with parallel plane plates is determined by Equation (1): where ε is the dielectric permittivity; A, the area of one of the capacitor plates; and d, the distance between plates. During measurements, if values of A and d are set, the capacitance of the device connected to the measurement circuit will vary with the permittivity of the material, and the permittivity of the material in turn will vary with its moisture content. Figure 1 shows a block diagram of our device.
The device consists of an auto-oscillating circuit with a resonance frequency and a demodulator that gives the change of this frequency (Figure 1). This resonant frequency (ω) is directly related to the capacitance (C) of the sensor and inductance (L) (Equation (2)):
Therefore it is possible to correlate the capacitance value with the water content in wood. Figure 2 shows the device with the wood sample.

The wood samples were from Pinus sylvestris L. and they came from two sources. Some of them are part of a beam from a building under restoration and others were part of fresh wood beams. They have a 16 × 16 cm2 section and 25 cm stretches are cut for the execution of the experiment. This length is enough for the sensor sheets used and it is not too big to facilitate its use and/or handling in the laboratory. Thus, the measured samples have dimensions of 25 × 16 × 16 cm3. These samples were dried to their anhydrous state according to the EN 13183-1:2002 standard by oplacin them in a Contem SELECTA electric oven (Selecta Products, INC, Tehachapi, CA, USA). They were kept there for 30 days and weighed daily (following the standard procedure) till the weight variation in consecutive weighings was less than 0.1%. After conditioning, the wood samples were moistened in a controlled way till they thoroughly exceeded the FSP. Afterwards, the wood samples were kept under ambient environmental conditions and the moisture measurements were conducted daily. The wood samples were dried in these conditions until the amount of water in the samples was in equilibrium with the environmental conditions. When the wood samples reached this point, moisture measurements were then conducted while the wood samples were being dried in the electric oven until they recovered the anhydrous state.

Once the FSP was exceeded, measurements were started. The procedure followed was to weigh the wood samples to calculate their moisture content by comparison with their dry weight according to the EN 13183-1:2002 standard (Equation (3)): where m1 stands for the mass of the sample and m0 is the mass of the sample in anhydrous state. Then, the answer obtained by our sensor was measured. The measurements were conducted in a room at constant temperature to avoid any possible influence of temperature both on the electronic measurement and on the wood itself. For every sample of wood and moisture content, 20 measurements were conducted, so that it has been possible for us to apply statistical techniques to the obtained results to minimise errors.

3.1. Capacitance in Relation to Wood Moisture

3.1.1. Capacitance in Relation to Moisture of Wood Samples from a Building under Restoration

Measurements of the wood sample from a building under restoration are shown in Figure 3. In this figure, it can be observed that capacitance variation in relation to wood moisture follows a parabolic behaviour according to Equation (4), which was obtained by processing the data in a spreadsheet and fitting the curve to the data. As expected, given that the elative permittivity (εr = ε/ε0) of water is 80 and in the case of pine wood it is around 2 for its anhydrous state [28], the capacitance increases as the moisture content of the sample grows:
The correlation coefficient in Figure 3 is 0.992, which indicates that the experimentally measured points fit the proposed behaviour law in a really good way.

3.1.2. Capacitance in Relation to Moisture of a Fresh Wood Sample

3.2. Relationship between Capacitance and Moisture

The dielectric properties of wood increase with the growth of moisture content in a non-linear way [30]. This explains why in Figure 3 and Figure 4, the capacitance increased with the moisture content in a parabolic way. From the parabolic behaviour, it is deduced that, when we increase wood moisture at high concentrations of moisture by one percentage point, the capacitance grows more than when that same increase is applied at low moisture concentrations.
As it can be seen in the results (Figure 3), our system has a better measurement range than the commercial device. Specifically, this sensor has a range of up to 65% moisture in wood, while the capacitive and resistive sensor used in [17] has a measuring range of up to 50% and 30% moisture respectively. For example, the FH A636-MF resistive sensor has a measurement range from 7% to 30% for moisture in wood, and the distance between electrodes is just 7 mm. In addition, it should not be forgotten that a related problem with the use of resistive method is that effects of chemical composition and density cannot be quantified for each type of building material because accurate correction tables are not available for each type of material. Furthermore, for materials with high salt content, and due to the high conductivity of salt, the value measured by the sensor will not reflect the real moisture content. Thus, this method is not reliable for buildings near the coastline.
The limitation of our measurement range is determined by the method used in the measurements. We have not used a system that allows taking these measurements without a wood moisture decrease due to the room temperature, just as it would happen in situ in a building. If we had limited our work to measurements taken in the laboratory, we could have avoided evaporation and probably we could have obtained measurements with nearly 100% moisture.
The capacitive sensor uses the dielectric properties of wood to measure the moisture in the material by altering the capacitance. As the dielectric permittivity of dry wood is around 2 for its anhydrous state [28], for a given wood the dielectric constant depends on the quantity of water it contains. The dielectric constant is also a function of the wood density and species, thus, by previously calibrating the sensor by the oven drying method described in Section 2.3, our device can be used for any type of wood.

Capacitance measurements as an indirect method to know the total moisture content of a wooden beam section produced parabolic behaviour responses both in the case of a wood sample from a building under restoration and in the case of a fresh wood sample. The capacitance increased as the water percentage in the wood increased, and in a bigger proportion at high contents of moisture than at low contents. A parabolic behaviour law has been established between sensor response (transducer capacitance) and the percentage of moisture content in wood.
The obtained coefficients of correlation are very high, although in the fresh wood sample this coefficient is a little lower than in the wood sample from a building under restoration. This difference could be due to the anisotropic character of wood together with the higher resin content of the fresh wood sample. Also, any changes in chemical composition occurring in the wood may have influenced the results.
In addition, the system is simple and versatile enough to be utilised to measure and continuously monitor the moisture content together with an automatic data acquisition system in wooden beams and foundations, which can be very important in ancient cities of cultural value like Venice or Amsterdam, where the moisture is very high.

This work has been supported by Universidad Politécnica de Madrid and PROIESCON Company. 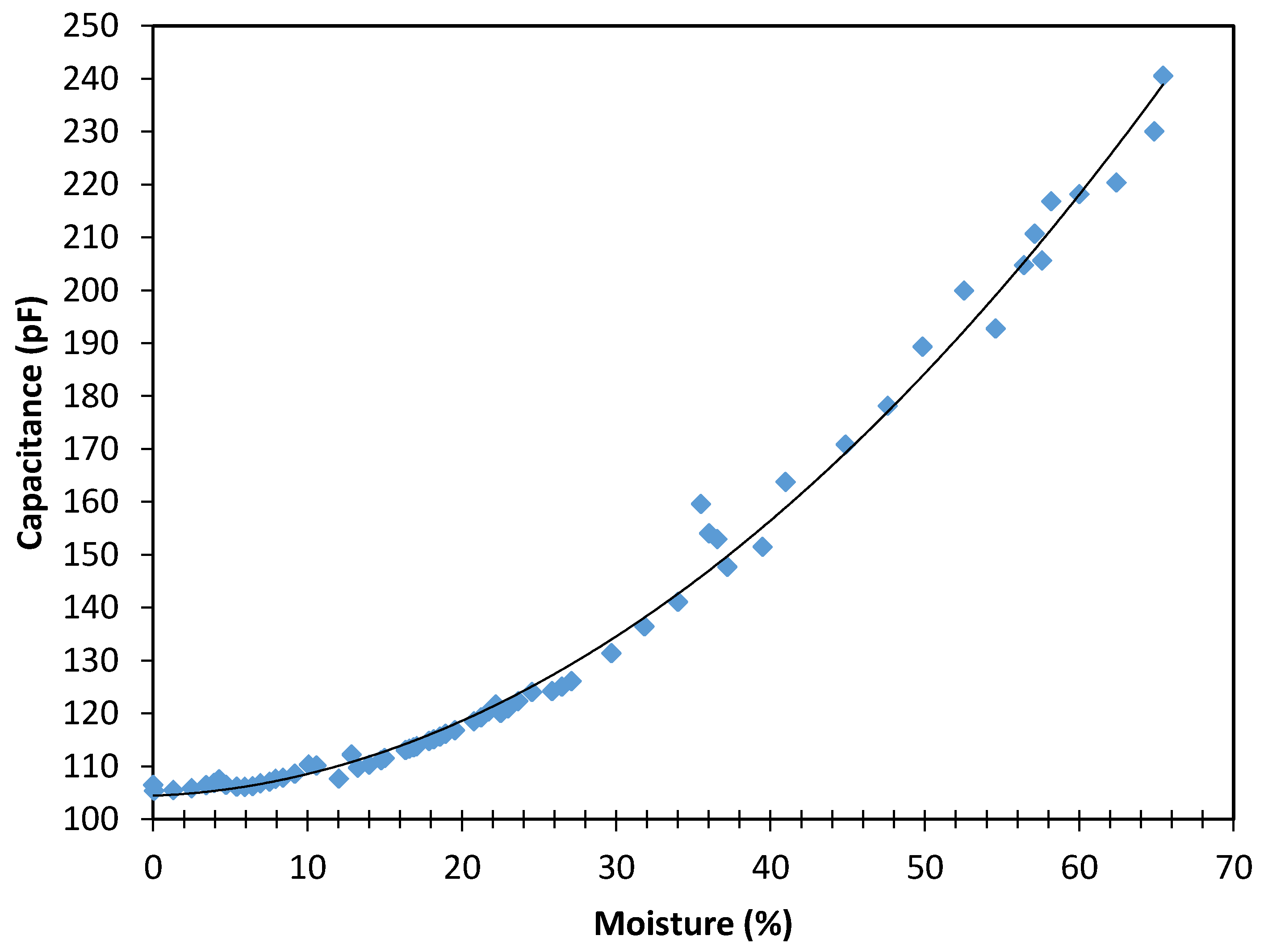 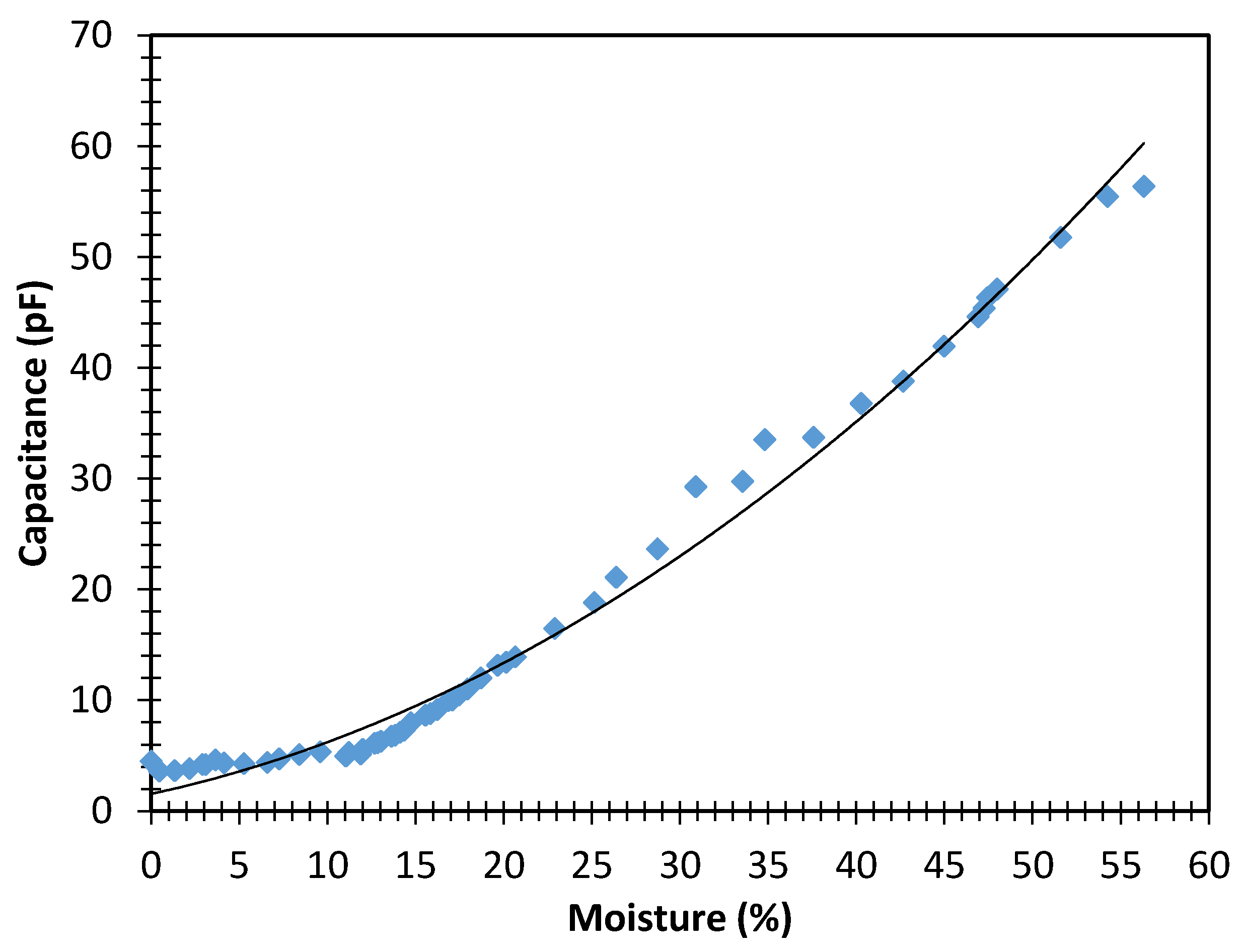