Fabrication of ZnO Nanowires Arrays by Anodization and High-Vacuum Die Casting Technique, and Their Piezoelectric Properties
Previous Article in Journal

RheoStim: Development of an Adaptive Multi-Sensor to Prevent Venous Stasis

Real-time detection of contact states, such as stick-slip interaction between a robot and an object on its end effector, is crucial for the robot to grasp and manipulate the object steadily. This paper presents a novel tactile sensor based on electromagnetic induction and its application on stick-slip interaction. An equivalent cantilever-beam model of the tactile sensor was built and capable of constructing the relationship between the sensor output and the friction applied on the sensor. With the tactile sensor, a new method to detect stick-slip interaction on the contact surface between the object and the sensor is proposed based on the characteristics of friction change. Furthermore, a prototype was developed for a typical application, stable wafer transferring on a wafer transfer robot, by considering the spatial magnetic field distribution and the sensor size according to the requirements of wafer transfer. The experimental results validate the sensing mechanism of the tactile sensor and verify its feasibility of detecting stick-slip on the contact surface between the wafer and the sensor. The sensing mechanism also provides a new approach to detect the contact state on the soft-rigid surface in other robot-environment interaction systems. View Full-Text
Keywords: tactile sensor; electromagnetic induction; stick-slip detection; end effector; wafer transfer robot tactile sensor; electromagnetic induction; stick-slip detection; end effector; wafer transfer robot
►▼ Show Figures 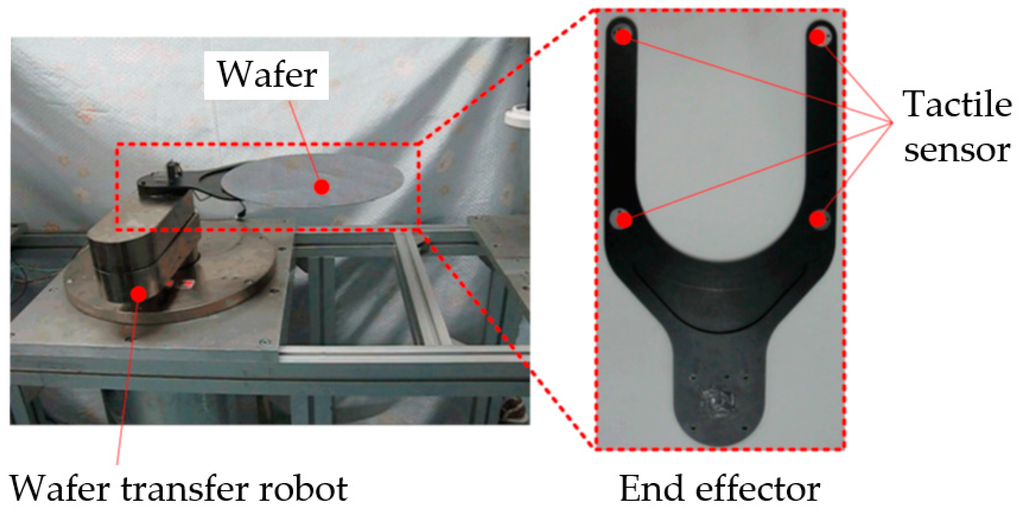