Control of oxygen over cell cultures in vitro is a topic of considerable interest, as chronic and cyclic hypoxia can alter cell behaviour. Both static and transient hypoxic levels have been found to affect tumour cell behaviour; it is potentially valuable to include these effects in early, in vitro stages of drug screening. A barrier to their inclusion is that rates of transient hypoxia can be a few cycles/hour, which is difficult to reproduce in traditional in vitro cell culture environments due to long diffusion distances from control gases to the cells. We use a gas-permeable three-layer microfluidic device to achieve spatial and temporal oxygen control with biologically-relevant switching times. We measure the oxygen profiles with integrated, ratiometric optical oxygen sensors, demonstrate sensor and system stability over multi-day experiments, and characterize a pre-bleaching process to improve sensor stability. We show, with both finite-element modelling and experimental data, excellent control over the oxygen levels by the device, independent of fluid flow rate and oxygenation for the operating flow regime. We measure equilibration times of approximately 10 min, generate complex, time-varying oxygen profiles, and study the effects of oxygenated media flow rates on the measured oxygen levels. This device could form a useful tool for future long-term studies of cell behaviour under hypoxia. View Full-Text
Keywords: spatiotemporal microfluidic oxygen control; optical oxygen sensors; transient/cyclic hypoxia spatiotemporal microfluidic oxygen control; optical oxygen sensors; transient/cyclic hypoxia
►▼ Show Figures 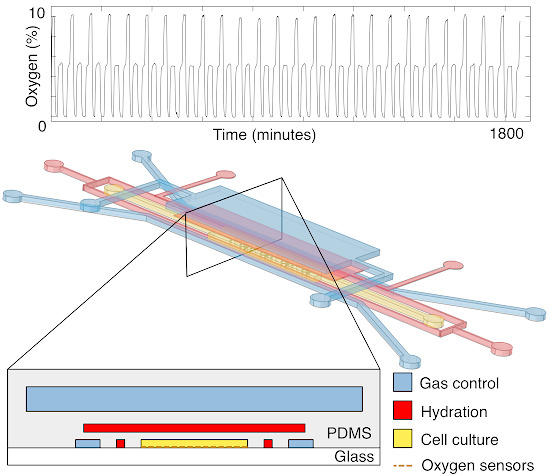