In this paper, a Per-Hop Acknowledgement (PHACK)-based scheme is proposed for each packet transmission to detect selective forwarding attacks. In our scheme, the sink and each node along the forwarding path generate an acknowledgement (ACK) message for each received packet to confirm the normal packet transmission. The scheme, in which each ACK is returned to the source node along a different routing path, can significantly increase the resilience against attacks because it prevents an attacker from compromising nodes in the return routing path, which can otherwise interrupt the return of nodes’ ACK packets. For this case, the PHACK scheme also has better potential to detect abnormal packet loss and identify suspect nodes as well as better resilience against attacks. Another pivotal issue is the network lifetime of the PHACK scheme, as it generates more acknowledgements than previous ACK-based schemes. We demonstrate that the network lifetime of the PHACK scheme is not lower than that of other ACK-based schemes because the scheme just increases the energy consumption in non-hotspot areas and does not increase the energy consumption in hotspot areas. Moreover, the PHACK scheme greatly simplifies the protocol and is easy to implement. Both theoretical and simulation results are given to demonstrate the effectiveness of the proposed scheme in terms of high detection probability and the ability to identify suspect nodes. View Full-Text
Keywords: wireless sensor networks; selective forwarding attack; malicious node; network lifetime wireless sensor networks; selective forwarding attack; malicious node; network lifetime
►▼ Show Figures 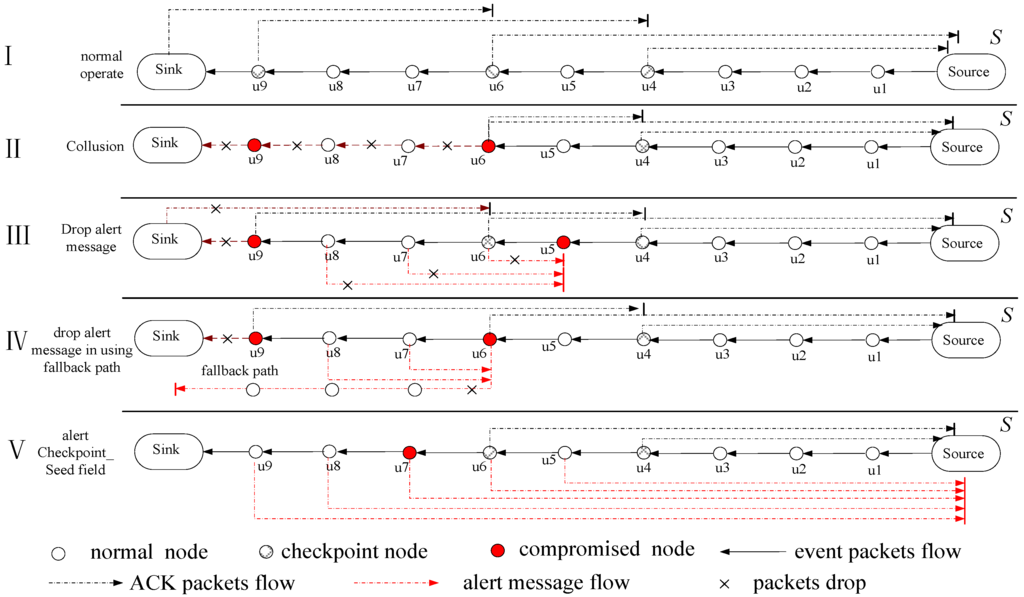