UAVs and other low-altitude remote sensing platforms are proving very useful tools for remote sensing of river systems. Currently consumer grade cameras are still the most commonly used sensors for this purpose. In particular, progress is being made to obtain river bathymetry from the optical image data collected with such cameras, using the strong attenuation of light in water. No studies have yet applied this method to map submergence depth of aquatic vegetation, which has rather different reflectance characteristics from river bed substrate. This study therefore looked at the possibilities to use the optical image data to map submerged aquatic vegetation (SAV) depth in shallow clear water streams. We first applied the Optimal Band Ratio Analysis method (OBRA) of Legleiter et al. (2009) to a dataset of spectral signatures from three macrophyte species in a clear water stream. The results showed that for each species the ratio of certain wavelengths were strongly associated with depth. A combined assessment of all species resulted in equally strong associations, indicating that the effect of spectral variation in vegetation is subsidiary to spectral variation due to depth changes. Strongest associations (R2-values ranging from 0.67 to 0.90 for different species) were found for combinations including one band in the near infrared (NIR) region between 825 and 925 nm and one band in the visible light region. Currently data of both high spatial and spectral resolution is not commonly available to apply the OBRA results directly to image data for SAV depth mapping. Instead a novel, low-cost data acquisition method was used to obtain six-band high spatial resolution image composites using a NIR sensitive DSLR camera. A field dataset of SAV submergence depths was used to develop regression models for the mapping of submergence depth from image pixel values. Band (combinations) providing the best performing models (R2-values up to 0.77) corresponded with the OBRA findings. A 10% error was achieved under sub-optimal data collection conditions, which indicates that the method could be suitable for many SAV mapping applications. View Full-Text
Keywords: submerged aquatic vegetation; macrophytes; fluvial; remote sensing; submergence depth; bathymetry; OBRA submerged aquatic vegetation; macrophytes; fluvial; remote sensing; submergence depth; bathymetry; OBRA
►▼ Show Figures 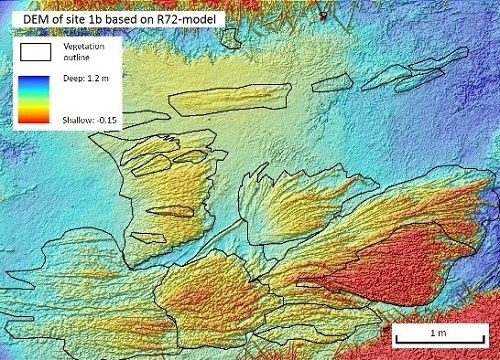