In low power wireless sensor networks, sensor nodes are widely deployed in various different environments to collect data. Because these nodes usually operate on limited battery power, energy efficiency is an important factor in protocol design. Each node communicates using a low power wireless link and its link quality varies significantly due to environmental dynamics. Packet loss is even more severe in harsh environments. Therefore, while maintaining good link quality with its neighbors, we need to reduce energy consumption for data transmission to extend the network lifetime.

In a Local Mean Algorithm (LMA) [5], a reference node broadcasts the “LifeMsg” message. The neighbor nodes transmit the “LifeAckMsg” after they receive “LifeMsg”. Reference nodes count the number of “LifeAckMsgs” and the transmission power is controlled by maintaining appropriate connectivity. For example, if the number of “LifeAckMsgs” is less than “NodeMinThresh,” the transmission power is increased. In contrast, if the number of “LifeAckMsgs” is more than “NodeMaxThresh,” the transmission power is decreased. As a result, they can provide improvement of network lifetime in a sufficiently connected network. However, LMA only guarantees connectivity between the nodes, but cannot estimate link quality [6–8]. Reliability eventually reduces due to the possibility of choosing a lossy link that affects irregular packet reception [9].

The Local Information No Topology/Local Information Link-state Topology (LINT/LILT) and Dynamic Transmission Power Control (DTPC) use the Received Signal Strength Indicator (RSSI). The nodes exceeding the RSSI threshold are regarded as the neighbor nodes with reliable links [10,11]. Transmission power can be controlled by a given Packet Reception Ratio (PRR) metric. Reducing the unnecessary control packet through blacklisting is also proposed [12]. While the PRR metric allows one to make more precise estimates, doing so requires several samplings, which decrease the agility of link quality estimation.

RSSI is inversely proportional to temperature and can differ by up to 8 dBm when the temperature changes from 25 °C to 65 °C. In other words, the RSSI threshold that satisfies the required PRR can change by up to 8 dBm. The Adaptive Transmission Power Control (ATPC) adjusts the transmission power dynamically according to spatial and temporal effects. This scheme tries to adapt the link quality that changes over time by using closed-loop feedback [7]. However, in large-scale wireless sensor networks, it is difficult to support scalability due to the serious overhead required to adjust the transmission power of each link.

Existing approaches estimate a variety of link quality indicators by periodically broadcasting a beacon. In addition, the feedback process is repeated for adaptively controlling transmission power. In adapting the link quality to the environments such as temperature variation, the packet overhead for transmission power control should be minimized. Reducing the number of control packets while maintaining reliability is an important technical issue.

To analyze the change of link quality according to the temperature variation, we measured the RSSI in an indoor environment in which the temperature varied from 29 to 35 °C. Figure 1(a) shows the layout of the experimental environment. Our experiment is performed in an empty office to minimize effects on link quality variation from sources other than the temperature. We use TELOSB motes with CC2420 radio chips [13]. The TELOSB mote has a 12-bit resolution SHT11 temperature sensor and an integrated PCB antenna. In the experiment, the transmission power is set to 0 dBm that is the maximum value of CC2420. The packet rate is one packet per 5 seconds. Figure 1(b) shows the distribution of the daytime peak temperature in Figure 1(a).

As shown in Figure 3, we measured the RSSI between a sink node and six neighbor nodes and temperature at each node. Figure 3 shows that Node 4 reaches the highest temperature and has accordingly the lowest RSSI. Even though Nodes 2 and 3 are far away from the sink node, their RSSIs are higher than that of Node 4. By this experimental result, we confirm that the temperature is a very important factor to the RSSI value, that is, the link quality.

4.1. Combining the Open-Loop and Closed-Loop Feedback

Before we present the block diagram for the proposed scheme, several variables are defined as follows:

where Pout is the output power of CC2420 and Plevel is the corresponding power level.

Based on Equations (1,2), we can obtain the appropriate power level of the CC2420 to compensate the RSSI loss due to temperature variation by replacing Pout in Equation (2) by RSSIloss in Equation (1). Our scheme aims to simplify the transmission power control by compensating the RSSI change based on the temperature information sensed at each node. The proposed compensation scheme does not require any communication overhead with neighbor nodes, but rather utilizes the information gathered from the temperature sensor located at a local node. This open-loop feedback control will reduce significantly the complexity of the closed-loop feedback control for transmission power control.

4.3. Details of the Proposed Scheme

We define important parameters: the RSSI threshold, the Max/Min number of the neighbor nodes and transmission power level as follows:

The RSSI threshold is the minimum value required to maintain the link reliability. Based on previous research [6], the PRR is at least 85% when the RSSI is above the threshold (−87 dBm). In this paper, we assume that the neighbor node with −87 dBm or greater of RSSI is reliable.

Max/Min numbers of the neighbor nodes are critical parameters for network performance. Kleinrock et al. [15] considered the problem of a set of nodes and tried to maximize the expected throughput that a packet can make toward its destination. They suggested that neighbor = 5.87 would indeed maximize throughput. We utilize this value and set Neighbormax and Neighbormin to 6 and 5 respectively.

For experiments, two TELOSB nodes are placed 7 meters away from each other and the transmission power used is 0 dBm. One node in the enclosure is exposed to a temperature variation from 28 °C and 68 °C caused by a heater. The enclosure has the maximum temperature, 68 °C, in our experiment. As shown in Figure 10, we increase the temperature from 28 °C to 68 °C over 1,200 seconds, in order to measure the RSSI variation.

As shown in Figure 11, RSSI loss of the TELOSB mote is measured between 28 °C to 68 °C, with a maximum loss of 8 dBm at 68 °C. Increasing the temperature causes the RSSI loss over most of time. However, from 600 seconds to 900 seconds, the measured RSSI fluctuates and is a little increased while temperature increases. We guess this unexpected variation occurs due to factors other than the temperature. In the proposed scheme, these errors will be compensated through the closed-loop feedback control. The RSSI trend line in Figure 11 is approximately consistent with Equation (1).

To evaluate the performance, we compare our scheme with the maximum power, power level = 11 (PRR = 100% @25 °C), and DTPC in a changing temperature environment. Eight nodes are deployed, one of which is in the temperature changing enclosure. The maximum transmission power allows all the nodes to be connected. The power level = 11 maintains a maximum of six connections at 28 °C. DTPC and our scheme control the transmission power level every 1sec to maintain 5∼6 neighbor nodes.

While the temperature changes, the power levels are measured with various schemes, as shown in Figure 12(a). The cumulative sums of power levels are also shown in Figure 12(b). Power level = 11 has the lowest energy consumption, followed by the proposed scheme, DTPC, and the maximum transmission power (0 dBm). However, Power level = 11 causes many packet losses because it cannot adapt dynamically to the link quality changes.

As shown in Figure 13, the maximum transmission power always maintains connectivity with seven neighbor nodes without adapting link quality changes. It provides almost 100% of the PRR. However, the maximum power leads the unnecessary energy consumption with its fixed maximum transmission power level as shown in Figure 12. Power level = 11 requires the minimum energy consumption. However, Power level = 11 has a poor PRR and fails to maintain the appropriate number of neighbor nodes, that is, 5 to 6, because it cannot provide the link quality adaptation according to temperature variation.

In this paper, we have presented an empirical study for the effect of temperature on wireless link quality. It shows that the temperature is one of most important factors impacting the link quality variation. The relationship between RSSI and temperature has been modeled for our transmission power control scheme. Our scheme uses open-loop feedback control to compensate for changes of link quality according to temperature variation. By combining both the open-loop temperature-aware compensation and the close-loop feedback control, we can significantly reduce the overhead of transmission power control in a wireless sensor network. In the future, we plan to further extend our scheme to consider other factors besides temperature affecting the link quality and to apply our scheme to a large-scale wireless sensor network.

This work was supported by the IT R&D program of MKE/IITA [2008-S-041-01, Development of Sensor Network PHY/MAC for the u-City]. It has also been conducted by the Research Grant of Kwangwoon University in 2010. 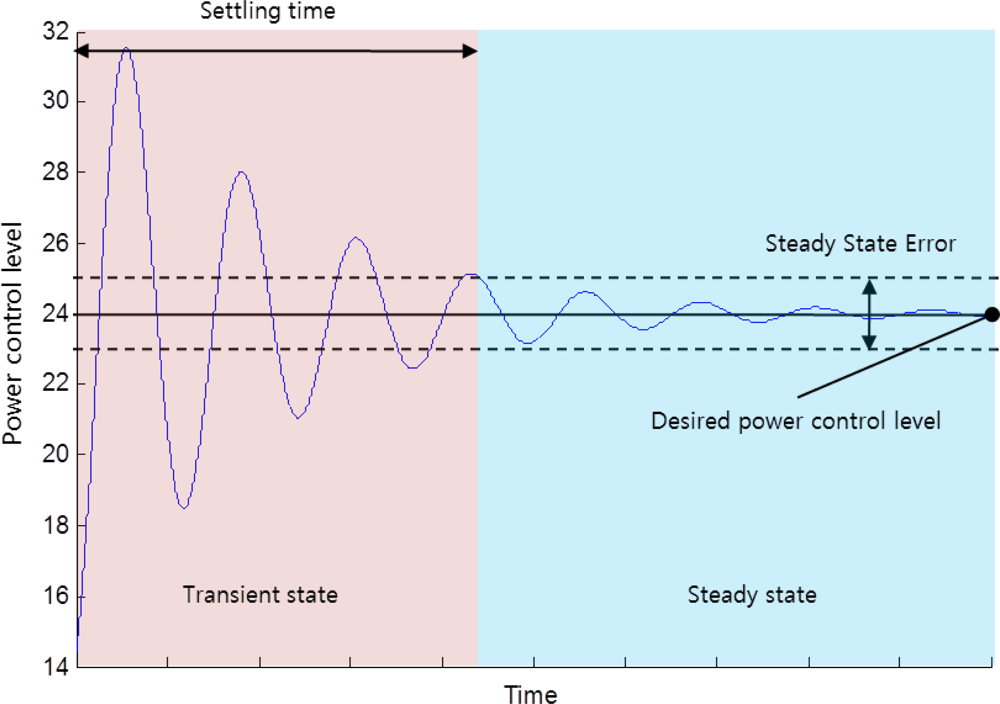