Design and Implementation of a Digital Angular Rate Sensor

In recent years, MEMS sensors have become more and more popular in the industrial and automotive fields. Because the MEMS angular rate sensors have the characteristics of high performance, extremely compact size, low power operation and low cost, they has been considerable interest in their design and fabrication [1,2]. Currently, there are many micromechanical gyroscopes (angular rate sensors), including electrostatically driven [3,4], electromagnetic driven [5–7] and piezoelectric driven [8,9] ones, etc., designed to measure the angular rate or the rotation angle by integrating the measured angular rate with respect to time. These gyroscopes have drive parts and sensing parts, so their structures are complex. We are investigating a novel MEMS-based gyroscope, which has no driving parts, and utilizes the circumrotation of the rotating carrier itself as driving force. Therefore, it is suitable for detecting the angular rate of a rotating carrier due to its characteristics.

2. The Sensing Element and Operating Principles

The structure of the sensing element is shown as Figure 1(a). It consists of a silicon four leaf clover structure. The silicon pendulum is obtained through bulk micromachining technology and attached to the center. It can form two pairs of capacitances with the opposite copper plating ceramic substrate, respectively.

The dimensions of the sensing element are illustrated in Figure 1(b). The silicon pendulum is connected with an analog ground, and the four pieces of copper plating ceramic substrate are connected together, as shown in Figure 1(b). Thus we can obtain a pair of differential capacitors, shown in Figure 1(b), right. Figure 1(c) is the corresponding C/V transformed circuitry. It is clear that the capacitance of these four capacitors varies with the angle velocity Ω. When the change of differential capacitance is small it is easily disturbed by the distributed capacitance, while in the pick-up circuit, the alternating-current bridge is used as the interface of the transfer circuit. The differential capacitance is discharged and charged by a square wave pulse current, then amplified by amplifier, finally the output voltage signal, which is directly proportional to the angle velocity Ω, is obtained.

The sensing principle of the sensing element is based on the measurement of Coriolis forces. From Figure 1(a), the sensing element is installed on a rotating carrier and rotates together with the rotating carrier along the OZ axis. Once the rotating carrier has a yaw or a pitch angular rate (along the OX or OY axis direction), the silicon pendulum swings around the internal sensitive OX axis under the Coriolis forces. Therefore, the differential capacitance C1, C2 can sense yaw or pitch angular rate. According to the C/V transformed circuitry, as shown in Figure 1(c), we can obtain:

where φ̇ is the rolling frequency of rotating carrier, Ω the fused yaw and pitch angular rate, uo the output voltage, θ1(t) the initial phase, f(φ̇) the transmission factor, which depends on the φ̇. In order to eliminate the effect of φ̇, according to the method [11], uo can be expressed as u1 as follows: where k is the scale factor. From the function (2), it is clear that the virtual value of output voltage is directly proportional to the synthesis of angular rate Ω of rotating carrier between yaw and pitch.

where A is output max value of output, which depends on the rolling rate φ̇, θ2 is the initial phase, The frequency of the output signal is the same as the rotating carrier’s rolling frequency. According to the study above, the synthesis angular rate of the rotating carrier is determined by measuring the phase difference between the signals of gyroscope and accelerometer. The relationships between Ω, ΩP,ΩF, and Δθ = θ1 (t) – θ2 are shown in Figure 2.

Thus we can obtain the following expressions:

In order to implement all of the above-mentioned operations, we have designed signal-conditioning hardware circuits as shown in Figure 3. The hardware circuits consist of four parts: sensing elements, analog signals pretreatments, data acquisition module and signal demodulation processing circuits.

The first part includes two sensing elements: gyroscope and accelerometer, which sense the angular rate and the direction, respectively. The second part is used to deal with the analog signals of the sensing elements, including the gyroscope signal pretreatment circuit and the accelerometer pretreatment circuit, shown in Figure 4 and Figure 5, respectively. The gyroscope signal pretreatment circuit mainly consists of the regulated power supply, bridge circuit, pulse excitation, difference amplifier, band-pass filter demodulator and phase compensation, etc. It is capable of complete detection of small capacitances and transferring the capacitance into a voltage signal that ranges from −10 V to +10 V.

The output signal of the accelerometer contains DC component, which changes with different rotating rates. In addition to this, the output AC component of the accelerometer is weak, about −0.25 V∼+0.25V. To solve these problems, we use a capacitance (c18) to filter out the DC, then make up the output signal though an operational amplifier circuit to amplify it 10 times, coupled with a superimposed voltage of 2.5 V DC, so the output voltage is in the range 0 V∼5 V.

The third part is data acquisition module as shown in Figure 6, which mainly consists of AD977A, CD4051 and TLP281-4. There are two input signals but AD977A only has one input port, so we designed a switch module. The CD4051 analog multiplexer is a digitally-controlled analog switch having low ON impedance and very low OFF leakage current; it is a single 8-channel multiplexer having three binary control inputs, A, B and C, and an inhibit input. The three binary signals select 1 of 8 channels to be turned on, and connect one of the 8 inputs with the output. A, B and C are controlled by TLP281-4 alternately to sample the gyroscope and accelerometer signals.

The last part is the signal demodulation processing circuits based on DSP2812 and peripheral circuits. The peripheral circuits include power module, reset circuit and serial port communication circuit of DSP2812, etc. We use a MAX3232 chip as communication for signal output. The 5V power design is based on the LM2576 and the 1.8 V and 3.3 V voltage is transferred by using the LM1117.

The signal processing is shown in Figure 7. First, we can filter the signal and calculate the frequency of the sensing element (accelerometer) signal, which is same as the rotating carrier rolling rate; Secondly, we calculate the peak output voltage of the signals and get the phase difference between gyroscope and accelerometer. At the same time, we can obtain the envelop of the gyroscope signal, which is proportional to the fused angle rate of yaw and pitch. According to the phase difference between gyroscope signal and accelerometer signal, we can obtain yaw angular and pitch angular rate.

The appearance of the digital angular rate sensor is shown in Figure 8. The device has the shape of a cylinder with a diameter of 5 cm and a height of 4 cm. The sensor can be mounted on a simulator of a rotating carrier system designed specifically to apply this sensor test. The system consists basically of a three-axis servo table. One is used to simulate the rotating carrier, and the others two control the attitude of the rotating carrier. The simulator rolls as a rotating carrier with yaw and pitch angular rate. The digital outputs are recorded by a computer. First of all, we set a rolling rate at 20 Hz, then set yaw and pitch angular vibration frequency as 1 Hz, vibration amplitude as 10°, respectively. The output results were recorded by the computer. Figures 9–11 illustrate the comparison between the measured angular rate and the actual rate.

The digital angular rate sensor can sense rolling, yaw and pitch angular rate of rotating carrier at one time. From Figures 9–11, it is clear that the measurement results match the actual results very well. The relative error of the sensor is less than 0.5%.

This project was supported by the National Natural Science Foundation of China (No. 60971024), the Program of Beijing Key Lab for Sensor (No. KF20101077202) and Key Laboratory of Modern Measurement & Control Technology (Beijing Information Science & Technology University), Ministry of Education. 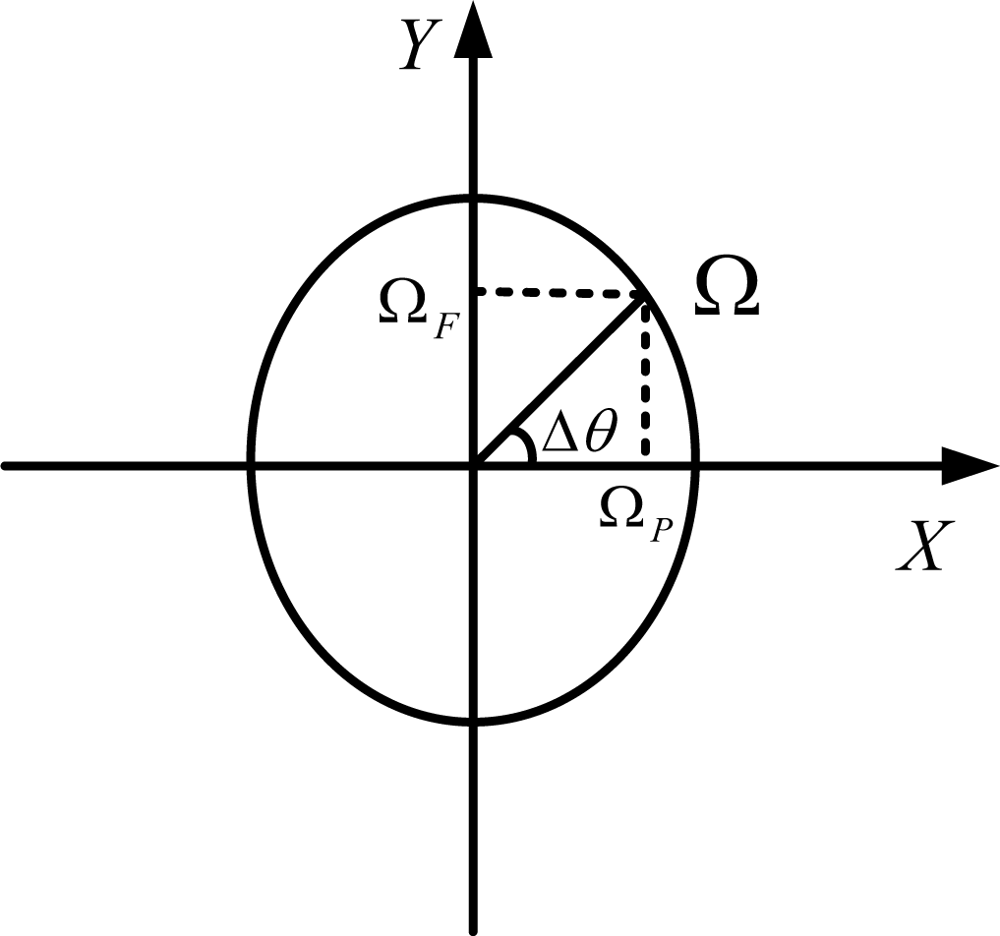 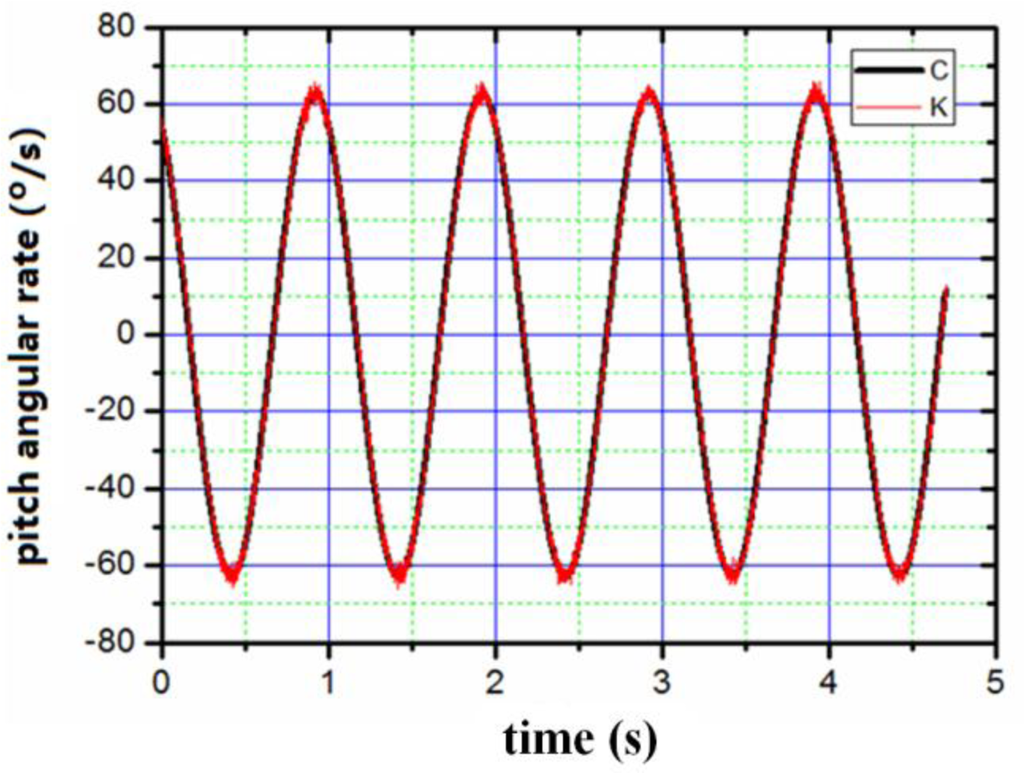 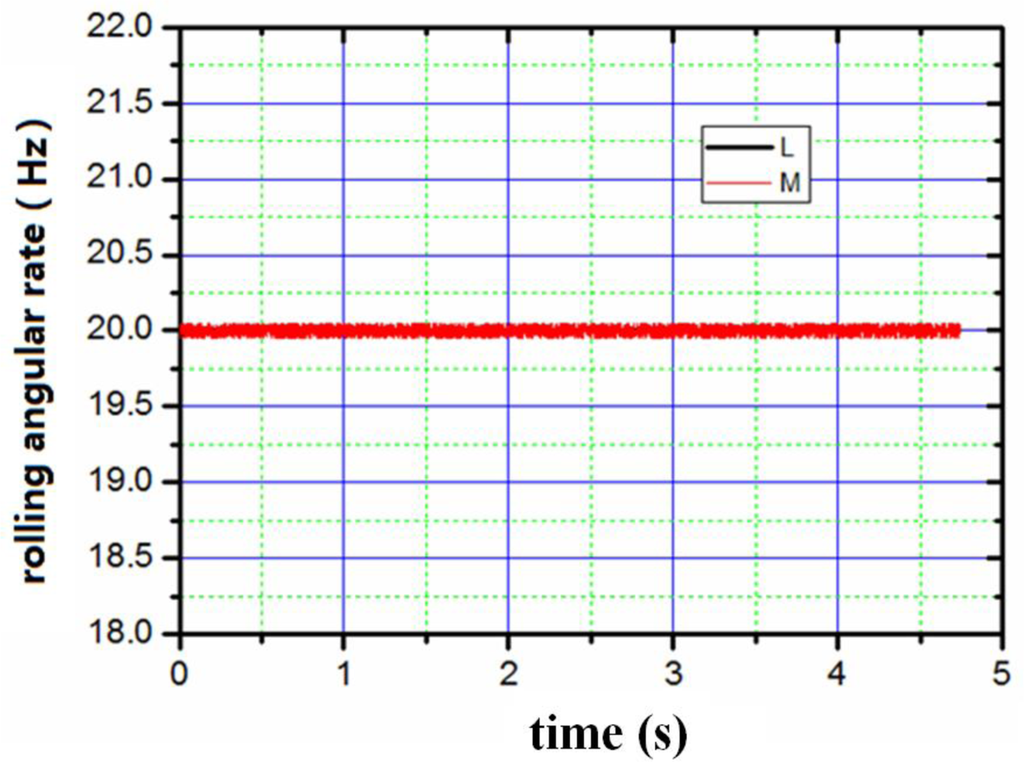 © 2010 by the authors; licensee MDPI, Basel, Switzerland. This article is an open access article distributed under the terms and conditions of the Creative Commons Attribution license (http://creativecommons.org/licenses/by/3.0/.)