The Influence of Water Currents on Movement Patterns on Sand in the Crown-of-Thorns Seastar (Acanthaster cf. solaris)

Like most coral reef organisms, crown-of-thorns starfish (Acanthaster spp.) are expected to be highly vulnerable to predation as they transition from a planktonic larval phase to settling among reef habitats. Accordingly, crown-of-thorns starfish might be expected to exhibit behavioural adaptations which moderate exposure to predation at this critical stage in their life history. Using pairwise choice experiments and settlement assays, we explored the ability of competent larvae of Acanthaster cf. solaris to first detect and then actively avoid benthic predators during settlement. Pairwise choice experiments revealed that late stage brachiolaria larvae are able to detect predators in the substrate and where possible, will preferentially settle in microhabitats without predators. Settlement assays (without choices) revealed that larvae do not necessarily delay settlement in the presence of predators, but high levels of predation on settling larvae by benthic predators significantly reduce the number of larvae that settle successfully. Taken together, these results show that crown-of-thorns starfish are highly vulnerable to benthic predators during settlement, and that variation in the abundance of benthic predators may exert a significant influence on patterns of settlement for crown-of-thorns starfish. View Full-Text
Keywords: behaviour; coral reefs; predation; resilience behaviour; coral reefs; predation; resilience
►▼ Show Figures 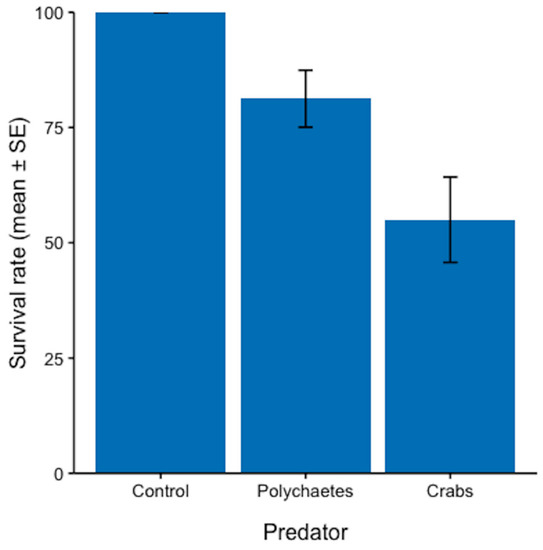