:
The presence of associated endofauna can have an impact on the health of corals. During fieldwork on the southern Caribbean island of Curaçao in 2021, the presence of an unknown coral-dwelling worm snail was discovered, which appeared to cause damage to its hosts. A study of photo archives revealed that the species was already present during earlier surveys at Curaçao since 2014 and also in the southern Caribbean island of Bonaire in 2019. It was not found in St. Eustatius, an island in the eastern Caribbean, during an expedition in 2015. The vermetid snail was preliminarily identified as Petaloconchus sp. Its habitat choice resembles that of P. keenae, a West Pacific coral symbiont. The Caribbean species was observed in 21 host coral species, more than reported for any other vermetid. Because Petaloconchus sp. is a habitat generalist, it is possible that it was introduced from an area with another host-coral fauna. The unknown vermetid is considered to be cryptogenic until future studies reveal its actual identity and its native range.
Keywords:
coral damage; coral reef; host generalist; Millepora; scleractinia

Worm snails of the family Vermetidae are common inhabitants of coral reefs and rocky shores in tropical to warm–temperate marine coastal waters, where they live embedded in dead or live corals or attached to other hard substrata [1]. They have tube-shaped shells, mostly without the regular shell coiling [2,3], which in some species form dense, reef-building aggregations [4,5,6]. Because of their reef-building capacity in the intertidal or immediate subtidal zone, they play an important role as sea-level and sea-surface temperature indicators in the fossil record [6,7,8]. The history of Vermetidae systematics is complex, which is partly due to the confusion of their calcareous tubes with those of other organisms, such as serpulid worms [9].
Although there is much literature on coral-associated fauna in the Caribbean, vermetid snails are usually not included [10,11,12,13]. Apparently, all host-related information on coral-associated vermetids is from the Indo-Pacific, predominantly involving Ceraesignum maximum (G.B. Sowerby I, 1825), previously known as Dendropoma maxima, which dwells on scleractinians, blue corals, and fire corals [14,15,16]. This species is notorious because of its harmful effect on the growth, survival, and photophysiology of host corals [17,18,19,20]. There are only a few other coral-vermetid records from the Indo-Pacific, including Petaloconchus keenae Hadfield & Kay, 1972 near Hawaii [21], Thylacodes hadfieldi (W.C. Kelly, 2007) near Guam [22], and Thylacodes spp. off the west coast of India [23].
During a recent survey of the coral-associated fauna of Curaçao, coral-dwelling worm snails were discovered for the first time in the Caribbean. In order to investigate their preferred habitats, all observed host coral species were recorded. Because the species appears to be cryptogenic, we discuss why no earlier records are known for the Caribbean. The present report serves to create awareness for this cryptogenic species for future research on its origin and its possible effect on the health of Caribbean coral reefs.

The survey of coral-associated fauna took place during October–December 2021 along the leeward side of the island of Curaçao. Because the coral-dwelling vermetid was not recorded before in the Caribbean and was overlooked by the first author during earlier surveys, his photo archive was checked for the presence of this snail during fieldwork at Curaçao in 2017, 2015, and 2014, Bonaire in 2019, and St. Eustatius in 2015. Curaçao and Bonaire are located in the southern Caribbean and St. Eustatius in the eastern Caribbean (Figure 1). All association records were listed per island and year (Table 1). Photographic evidence (showing a shell with the operculum present) is presented for each host (Supplementary Materials).

Since Caribbean coral-dwelling vermetids previously were not recognized in the scientific literature, they may have become introduced recently or they may have been overlooked. The tubes of the snails can be confused with those of polychaete worms of the serpulid genus Spirobranchus Blainville, 1818, which are common in the Caribbean, where they have a wide host range [30]. Both groups, coral-dwelling worm snails and serpulid worms, have their tubes partially embedded in the coral skeleton and both possess an operculum that is used to close the tube for the protection of soft bodyparts [2,31]. Spirobranchus worms are eye-catching because of their high densities and colorful, twin-conispiral branchiae [31,32]. Vermetid snails, on the other hand, use transparent mucus nets to catch food (Figure 3D,F) [33,34,35], which makes them less remarkable (Supplementary Materials Figure S19). 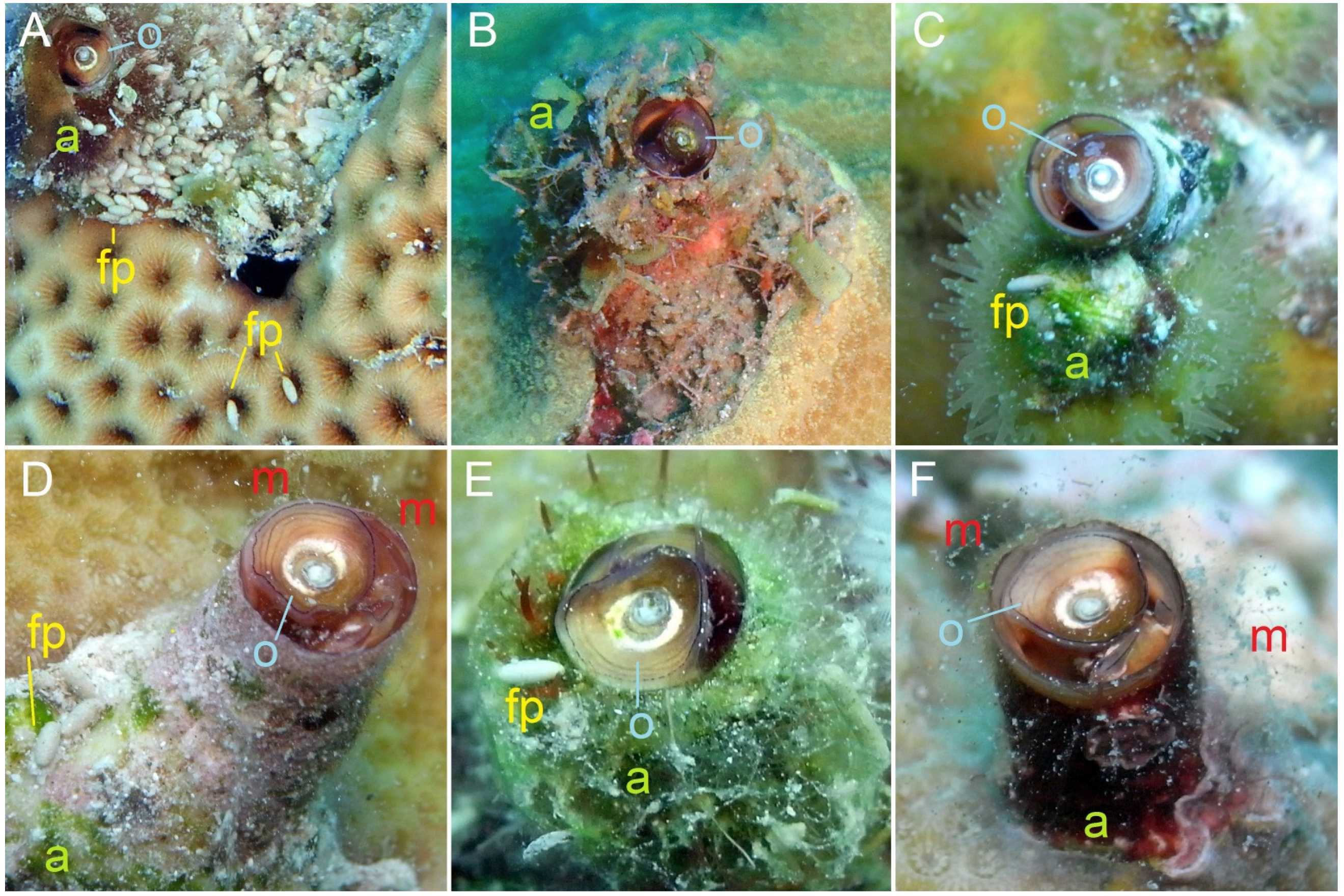 The habitat of Petaloconchus sp. resembles that of P. keenae, which has been reported as an associate of the Indo-Pacific coral genera Porites, Montipora, and Pavona at the Hawaiian islands [21], and possibly as Petaloconchus cf. keenae living in corals at Kwajalein Atoll in the Marshall Islands [36]. It is therefore reasonable to speculate that the coral-associated Petaloconchus sp. in the southern Caribbean is the same species and that it has been introduced from the tropical Indo-Pacific. As long as its identity cannot be confirmed by molecular analyses and morphological studies of the radula, protoconch, egg capsules, and coloration of shell and body [21,22], we consider the present species to be cryptogenic in the southern Caribbean. An earlier presence of such Caribbean worm snails could be verified with the help of coral collections in natural history museums [37]. Most museum collections of stony corals consist of dry specimens, but remnants of vermetid shells may still be present and recognizable.
Considering the poor knowledge of Petaloconchus sp. in the Caribbean, it is relevant to know of possible natural enemies that may be able to remove evidence of coral-dwelling vermetids. The carpiliid crab Carpilius convexus (Forskål, 1775) has been reported to prey on the vermetid Ceraesignum maximum in the Red Sea by breaking its shell and the coral in which it lives [38]. A possible predator of Petaloconchus sp. would therefore be Carpilius corallinus Herbst, 1783, which has been observed to crush large tubes of serpulid worms and also parts of the host coral [39].
The host-coral range in the present study (21 species) is more extensive than recorded for any other coral-associated vermetid. The host ranges of the Indo-Pacific vermetids C. maximum and P. keenae (mentioned above) are based on miscellaneous records and might be much larger in reality. Previous field surveys specifically targeting host-coral ranges (and prey preferences) of gastropod families and genera also yielded various additional host records and showed that some species are very host-specific, e.g., Leptoconchus [40] and Epitoniidae [41], and that others are generalists, such as some species of Coralliophila [42] and Drupella [43,44]. Research on coral-dwelling nudibranchs, such as the well-camouflaged Phestilla spp., also demonstrates that an ongoing search for possible hosts results in new association records and species discoveries [45,46,47].
The occurrence of coral injuries (dead coral surface and shells overgrowing coral polyps) suggests that the snails are harmful to their hosts, which is relevant for coral reef conservation [48,49]. It is possible that coral polyps are killed by the snail’s mucus webs (Figure 2A and Figure 3D,F), which may smother and even poison them if the mucus is toxic, as reported for Ceraesignum maximum [50]. The occurrence of turf algae on the shells is expected to increase damage to the hosts, as observed in Spirobranchus tubes overgrowing coral polyps [31,32]. Future field research with a focus on reef-dwelling vermetids will likely result in more information on their densities and additional host records. Molecular analyses may reveal the actual identity of the present species and its native range, and also whether cryptic speciation has taken place across the various host corals.

The field research at Curaçao was funded by the Alida M. Buitendijk Fund, the Jan-Joost ter Pelkwijk Fund, the Holthuis Fund, and the Dutch Research Council (NWO) Doctoral Grant for Teachers Programme (nr. 023.015.036). Fieldwork at Bonaire was supported by the World Wildlife Fund (WWF) Netherlands. The Treub Maatschappij (Society for the Advancement of Research in the Tropics) funded research at both Bonaire and Curaçao.

We are grateful to the funding agencies mentioned above. We thank Rudiger Bieler (Field Museum of Natural History, Chicago) for the identification of the worm snail. We thank the staff of CARMABI (Curaçao) and the Dive Shop for their hospitality and assistance during the fieldwork. BWH is also grateful to Stichting Nationale Parken Bonaire (STINAPA), Dutch Caribbean Nature Alliance (DCNA) and Dive Friends (Bonaire) for logistical support at Bonaire, and to the Caribbean Netherlands Science Institute (CNSI), St. Eustatius National Parks Foundation (STENAPA), and Scubaqua Dive Center, for facilitating research in St. Eustatius. We also want to thank two anonymous reviewers for their constructive comments, which helped us to improve the manuscript. 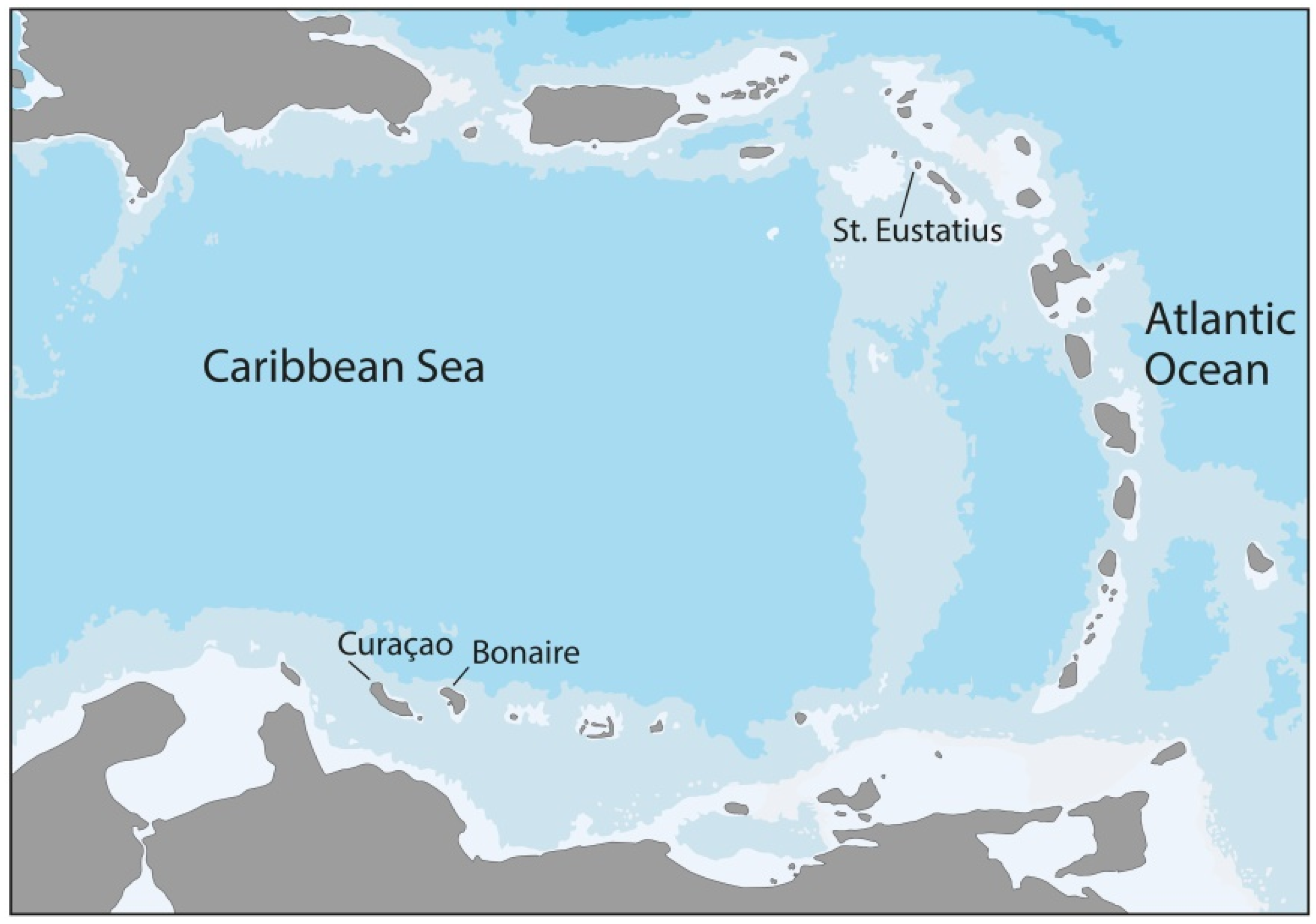