Peritrichs usually settle on the external surface and gills of crustaceans. However, their physiological effect on the host has not been studied. Respiratory rate is a susceptible index for some factors that affect an organism. To test if ciliates attached to the crustacean gills have a physiological effect, we measured crustacean oxygen consumption in a closed system. Crayfish Cambarellus (Cambarellus) montezumae were collected in Lago Xochimilco in Mexico City and were isolated in chambers. Two peritrich species, Cothurnia variabilis (32.5%) and Epistylis gammari (67.5%), were observed on the gills. The metabolic rate was evaluated by oxygen consumption with a polarimetric oximeter. Statistical analyses demonstrated that a density of ciliates attached to the gills of the crayfish above ~50 individuals increased oxygen consumption with a positive correlation to epibiont density. We conclude that C. variabilis and E. gammari ciliate epibionts attached to the gill of the crayfish Cambarellus (Cambarellus) montezumae cause an increase in metabolic rate.
Keywords: oxygen consumption; decapod crustaceans; epibiosis; gills; peritrichs oxygen consumption; decapod crustaceans; epibiosis; gills; peritrichs

Respiratory rate, measured as oxygen consumption, is used as an indicator of metabolic rate, a reliable parameter to assess an organism´s physiological state [1]. In decapod crustaceans, the exchange of respiratory gases and ions occurs when water is drawn into the branchial chambers and circulated over the gill surfaces [2]. External factors (as salinity, light, oxygen, and temperature) and internal factors (as activity, nutrients, and molt) affect crustacean´s respiratory rate [3,4]. It has been reported that oxygen demand depends fundamentally on the water temperature and body weight [5]; temperature is the main parameter that influences the metabolic rate of organisms [4,6].
The respiratory rate can be so sensitive that its determination is a tool that helps us to know directly how an animal is performing in its interaction with the environment [7]. Oxygen consumption measurement can be used as an indicator of the effect of epibionts on the energy demands of host aquatic organisms.
In aquatic environments, epibiosis is frequent [8,9]. It is a facultative and interspecific association of two organisms, the epibiont, and the basibiont. The epibiont is the organism that attaches to an organic substrate, and the basibiont is the organism that serves as substrate [8,10,11]. Ciliates are common as crustacean epibionts since the crustacean body provides a suitable substrate for colonization, dispersion, shelter, and nutriment. Some ciliate species attach themselves to the gills of crustaceans by a stalk formed by glycoproteins, as species of the genera Epistylis Ehrenberg, 1830 and Cothurnia Ehrenberg, 1831. Ciliates have been recorded as epibionts in the gill of crustaceans since the 19th century. For example, Lightner [12] reported that Epistylis sp., Vorticella sp., and Zoothamnium sp. interfere with the locomotion and feeding of the larvae, causing stress and death in penaeid shrimp and prawns. Overstreet [13] observed that Zoothamnium sp. could cause mortality in species of the genus Penaeus (Fabricius, 1798). However, these and other studies have not provided evidence for the effects of attached peritrichs ciliates on crayfish physiology.
This work aims to analyze the possible influence on the metabolic rate of crayfish Cambarellus (Cambarellus) montezumae (de Saussure, 1857), of two species of peritrichs ciliates attached to the gills. The hypothesis is that crayfish oxygen consumption will be affected by a high density of the ciliates attached to the gills, regardless of the crayfish body weight.

Eighty Cambarellus (Cambarellus) montezumae crayfish were collected in Lago Xochimilco located at 19.261557 N and 99.078099 W, 2240 m.a.s.l. from January to April 2019. The animals were transported to the laboratory and kept in 25-liter aquaria, ten organisms per aquarium with constant aeration using air compressors (RA-806, Maxima®, Santee, CA, USA), with a rocky substrate and plastic tubular shelters. To avoid physiological stress to the crayfish caused by the variation of the water chemistry, they were acclimatized for four days to the conditions of the water reported as optimal for the species, such as temperature 22 °C, pH 7.4, and dissolved oxygen 4mg/L [14] and fed with a commercial balanced shrimp feed (Camaronina, Purina®, 35% protein, Mexico). Before starting the measurement of oxygen consumption, they were fasted for 12h. Immediately after oxygen measurement, each crayfish was weighed with an electronic balance (07932-0900, OHAUS Corporation, Parsippany, NJ, USA) Crayfish ( 0.71 g, SD 0.34 g, range ± 0.6 g) were grouped into three body weight classes: 1 (0.2–0.6 g), 2 (0.7–1.1 g), and 3 (1.2–1.6 g), to analyze the relation between ciliate abundance in the gills and body weight.

After acclimation and fasting, crayfish were individually placed in a 125 mL glass respiratory chamber with dechlorinated tap water. Initial oxygen concentration was measured with a polarographic oximeter (HI9143, HANNA®, USA), and the chamber was closed. After 50 minutes, the oxygen concentration was taken again. As controls, oxygen concentrations were also measured in chambers with 125ml water without a crayfish, initially and 50 min after closing the chamber. Oxygen consumption was calculated as the difference between the initial and final readings.
After oxygen measurement, crayfish were placed in an ice slurry to cause insensitivity and slaughtered using the splitting method [15]. Ciliates attached to the gill were counted, being each cell considered an individual. To ensure that gill ciliates were not released in the process of measuring oxygen consumption, the water of each chamber was examined with optical and stereoscopic microscopes.

For ciliate species identification, we followed protargol impregnation [16], a technique useful to show specific cellular characteristics of the zooids to determine species. Additionally, a light microscope (DIC) was used to obtain microphotographic records from zooids and colonies with a Nikon digital camera (Digital Sight DS2Mv, Nikon®, Tokyo, Japan) adapted to a microscope (Labophot2/AX70, Nikon®, Tokyo, Japan). For Scanning Electron Microscopy to show the details of the loriga and colonies organization, ciliates were separated and fixed in 4% formaldehyde for 24 h and washed with a buffer (pH 7.3). A dehydration protocol was followed, dried to the critical point with CO2, mounted, and coated with gold [17]. Samples were observed with a microscope (SU 1510 10kV, Hitachi®, Tokyo, Japan).

A multiple linear regression test was conducted (SPSS 19.0) to determine if the oxygen consumption depends on the number of cells of ciliates attached to the crayfish gills and the weight of the organisms. The ANOVA test was performed to find significant differences between oxygen consumption and the number of cells of ciliates in gills. A contingency table was also made with Fisher’s exact test between the three weight classes of the crayfish and the number of epibionts. These tests were applied with the 3.2.0 version of the R program and the graphs drawn with Graphpad Prism 9.

Ciliates attached to the gills of crayfish were identified as Cothurnia variabilis (Kellicott, 1883), and Epistylis gammari (Precht, 1935) (Figure 1). Only seven of eighty crustaceans collected (8.75%) did not exhibit attached ciliates. Epistylis gammari presented a greater abundance with 4450 individuals counted, representing 67.5%, while 2191 cells of C. variabilis were present, representing 32.5 % of ciliates attached to the gills.

Linear and multiple regression analyses showed a highly significant relationship between oxygen consumption rate and the number of ciliates attached to gills (p < 0.05) (Figure 2, Table 1). The crayfish with the higher number of ciliates (220 to 260) exhibited the highest metabolic rate, significantly different from those without ciliates (p < 0.05).
We found that 50 ciliate epibionts up is the number causing an increase of oxygen consumption of the crayfish, as compared with the 8.7% that had no ciliates attached to the gills, showing a significant difference (p < 0.05) in oxygen consumption from ~50 cells on attached to the gills.
It was observed that the crayfish with lower body weight exhibited a greater abundance of epibiont ciliates attached to the gills (Figure 3). The correlation of oxygen consumption versus the number of cells of ciliates was independent of crayfish body mass, with high variation in ciliate incidence found at lower body weights (Table 1). Although the specific metabolic rate seems to correlate negatively with crayfish body weight (Figure 4), it is not statistically significant (Table 1).

In conclusion, Cothurnia variabilis and Epistylis gammari ciliate epibionts attached to the gill of the crayfish Cambarellus (Cambarellus) montezumae cause an increase in metabolic rate. This ciliate–crayfish epibiosis may have no effect on interacting organisms or be classified as parasitism depending on the number of gill-attached ciliates since low densities do not affect gas exchange, but high densities do.
Future studies would be necessary to determine the energy balance using the complete bio-energetics equation to estimate the global effect of ciliates attached to crustaceans. This study presents the basis of the effect of ciliates on oxygen consumption by crayfish, showing the importance of this type of research.

The study was conducted according to the guidelines of the Declaration of Helsinki and approved by the Centro de Investigaciones Biológicas y Acuícolas de Cuemanco with authorization X-ERG-564-67-CIBAC-35573.

Publicly available datasets were analyzed in this study. This data can be found here: [https://data.world/mballesteros/data-2021-effect-of-epibiosis-on-metabolic-rate accessed on 7 June 2021 Effect of epibiosis on metabolic rate].

To Posgrado en Ciencias Biológicas, UNAM, and CONACyT for a grant to MRB. Thanks to M. B. Mendoza-Garfias (LMF1-LaNaBio) for the support in obtaining SEM images. We also appreciate the technical support of MS I. A. Morales-Salas and Biól. M. Reyes-Santos † (Facultad de Ciencias, UNAM). Special thanks to Gaytha A. Langlois (Department of Science & Technology, Bryant University) for her comments and assistance with the English language.

The authors declare no conflict of interest. All authors have read and agreed to the published version of the manuscript. 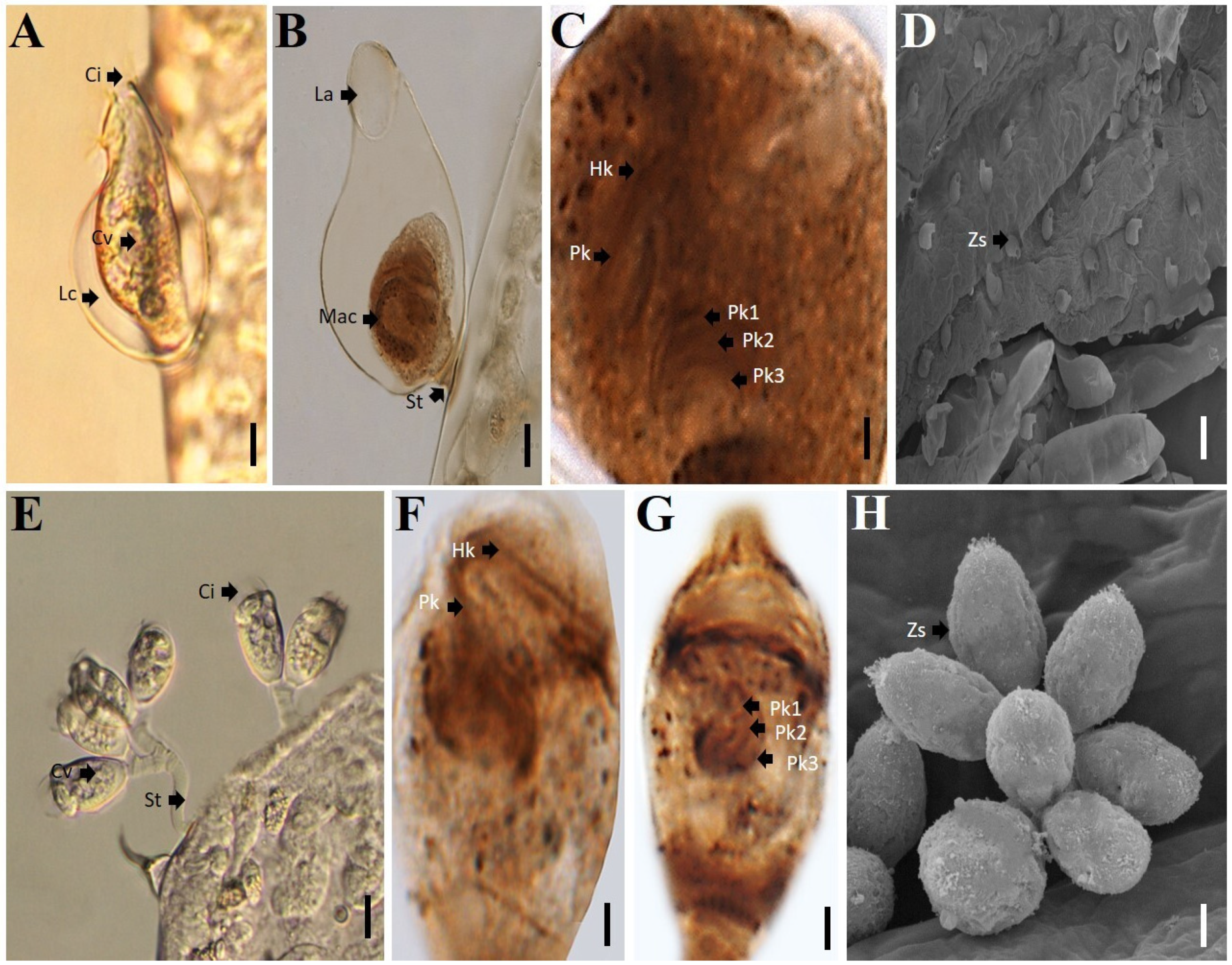 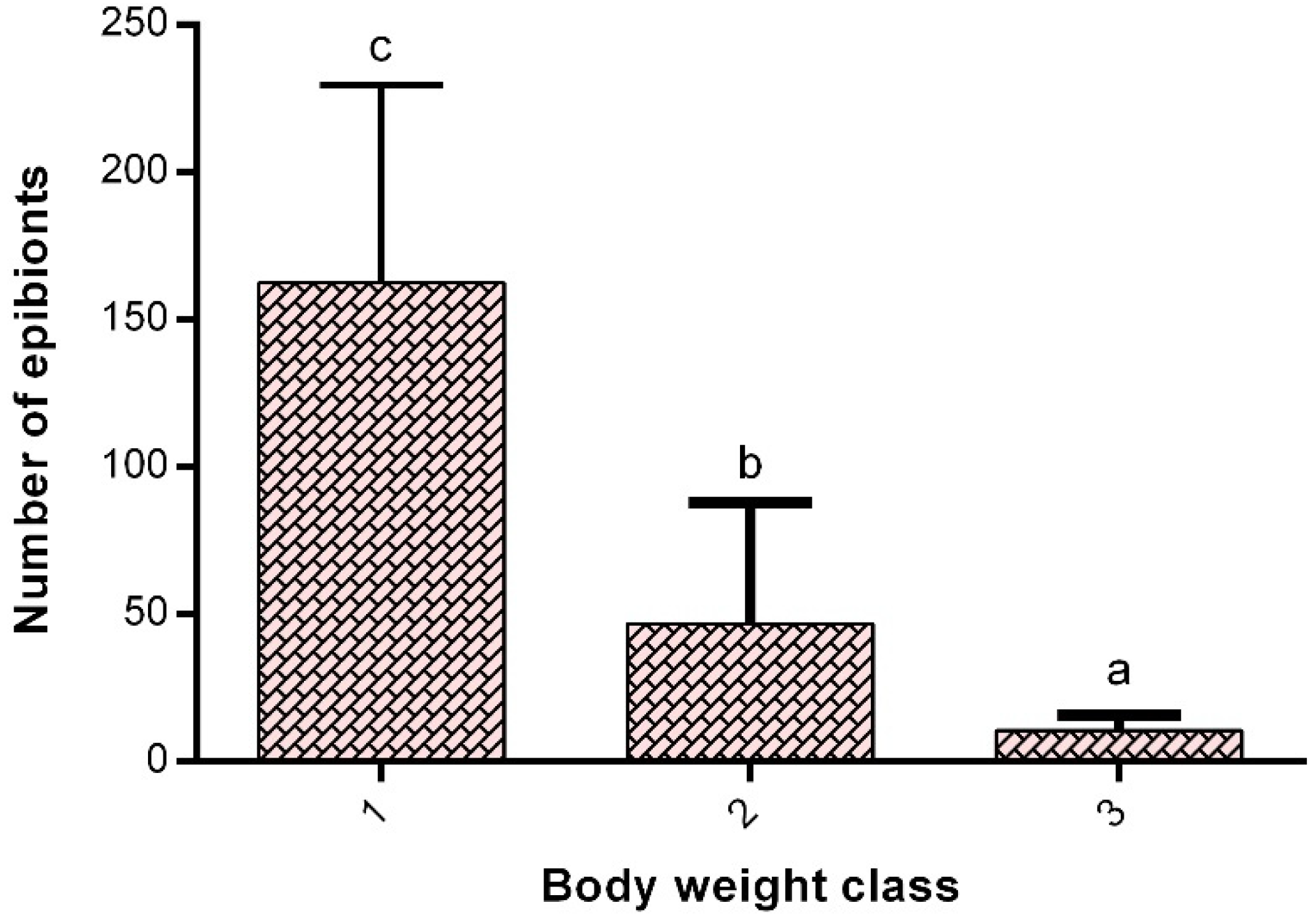 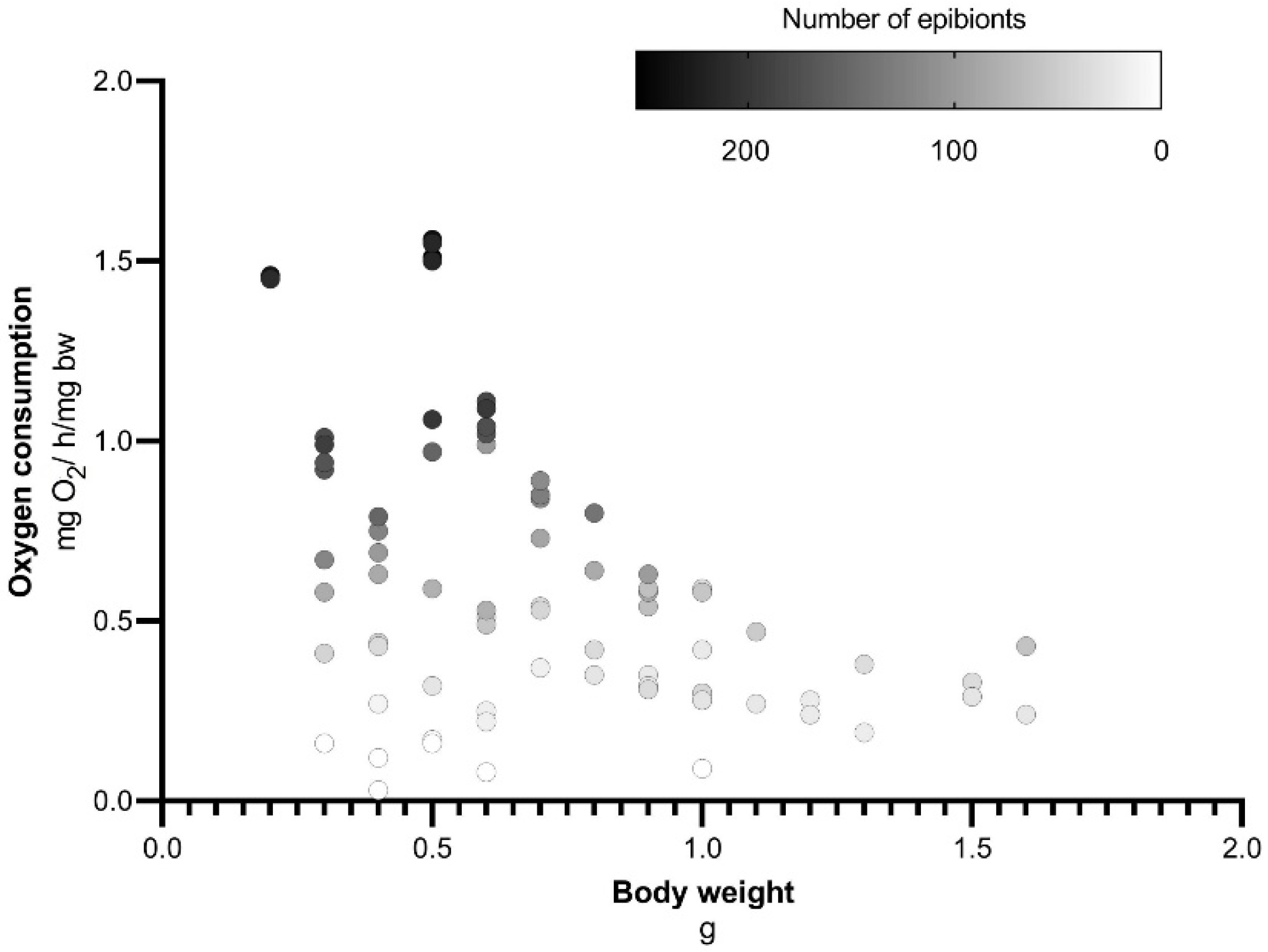