Coralligenous structuring species (CSS) form a group of marine megabenthic species with an engineering capacity. Since they are highly vulnerable to anthropogenic activities, they have been selected for the Marine Strategy Framework Directive (MSFD) monitoring programs. The pressure and impact of fishing gear and marine litter on these species were evaluated through the image analysis of 54 remotely operated vehicle (ROV) routes along the Campania coasts (Tyrrhenian Sea, Italy). CSS density was calculated as the number of colonies/100 m2. Anthropogenic pressure was estimated as the frequency of frames showing longline, nets, other gear, plastic objects, metal objects, and other litter; while the impact was expressed as the frequency showing necrosis/epibiosis, broken/upturned and covered/entangled colonies. Cnidaria dominate in the Napoli, Campanella and Capri areas, while Bryozoa dominate in Cilento N and Cilento S areas. Campanella and Capri appeared to be the least heterogeneous despite their higher CSS densities, which was possibly related to the dominance of a few species. These areas were the most affected by showing the highest numbers of fishing gear (longlines) and marine litter (metal objects) recorded, amongst which longlines are the most abundant. In addition, these fishing areas are either close to a large urban center or located along popular touristic routes. In all the areas, colonies with necrosis/epibiosis (CNE) impact are present with low-moderate values, while the category gears covering/entangling (GCE) impact prevails in the Campanella and Capri areas, and this is strictly connected to the high presence of fishing gear. View Full-Text
Keywords: mesophotic reefs; ROV; anthropogenic pressure; megabenthos; mechanical damage; epibiosis; necrosis mesophotic reefs; ROV; anthropogenic pressure; megabenthos; mechanical damage; epibiosis; necrosis
►▼ Show Figures 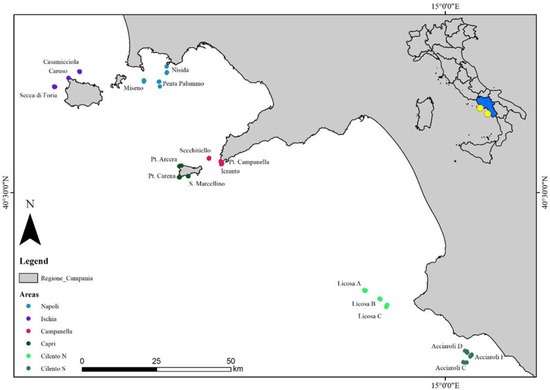