What Makes a Hot-Spring Habitat “Hot” for the Hot-Spring Snake: Distributional Data and Niche Modelling for the Genus Thermophis (Serpentes, Colubridae)
Previous Article in Journal

The genetic structure and demography of the yellowbelly threadfin bream, Nemipterus bathybius, in the northern South China Sea were examined using the mitochondrial DNA cytochrome b gene (1141 bp). High levels of haplotype and nucleotide diversities (0.98 and 5.26 × 10−3, respectively) showed that all populations exhibited a high level of genetic diversity. Analysis of molecular variance (AMOVA), FST statistics, and haplotype networks suggested the absence of significant genetic differentiation along the coast of the northern South China Sea. Although the results suggested that the lack of differentiation within the population structure of N. bathybius was shaped by ocean currents, our results also showed that the Qiongzhou Strait limited their migration between Beibu Gulf and the northern South China Sea. Neutrality tests and mismatch distributions indicated population expansion, but the Bayesian skyline plots and approximate Bayesian computation approaches suggested that the population sizes recently contracted. The diversification of multiple stocks, which were induced by two ocean current systems, contributed to these discordant results. Although these analyses of demographic history revealed no evidence for recent population bottlenecks, the population demography needs to be evaluated further. View Full-Text
Keywords: mitochondria; ocean currents; qiongzhou strait; demography; multiple stocks mitochondria; ocean currents; qiongzhou strait; demography; multiple stocks
►▼ Show Figures 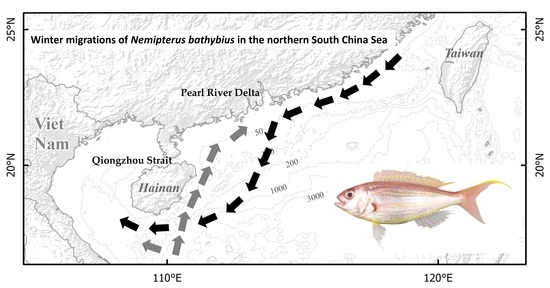