Annelida is a ubiquitous, common and diverse group of organisms, found in terrestrial, fresh waters and marine environments. Despite the large efforts put into resolving the evolutionary relationships of these and other Lophotrochozoa, and the delineation of the basal nodes within the group, these are still unanswered. Annelida holds an enormous diversity of forms and biological strategies alongside a large number of species, following Arthropoda, Mollusca, Vertebrata and perhaps Platyhelminthes, among the species most rich in phyla within Metazoa. The number of currently accepted annelid species changes rapidly when taxonomic groups are revised due to synonymies and descriptions of a new species. The group is also experiencing a recent increase in species numbers as a consequence of the use of molecular taxonomy methods, which allows the delineation of the entities within species complexes. This review aims at succinctly reviewing the state-of-the-art of annelid diversity and summarizing the main systematic revisions carried out in the group. Moreover, it should be considered as the introduction to the papers that form this Special Issue on Systematics and Biodiversity of Annelids.
Keywords: Annelida; diversity; systematics; species; new developments; special issue Annelida; diversity; systematics; species; new developments; special issue

Since 1866 annelids (although not including clitellates) were divided in two groups: Annelidae erraticae and Annelidae sedentariae [69]. The terms Errantia and Sedentaria were widely used afterwards to refer to the more mobile or vagile forms and the tubiculous or sedentary forms, respectively. This division was originally made based on the type of segmentation: polychaetes with homonymous segmentation (with all segments similar) were placed in Errantia, and those with heteronomous segmentation (segments are grouped in morphology distinct series each with a different function) in Sedentaria. This was not strictly followed later on, and some annelid families were moved around between these two groups (e.g., [51,52,53,54,70,71,72,73]). Since the 1960s, a different classification system, where families were gathered in orders, started to be widely used (e.g., [74,75,76,77,78]). Some of these “orders” were shown to be natural clusters when cladistic analyses started to be implemented on annelids [79]. However, some of the early phylogenetic hypotheses of Annelida were conflicting, especially at interpreting the basal relationships. While some of the classifications, based on analyses of morphological data, divided Annelida into Clitellata and Polychaeta, and the later further split into Scolecida (parapodia with similar rami and the possession of two or more pairs of pygidial cirri) and Palpata (with palps and peristomium limited to the lips) [8,41,79,80], other studies contradicted this view based on methodological discrepancies (e.g., [81,82]). Later molecular phylogenies corroborated that clitellates, echiurids, myzostomids and sipunculids, were within the polychaetes and recovered some of the earlier considered taxa within Palpata (that is Canalipalpata) closely related to Scolecida, returning to the earlier concept of Errantia (see Figure 1) and Sedentaria (including Clitellata) (see Figure 2) (e.g., [12,13,14,15,83,84,85]). There is, however, a series of heterogeneous and basally branching annelids previously considered among the sedentarians or errants. These are the Palaeoannelida, Chaetopteridae, Amphinomida and Sipuncula (e.g., [13,14,15], Figure 1).

The current ranges of valid nominal species in the literature go from 14,000 to 20,000 [7,86,87,88], and databases such as WoRMS currently considers 23,774 accepted species of extant annelids [89]. Recounting the number of species after the latest revisions, such as the Handbook of Zoology chapters [29,30,31] and the present special issue ([90,91,92,93,94,95,96,97,98,99,100,101]), there seems to be around 20,000 currently accepted nominal species (Figure 3). There is a continuous documentation of new species and diversity patterns as new taxonomic surveys are carried out in poorly explored geographic areas and localities, in new environments, such as the deep-sea and, surprisingly, also in apparently well-known zones when using different collecting gear, sorting methods or identification techniques, such as SEM and molecular taxonomy. 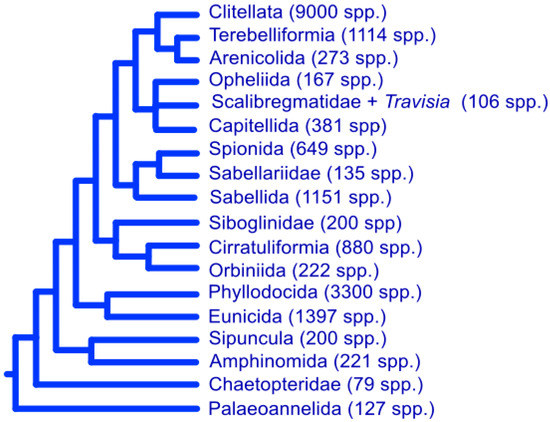 There are several factors influencing the discrepancy in the total numbers of annelid species considered as currently valid:
According to some predictions, there are potentially still 13,000 to 24,000 of annelid species awaiting to be discovered and described [86].

2.3. Gaps of Knowledge and Future Perspectives

In this special issue, a considerable number of researchers have participated towards providing a summary of the current knowledge about the biology, systematics and diversity in a broad range of annelid taxonomic groups. Most of them acknowledge the improvement in the assessment of internal relationships within the groups after molecular phylogenetic analyses have been performed. However, they also indicate that these are still not fully settled in most cases, and the analyses require further data, analytical considerations or a combination of sources of information. Robust phylogenies with comprehensive taxon coverage are crucial for stablishing the backbone of classification and to trace the evolution. The review papers in this special issue point to some of the main gaps in the knowledge on each of the taxonomic groups they deal with, but there are large similarities between all of them. It seems clear that there are some geographic areas that have been scarcely studied. In the marine realm, these include the North Indo-Pacific, South America, polar waters, but mainly the African coastline. In the terrestrial and limnic realms, South America, Africa and Asia are in need of further taxonomic surveys (Figure 4, but see papers in this Special Issue for more information). Our knowledge about habitats such as extreme environments [92] and the deep sea is also very limited (e.g., [117]).
In the papers within this Special Issue, there are suggestions as to how to proceed in the future if we want to progress at a steady and efficient manner towards increasing our knowledge about Annelida and in discovering the real diversity held in this phylum. These can be summarized as follows:

For the present special issue, we aimed at gathering updated information and discuss the recent advances in different diversity aspects and in recent systematic revisions of some of the major Annelida clades, including Palaeoannelida, Sipuncula, Phyllodocida, Eunicida, Orbiniida, Cirratuliformia, Sabellida, Opheliida and Scalibregmatidae, Terebelliformia, and Clitellata [90,91,93,94,95,96,97,99,100,101]. Other chapters take a more ecological approach, for example the papers on extreme or interstitial annelids [92,98]. By gathering this information, we aim to highlight the importance of annelids in biodiversity assessments and ecosystem functioning, to recapitulate differing diversity aspects about selected groups of annelids, and highlight the bridge between the written literature and the public databases and platforms regarding taxonomy, occurrence data and DNA sequences (e.g., WoRMS, GBIF, GenBank or DriloBASE Taxo). We also aim at revealing where the gaps of knowledge are and where the efforts should be concentrated if we want to progress towards a deeper understanding of the annelid diversity inhabiting our planet. We need to increase efforts in exploring understudied areas and in revisiting museum collections, in reviewing some neglected taxonomic groups, training the next generations of taxonomists and systematists, uncover hidden diversity, embrace methods for speeding up diversity assessments and taxonomic surveys, connect the updated taxonomic results with the more applied approach of ecology and pay special attention to the large number of species that have been translocated (e.g., [66]).
We have gathered 46 colleagues from 16 countries and 37 institutions at different stages in their careers, stressing the importance of collaboration (every chapter is multiauthored and multi-international), an amalgamation of different perspectives and sources of data, aiming at mentoring the next generation of annelid workers and highlighting the international and collaborative annelid community. Unfortunately, and due to different reasons, this special issue is not complete, and some relevant annelid groups and environments have not been included.

We would like to thank Dani Martin, Xavier Salvador and Alexander Semenov for allowing us to use the photographs to show the diversity of worms among annelids. It has been a privilege to be able to bring together this group of colleagues from all over the world gather some basic and updated knowledge about the diversity of Annelida. We are grateful to four anonymous reviewers for providing useful comments for the improvement of the manuscript. 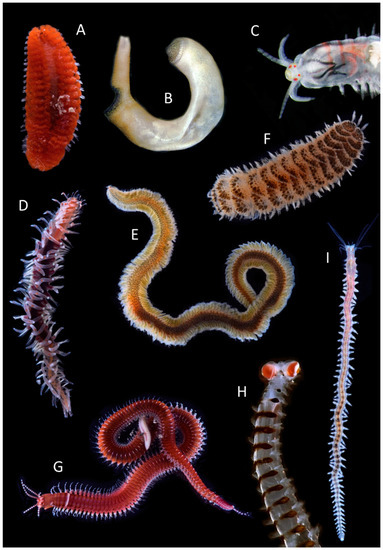 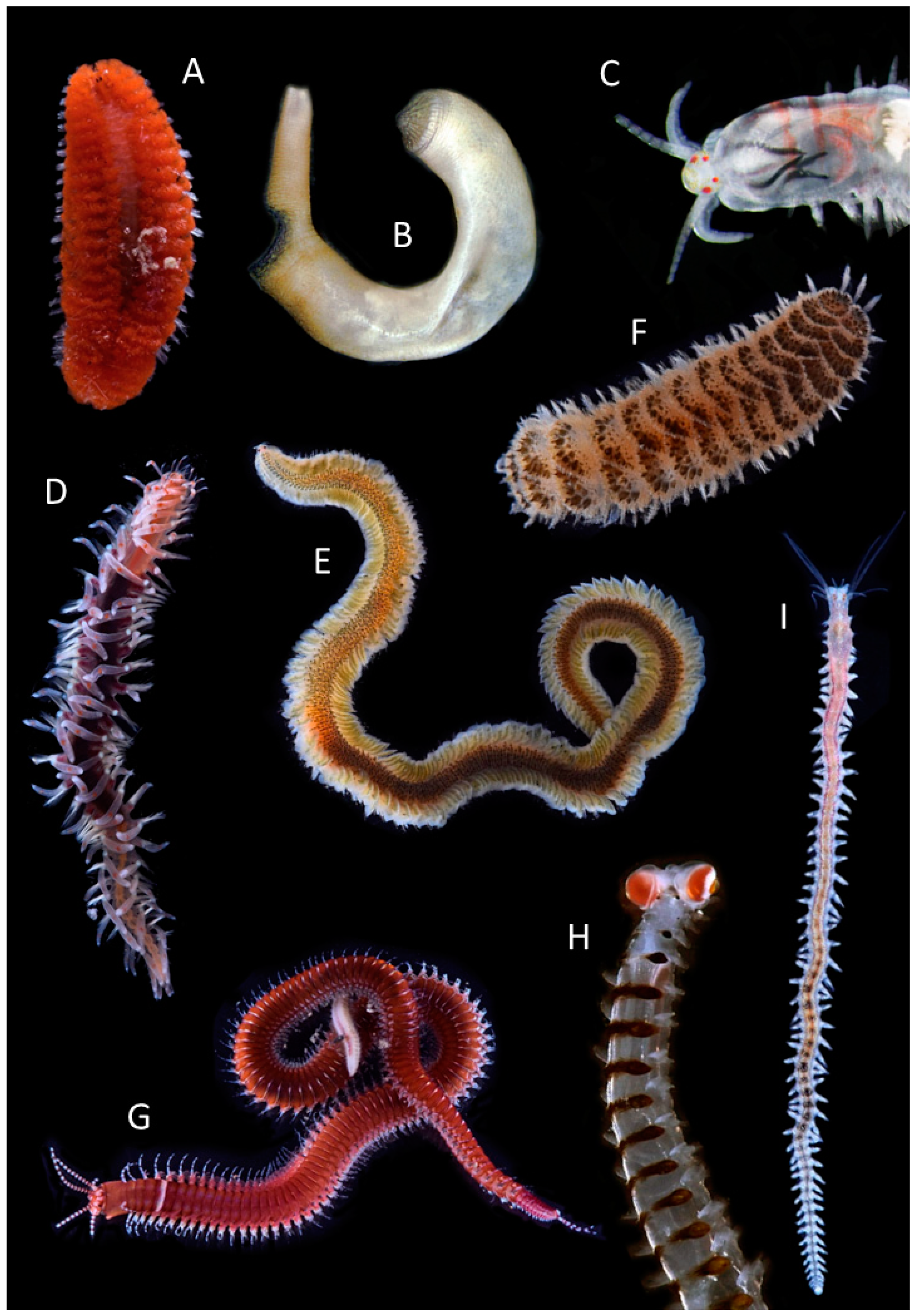 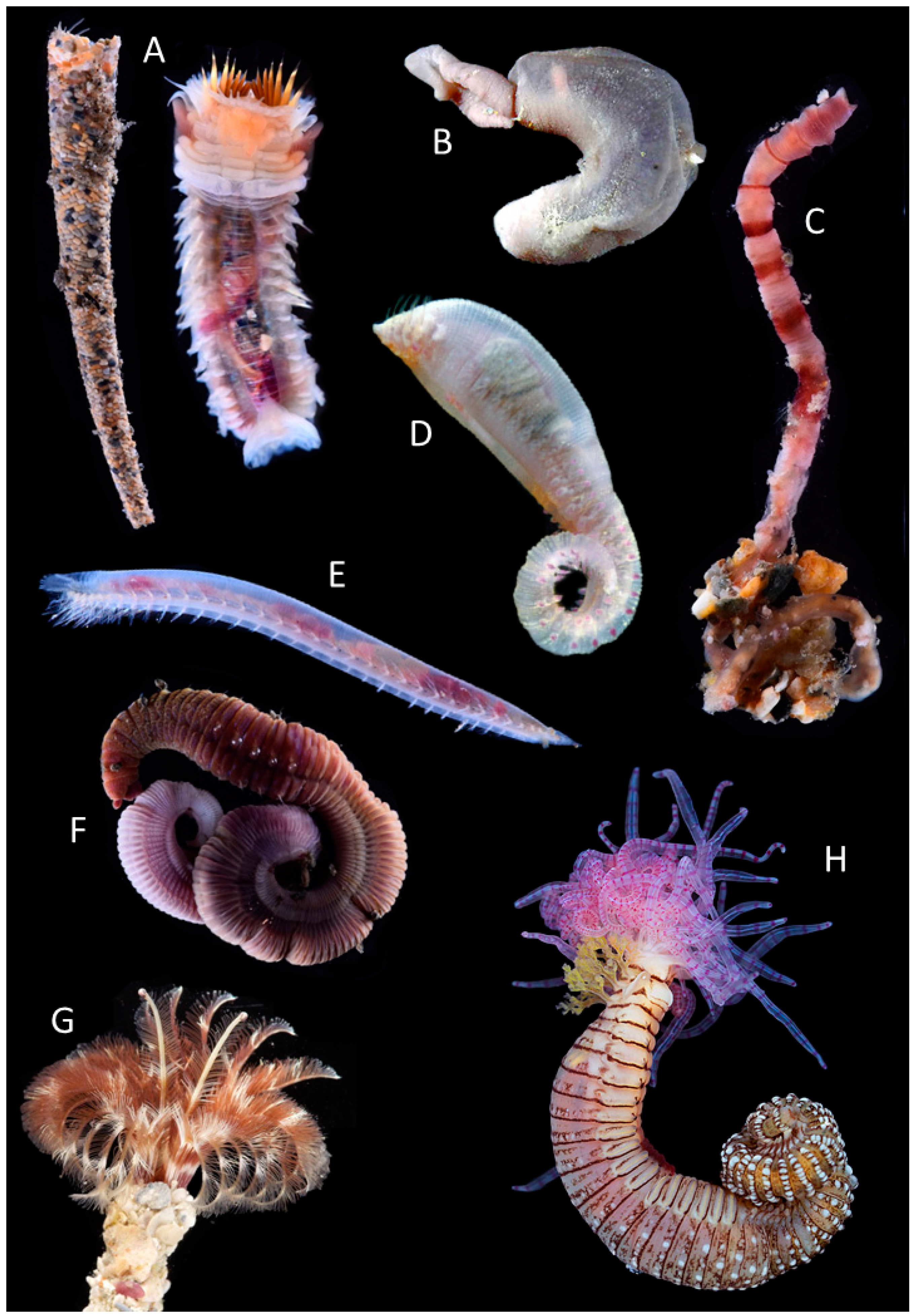 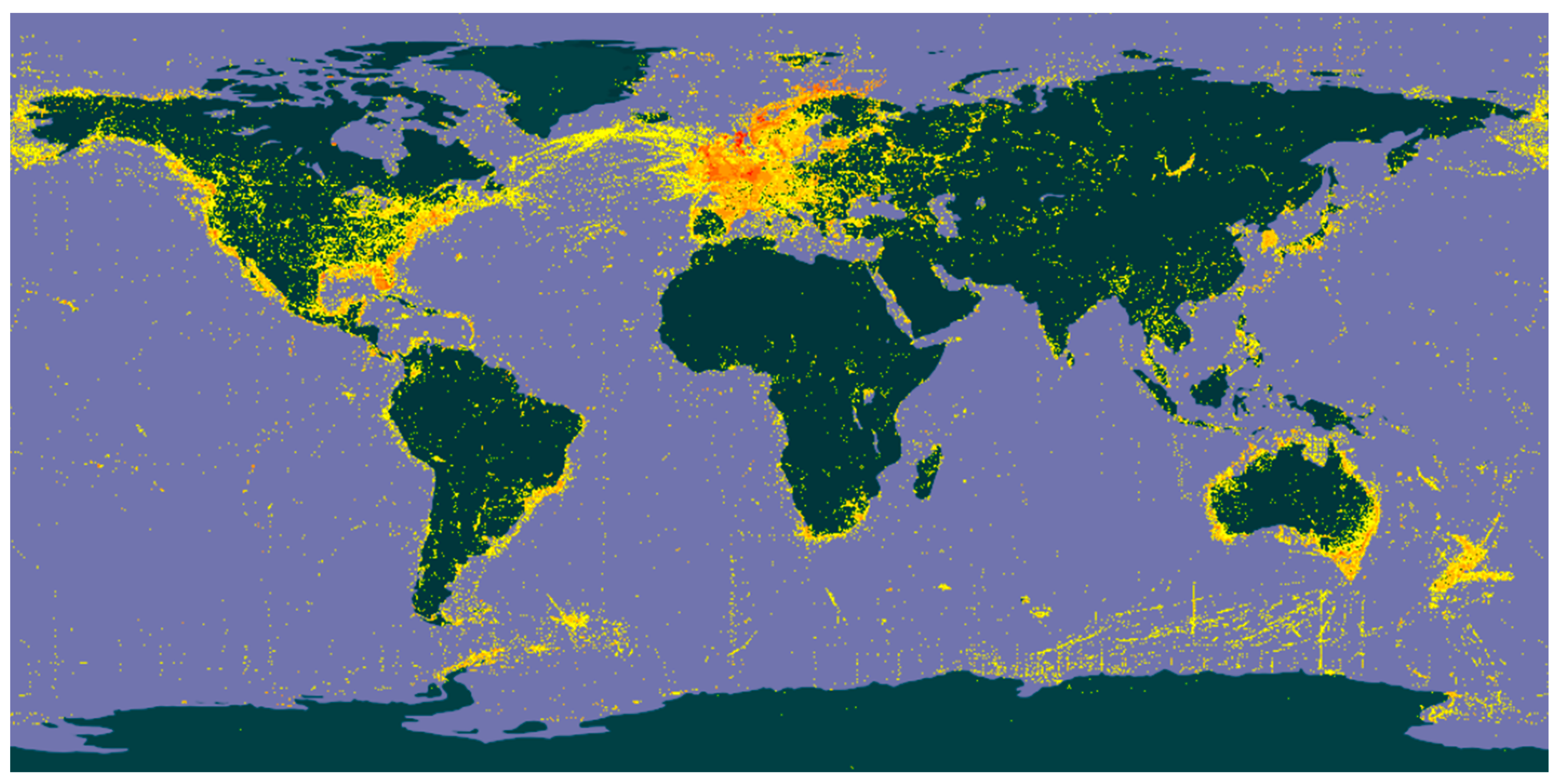