Diversity and Structure of an Arid Woodland in Southwest Angola, with Comparison to the Wider Miombo Ecoregion

African rainforests (ARFs) are species rich and occur in two main rainforest blocks: West/Central and East Africa. This diversity is suggested to be the result of recent diversification, high extinction rates and multiple vicariance events between west/central and East African forests. We reconstructed the diversification history of two subtribes (Annickieae and Piptostigmateae) from the ecologically dominant and diverse tropical rainforest plant family Annonaceae. Both tribes contain endemic taxa in the rainforests of West/Central and East Africa. Using a dated molecular phylogeny based on 32 nuclear markers, we estimated the timing of the origin of East African species. We then undertook several diversification analyses focusing on Piptostigmateae to infer variation in speciation and extinction rates, and test the impact of extinction events. Speciation in both tribes dated to the Pliocene and Pleistocene. In particular, Piptostigma (13 species) diversified mainly during the Pleistocene, representing one of the few examples of Pleistocene speciation in an African tree genus. Our results also provide evidence of an ARF fragmentation at the mid-Miocene linked to climatic changes across the region. Overall, our results suggest that continental-wide forest fragmentation during the Neogene (23.03–2.58 Myr), and potentially during the Pliocene, led to one or possibly two vicariance events within the ARF clade Piptostigmateae, in line with other studies. Among those tested, the best fitting diversification model was the one with an exponential speciation rate and no extinction. We did not detect any evidence of mass extinction events. This study gives weight to the idea that the ARF might not have been so negatively impacted by extinction during the Neogene, and that speciation mainly took place during the Pliocene and Pleistocene. View Full-Text
Keywords: biogeographic vicariance; extinction; phylogenomics; gene shopping; gene capture; molecular dating biogeographic vicariance; extinction; phylogenomics; gene shopping; gene capture; molecular dating
►▼ Show Figures 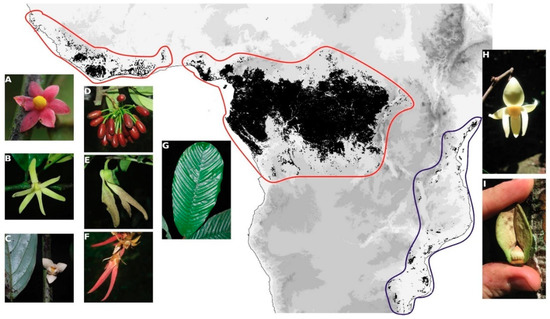