Endosymbiotic Green Algae in Paramecium bursaria: A New Isolation Method and a Simple Diagnostic PCR Approach for the Identification
Previous Article in Journal

Tatyana Darienko
3
1
Research Department for Limnology, Leopold-Franzens-University of Innsbruck, Mondsee, A-5310 Mondsee, Austria
2
Limnological Station, Department of Plant and Microbial Biology, University of Zürich, CH-8802 Kilchberg, Switzerland
3
Albrecht-von-Haller-Institute of Plant Sciences, Experimental Phycology and Culture Collection of Algae, Georg-August-University of Göttingen, D-37073 Göttingen, Germany
*
Author to whom correspondence should be addressed.
Diversity 2020, 12(5), 200; https://doi.org/10.3390/d12050200
Received: 28 April 2020 / Revised: 13 May 2020 / Accepted: 13 May 2020 / Published: 15 May 2020
(This article belongs to the Special Issue Biodiversity of Ciliates and their Symbionts)

Endosymbiosis between coccoid green algae and ciliates are widely distributed and occur in various phylogenetic lineages among the Ciliophora. Most mixotrophic ciliates live in symbiosis with different species and genera of the so-called Chlorella clade (Trebouxiophyceae). The mixotrophic ciliates can be differentiated into two groups: (i) obligate, which always live in symbiosis with such green algae and are rarely algae-free and (ii) facultative, which formed under certain circumstances such as in anoxic environments an association with algae. A case of the facultative endosymbiosis is found in the recently described species of Tetrahymena, T. utriculariae, which lives in the bladder traps of the carnivorous aquatic plant Utricularia reflexa. The green endosymbiont of this ciliate belonged to the genus Micractinium. We characterized the isolated algal strain using an integrative approach and compared it to all described species of this genus. The phylogenetic analyses using complex evolutionary secondary structure-based models revealed that this endosymbiont represents a new species of Micractinium, M. tetrahymenae sp. nov., which was further confirmed by the ITS2/CBC approach. View Full-Text
Keywords: Micractinium tetrahymenae; Tetrahymena; Utricularia; facultative endosymbiosis; ciliate-algae symbiosis Micractinium tetrahymenae; Tetrahymena; Utricularia; facultative endosymbiosis; ciliate-algae symbiosis
►▼ Show Figures 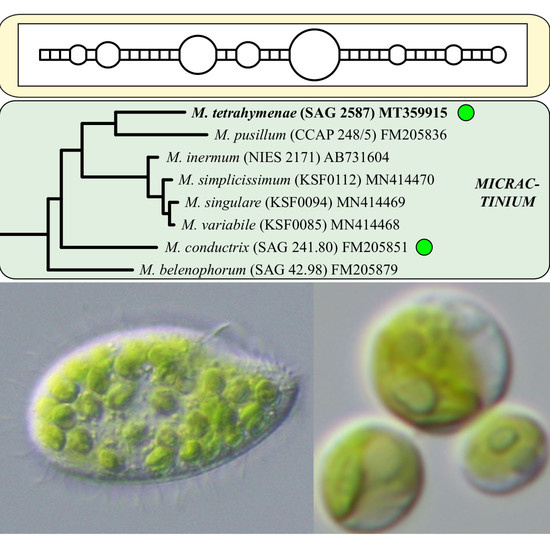