While over hundreds of terrestrial fungal genera have been shown to play important roles in the biodegradation of hydrocarbons, few studies have so far focused on the fungal bioremediation potential of petroleum in the marine environment. In this study, the culturable fungal communities occurring in the port of Oran in Algeria, considered here as a chronically-contaminated site, have been mainly analyzed in terms of species richness. A collection of 84 filamentous fungi has been established from seawater samples and then the fungi were screened for their ability to utilize and degrade crude oil. A total of 12 isolates were able to utilize crude oil as a unique carbon source, from which 4 were defined as the most promising biodegrading isolates based on a screening test using 2,6-dichlorophenol indophenol as a proxy to highlight their ability to metabolize crude oil. The biosurfactant production capability was also tested and, interestingly, the oil spreading and drop-collapse tests highlighted that the 4 most promising isolates were also those able to produce the highest quantity of biosurfactants. The results generated in this study demonstrate that the most promising fungal isolates, namely Penicillium polonicum AMF16, P. chrysogenum AMF47 and 2 isolates (AMF40 and AMF74) affiliated to P. cyclopium, appear to be interesting candidates for bioremediation of crude oil pollution in the marine environment within the frame of bioaugmentation or biostimulation processes. View Full-Text
Keywords: marine fungi; crude oil; biodegradation; DCPIP; biosurfactant marine fungi; crude oil; biodegradation; DCPIP; biosurfactant
►▼ Show Figures 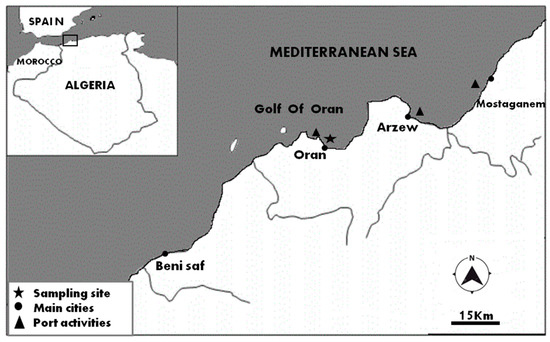