The Diversity Distribution Pattern of Ruderal Community under the Rapid Urbanization in Hangzhou, East China
Previous Article in Special Issue

During the greenhouse conditions prevailing in the early–middle Eocene, larger benthic foraminifers (LBF) spread out on carbonate platforms worldwide while rhodolith beds were scarcely represented. This reduction in rhodolith beds coincided with a relative decrease in coralline algal diversity and with a drastic decline of coral reef abundance. Middle Eocene rhodoliths from two tropical (San Jacinto Fold Belt in northern Colombia and Bahoruco Peninsula in the Dominican Republic) and two mid-latitude (Salinas Menores Ravine and Sierra del Zacatín in Southern Spain) localities were studied. Rhodolith rudstones in the tropical areas accumulated on relatively deep (several tens of meters) platform environments and were also redeposited in deeper settings downslope. In Salinas Menores, rhodoliths are dispersed in planktic foraminifer-rich marls. Miliolids are common in the infilling of constructional voids in these rhodoliths, indicating that they originally grew in shallow-water inner-shelf settings and afterwards they were transported to deeper environments. In Sierra del Zacatín, rhodoliths are scarce and coralline algae mainly occur as crusts attached to and intergrowing with corals. Here, LBF dominated shallow-water carbonate platforms. In terms of taxonomic composition, coralline algae of the order Hapalidiales are the most abundant in the study areas, followed by Sporolithales. The order Corallinales is poorly represented except in Salinas Menores, where it is relatively abundant and diverse. The impact of high temperatures due to high levels of atmospheric CO2 during the Eocene and widespread oligotrophic conditions, which favored formation of LBF-rich lithofacies, might account for the low abundance of rhodolith beds at mid and high latitudes. In contrast, the more productive equatorial regions would have favored the formation of rhodolith beds. View Full-Text
Keywords: calcareous red algae; larger foraminifer lithofacies; Eocene; Southern Spain; Colombia; Dominican Republic calcareous red algae; larger foraminifer lithofacies; Eocene; Southern Spain; Colombia; Dominican Republic
►▼ Show Figures 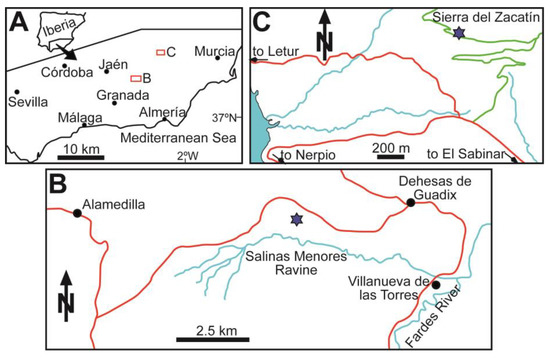