The Legacy of the Past Logging: How Forest Structure Affects Different Facets of Understory Plant Diversity in Abandoned Coppice Forests
Previous Article in Special Issue

New Records of Antarctic Tardigrada with Comments on Interpopulation Variability of the Paramacrobiotus fairbanksi Schill, Förster, Dandekar and Wolf, 2010

Tardigrades are microscopic invertebrates that can withstand complete desiccation, but their interspecies interactions with prokaryotes and eukaryotes within their microhabitat remain relatively unexplored. Here, I utilized combined metabarcoding of eukaryotes and prokaryotes to simultaneously identify entire community structures within xeric and mesic mosses that harbor tardigrades. The populations of organisms within the microecosystems were successfully determined in 45 xeric moss samples and 47 mesic moss samples. Organismal composition was largely consistent regardless of the moss/lichen substrate, but significantly varied in the two tested locations, possibly because of the differences in environmental humidity. Xeric mosses containing xerophilic tardigrades and other anhydrobiotic invertebrates tended to have significantly limited biological diversity and prokaryotic population dominated by cyanobacteria, suggesting a selection due to extreme desiccation. A combined metabarcoding approach to identify both eukaryotes and prokaryotes can successfully elucidate community structures within microscopic ecosystems, and this can be a potential approach to study the microecology of meiofauna, including tardigrades. View Full-Text
Keywords: tardigrade; moss; metabarcoding; microhabitat; high-throughput sequencing; microecology tardigrade; moss; metabarcoding; microhabitat; high-throughput sequencing; microecology
►▼ Show Figures 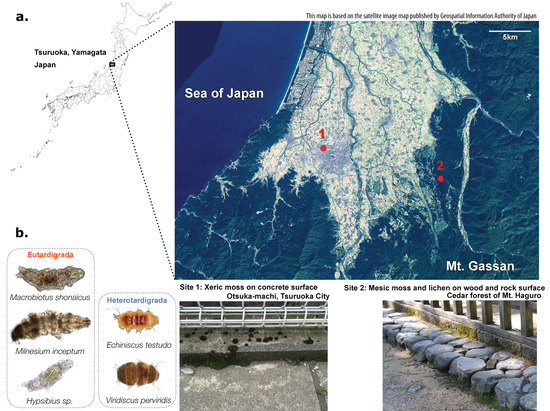 
Arakawa, Kazuharu. 2020. "Simultaneous Metabarcoding of Eukaryotes and Prokaryotes to Elucidate the Community Structures within Tardigrade Microhabitats." Diversity 12, no. 3: 110.