Our knowledge of early evolution of snakes is improving, but all that we can infer about the evolution of modern clades of snakes such as boas (Booidea) is still based on isolated bones. Here, we resolve the phylogenetic relationships of Eoconstrictor fischeri comb. nov. and other booids from the early-middle Eocene of Messel (Germany), the best-known fossil snake assemblage yet discovered. Our combined analyses demonstrate an affinity of Eoconstrictor with Neotropical boas, thus entailing a South America-to-Europe dispersal event. Other booid species from Messel are related to different New World clades, reinforcing the cosmopolitan nature of the Messel booid fauna. Our analyses indicate that Eoconstrictor was a terrestrial, medium- to large-bodied snake that bore labial pit organs in the upper jaw, the earliest evidence that the visual system in snakes incorporated the infrared spectrum. Evaluation of the known palaeobiology of Eoconstrictor provides no evidence that pit organs played a role in the predator–prey relations of this stem boid. At the same time, the morphological diversity of Messel booids reflects the occupation of several terrestrial macrohabitats, and even in the earliest booid community the relation between pit organs and body size is similar to that seen in booids today. View Full-Text
Keywords: Boidae; Messel Formation; Eocene; pit organs; infrared; macrohabitat; biogeography Boidae; Messel Formation; Eocene; pit organs; infrared; macrohabitat; biogeography
►▼ Show Figures 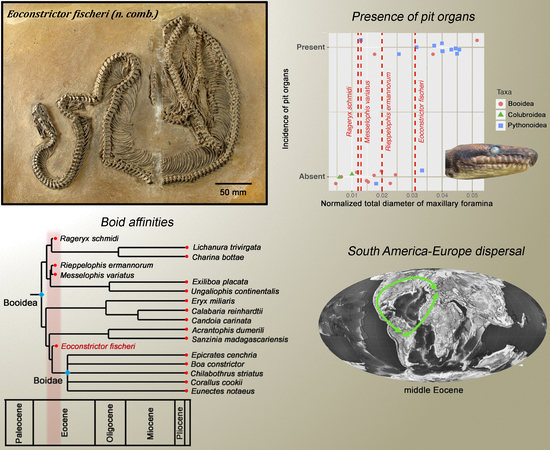