Biosphere reserves, designated under The United Nations Education, Scientific and Cultural Organization’s (UNESCO) Man and Biosphere Programme, aim to sustainably integrate protected areas into the biological and economic landscape around them by buffering strictly protected habitats with zones of limited use. However, the effectiveness of biosphere reserves and the contribution of the different zones of use to protection is poorly known. We assessed the diversity and activity of bats in the Crocker Range Biosphere Reserve (CRBR) in Sabah, Malaysia, using harp traps, mist nets and acoustic surveys in each zone—core, buffer, transition and in agricultural plots outside of the reserve. We captured 30 species, bringing the known bat fauna of CRBR to 50 species, half of Borneo’s bat species. Species composition and acoustic activity varied among zones and by foraging ensemble, with the core and buffer showing particular importance for conserving forest-dependent insectivorous bats. Frugivorous bats were found in all zones but were the most abundant and most species-rich ensemble within agricultural sites. Although sampling was limited, bat diversity and activity was low in the transition zone compared to other zones, indicating potential for management practices that increase food availability and enhance biodiversity value. We conclude that, collectively, the zones of the CRBR effectively protect diversity, but the value of the transition zone can be improved. View Full-Text
Keywords: Man and Biosphere; Crocker Range; Chiroptera; bat diversity; land-use change; foraging ensembles Man and Biosphere; Crocker Range; Chiroptera; bat diversity; land-use change; foraging ensembles
►▼ Show Figures 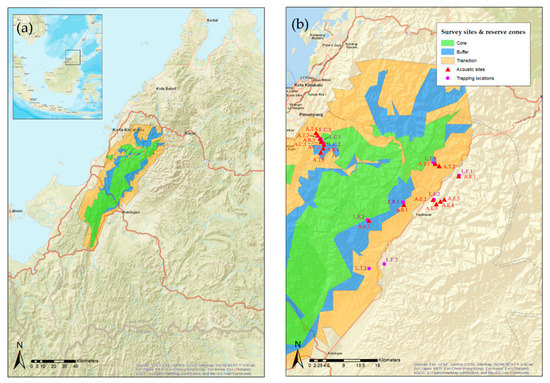