Paraseriantheslophantha subsp. lophantha (Leguminosae) is native to southwestern Australia, but has become naturalized in eastern Australia and in countries around the world. Previous studies have investigated the introduction sources for P. lophantha subsp. lophantha overseas, but here, we expand on the knowledge of genetic patterns in its native and naturalized range in Australia. Genetic patterns were examined using nine nuclear microsatellite loci and three chloroplast DNA markers. The native populations exhibited phylogeographic patterns, including north-south differentiation, and a genetic signal related to temperature gradients. Naturalized Australian populations displayed lower overall genetic variation and no phylogeographic patterns. Several naturalized populations separated by large distances (350–650 km) shared multi-locus genotypes, supporting the notion of a shared source of germplasm and possible inbreeding due to human-mediated introductions from a limited number of individuals and/or source populations within the native range. We advocate that management strategies are tailored to the distinct conservation aims underpinning conservation in native or naturalized populations. Within the native distribution, management should have a long-term aim to replicate historical evolutionary processes, whereas in naturalized populations, immediate actions may be required to reduce the abundance of P. lophantha subsp. lophantha and minimize its invasive impact on the recipient vegetation. View Full-Text
Keywords: population genetics; naturalization; range expansion; Leguminosae population genetics; naturalization; range expansion; Leguminosae
►▼ Show Figures 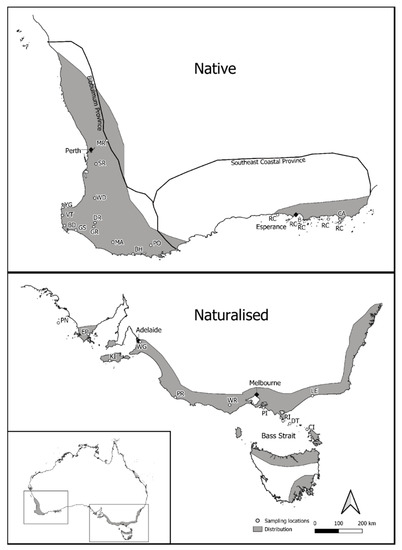