Perception of Changes in Marine Benthic Habitats: The Relevance of Taxonomic and Ecological Memory
Previous Article in Journal

Filling the Gap and Improving Conservation: How IUCN Red Lists and Historical Scientific Data Can Shed More Light on Threatened Sharks in the Italian Seas

The knowledge on the hard bottom polychaete assemblages in the Northern Adriatic Sea, a Mediterranean region strongly affected by environmental pressures, is scarce and outdated. The objective of this paper was to update the information on polychaete diversity and depict their patterns of natural spatial variation, in relation to changes in algal coverage at increasing depth. Hard bottom benthos was quantitatively sampled by scraping off the substrate from three stations at Sveti Ivan Island (North Adriatic) at three depths (1.5 m, 5 m and 25 m). Polychaete fauna comprised 107 taxa (the majority of them identified at species level) belonging to 22 families, with the family Syllidae ranking first in terms of number of species, followed by Sabellidae, Nereididae, Eunicidae and Serpulidae. Considering the number of polychaete species and their identity, the present data differed considerably from previous studies carried out in the area. Two alien species, Lepidonotus tenuisetosus, which represented a new record for the Adriatic Sea, and Nereis persica, were recorded. The highest mean abundance, species diversity and internal structural similarity of polychaete assemblages were found at 5 m depth, characterised by complex and heterogeneous algal habitat. The DISTLM forward analysis revealed that the distribution of several algal taxa as well as some algal functional-morphological groups significantly explained the observed distribution patterns of abundance and diversity of polychaete assemblages. The diversity of the North Adriatic hard bottom polychaete fauna is largely underestimated and needs regular updating in order to detect and monitor changes of benthic communities in the area. View Full-Text
Keywords: Annelida; Polychaeta; benthos; community structure; algae Annelida; Polychaeta; benthos; community structure; algae
►▼ Show Figures 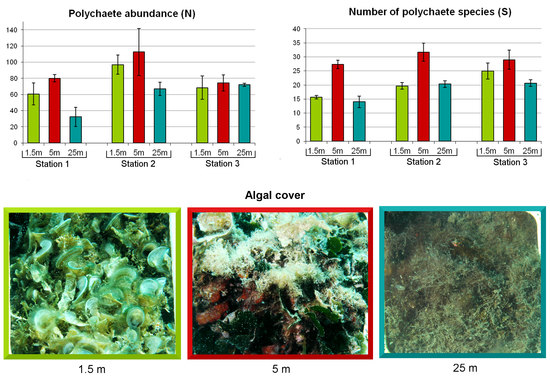