An Assessment of the Influence of Host Species, Age, and Thallus Part on Kelp-Associated Diatoms

Megadiversity in the Ant Genus Melophorus: The M. rufoniger Heterick, Castalanelli and Shattuck Species Group in the Top End of Australia’s Northern Territory

This study contributes to an understanding of megadiversity in the arid-adapted ant genus Melophorus by presenting an integrated genetic, morphological and distributional analysis of diversity within the M. rufoniger group in the 400,000 km2 Top End (northern region) of Australia’s Northern Territory. An earlier study of the Top End’s ant fauna lists eleven species from the M. rufoniger group, but a recent revision of Melophorus described the taxon as a single species occurring throughout most of the Australian mainland. CO1 sequences were obtained for 120 Top End specimens of the M. rufoniger group, along with a specimen from just outside the Top End. We recognize a total of 30 species among the sequenced specimens from the Top End, based on marked CO1 divergence (mean > 9%) in association with morphological differentiation and/or sympatric distribution. The sequenced specimen from just outside the Top End represents an additional species. Our unpublished CO1 data from other specimens from elsewhere in monsoonal Australia indicate that all but two of the 30 sequenced Top End species are endemic to the region, and that such diversity and endemism are similar in both the Kimberley region of far northern Western Australia and in North Queensland. The total number of species in the M. rufoniger group is potentially more than the 93 total species of Melophorus recognized in the recent revision. It has previously been estimated that Melophorus contains at least 1000 species, but our findings suggest that this is a conservative estimate. View Full-Text
Keywords: ant diversity; cryptic species; morphospecies; species delimitation; sympatric association ant diversity; cryptic species; morphospecies; species delimitation; sympatric association
►▼ Show Figures 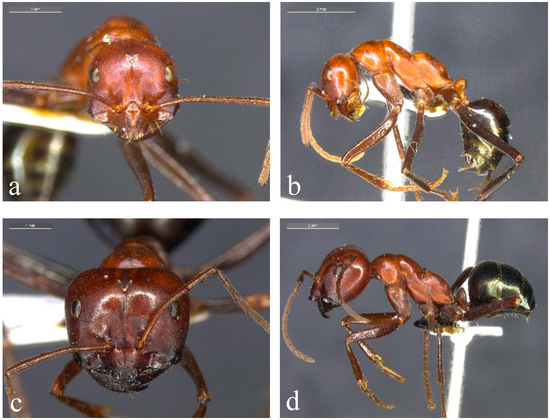